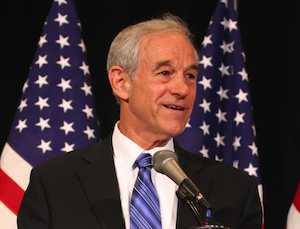 In a huge blow to the hopes of libertarian Rob Sarvis, former Libertarian Party candidate for President Ron Paul chooses Ken Cuccinelli as the candidate most likely to advance the cause of liberty.

“Ken Cuccinelli has always stood for smaller government and limited government, he has consistenly and unapologetically worked with the Liberty movement in Virginia. His stand against ObamaCare shows he is willing to stand up to Washington’s continued abuses on our individual liberties. I am proud to endorse to Ken for Governor of Virginia.”

Full text of the endorsement can be found below. This is great news for those who care about advancing liberty in Virginia, and throughout the United States.

Based on an examination of Dr Paul’s history, it appears that he will endorse almost any candidate that asks him for an endorsement. He endorsed me for Congress in 1992 when I ran as a Libertarian, after I wrote a letter noting my involvement as a County Coordinator of his campaign for President in 1988.

Presumably Ken Cuccinelli solicited an endorsement because he has seen many Virginia voters saying they will vote for Robert Sarvis, the Libertarian candidate.

The one big issue Ron Paul mentions in endorsing Cuccinelli is the lawsuit against the Affordable Care Act. If anything, that lawsuit backfired. Justice Roberts may have had issues with the ACA, but he did not want to put the court in the position of overturning a major law passed by Congress, so he voted against declaring it unconstitutional. Supporters of Obamacare have since used the court decision to argue against critics who continue to point out the unconstitutional features of ACA.

Which libertarian policy has been advanced in the last 30+ years of “leveraging” within the GOP?
Is it?
1/The War on Drugs?
2/NDAA?
3/Patriot Act?
4/17 Trillion Dollar Debt?
5/Ending the IRS?
6/Ending the Department of Education? (Like REAGAN promised)
7/NSA?
8/Wars in Iraq, Afghanistan, Libya, Pakistan, Yemen, Somalia, and now occupying 47 countries in Africa?

Shall I continue?
Your argument would make all the sense in the world.
If it made any sense at all.

Keep endorsing and voting for a corrupt and statist GOP and you keep getting the lesser of two evils.
Brilliant.

How successful has the Libertarian Party been in winning an election? It’s a battle for the heart and soul of the Republican Party and thanks to the Justin Amash’s and Thom Massie’s we’re on the winning side. It won’t happen overnight, but it’s more than the Libertarian Party itself will ever do. By the way, calling Ron Paul a quisling and a coward is very brave of you “Islander505.” How about you run for Congress, stand up to and buck the establishment, and start a libertarian revolution with the youth? Douche.

Douche? Nice one..Wassamatta? Did I hit a nerve?

“By the way, calling Ron Paul a quisling and a coward is very brave of you “Islander505.””
Thank you. I agree. It isn’t easy (or safe) offending the hypersensitivities of Paulbots. You all have a consistent track record of overreacting to ANY criticism of your chosen savior.

“How about you run for Congress, stand up to and buck the establishment, and start a libertarian revolution with the youth?”
I agree. Ron Paul has done some wonderful work through the years. It’s a shame he is destroying his his legacy by selling out to the GOP now, with late Friday night endorsements of corrupt neocon GOP candidates for a few pieces of gold.
Would it shock you if I told you that I worked on the Paul Presidential Campaign in 1988? And then watched him try to kidnap the LP with his brand of hateful Paleo-Libertarianism following the election? Before he left (kicked out) for the GOP?
And that I still supported him when he joined the GOP?
And applauded what he did beginning in 2007 in capturing the youth?

Must really shock you to discover that this old timer now recognizes him for what he is.
Nothing more than a Pied Piper for the GOP. Marshaling and leading those same youth into the Liberty abyss that is the GOP. Where great ideas for Liberty and Freedom enter and are never seen or heard from again. Except for an occasional sound byte on youtube.

I suggest that you should load up on some Summer’s Eve for your personal use. You’ve overlooked some of the residue leftover from the love you received at the Tampa GOP Convention.

How successful has the Republican party been at Liberty? That is a better question. Just because a party can win, does not mean they have our best interests at heart. The Libertarian party will win elections on a higher level soon enough. And I think that is what scares you more than anything else. Regarding Liberty, it’s either all or nothing. There is no “half a freedom,” no matter how much the GOP tries to convince you that such a thing exists.

Joshua, you’re right, Dr. Paul is consistent. He endorsed Ken in 2009 and in 2013. Unlike Sarvis who endorsed Cuccinelli in 2009 (While running for state senate as a Republican) and is now running against Cuccinelli because…something has changed in that time? Paul is the same. Cuccinelli is the same. Sarvis…confused maybe?

Question,
where did you see Sarvis endorsed Ken in 09?

He did not endorse Ken in 2009. But he did vote for him. As I stated above, I think many people now regret that. I sure as hell know I do.

Uh, no. Cuccinelli went off the deep end shortly after getting elected. I think we all regret voting for him. Those who vote out of fear, will lie and say they are comfortable voting for him in 2013 simply because they are voting out of fear. And guess what? Cuccinelli isn’t going to win. So you will walk away from the polls with absolutely nothing. No integrity, no principles, and nothing else to show for your vote. On the other hand, you could vote for Sarvis and help the Libertarian Party gain ballot access and in some small way enhance the cause of Liberty. And who knows, with Ken and terry’s still falling poll numbers, Sarvis might win. But even if not, Cooch has no chance. Not one. But, if you’re comfortable walking away from the polls having become a gutless wonder, by all means cast your vote for him. My guess is that you became a gutless wonder in 2012 by casting a vote for Willard Romney. How did that work out for you???

I don’t think anyone expected Dr. Paul to endorse Robert Sarvis, and, if you will recall, Paul endorsed Cuccinelli back in 2009, so calling it a “huge blow” isn’t really accurate.

Well Done Dr. Paul…
You have rightfully announced to the world that you have become a QUISLING within the Libertarian Movement.

Not only that, but by releasing this endorsement after hours on a Friday night for minimum press exposure, you have also demonstrated that you are a COWARD.

I agree. Ron just shot himself in the foot with the Liberty movement. You should see the number of people cancelling their subscriptions to his newsletter. And he didn’t even have to say anything anti-semitic this time.