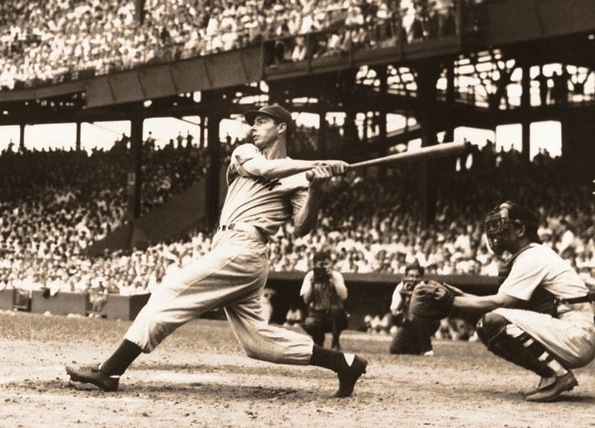 Rooting for the Yankees, Then and Now

When I was growing up in Allentown, PA – a small city about 50 miles north of Philadelphia – I and most of my buddies followed and rooted for the Phillies of baseball’s National League. We thought of them as “our team.” Sure, they were mediocre during most of our formative years, but we still admired their players and faithfully listened to their games – often late into the night in darkened bedrooms, with the radio turned low so our parents wouldn’t hear.

The Phillies were founded way back in 1883, but by the 1950s they had been in the World Series only twice – in 1915, when even my pop hadn’t been born, and in 1950, when I was still too young to know what baseball was or what was happening in the Majors. The Phillies lost the 1915 series to Smoky Joe Wood and the great Boston Red Sox, winning only a single game behind the pitching of Grover Cleveland Alexander. And in 1950 Joe DiMaggio, Yogi Berra and the Yankees swept the Phillies’ Whiz Kids in four straight. Thereafter, all through the ‘50s, the Phillies were a second-division club, despite the great pitching of Robin Roberts and the high-average hitting of Richie Ashburn.

In spite of their lackluster record, we loved those guys, and we wouldn’t have dreamt of pulling for any other team. Our only brief exceptions were rooting for the Dodgers and other National League teams in several World Series. After all, those were respected rivals of our beloved Phillies. Rooting for the hated Yankees would have been an act of rank disloyalty.

Nevertheless, some of our peers were consistent Yankee fans. They weren’t bad guys, but we couldn’t figure how they could be so disloyal to the Phillies as to root for the Yankees. It was a long time – well into my adult life – before I understood that a certain kind of person always roots for winning teams. Loyalty is not in their equation. I think I finally saw this when I saw some colleagues and neighbors rooting for the (gasp!) Dallas Cowboys instead of for our beloved Washington Redskins, while I was raising my family in Maryland. Those folks pulled for America’s Team (as the Cowboys fancied themselves) because they were consistent winners. Not my style, though – a complete cultural disconnect.

I hadn’t thought much about those dynamics of teams, loyalties and winners until recent years, when I saw State Department spokeswomen on TV, trying to explain why young men from Europe and America were joining Islamic armed forces. Al Qaeda and ISIS armies were making war, capturing towns, blowing things up, beheading hostages, and romping all over the Middle East.

Countries too small and too weak to put up much of a fight were trying to stand against the Islamists, while powerful nations like ours were sending girls out to explain that we were not really at war with Islam, and proposing crack-brained plans to “help” the terrorists with jobs-programs. Our Nobel Peace Prize-winning president declared that the villains beheading Christians, shooting Jews and bombing everything all to hell were not true Muslims, but frauds who had hijacked a great and peaceful faith. They simply needed to be shown a better way. As the West Side Jets famously explained:

“We can’t kill our way to victory,” said State Department Spokeswoman Marie Harf – a well-turned-out blonde who probably wouldn’t know a cannon from a kumquat. (If her brilliant observation doesn’t make Bartlett’s Familiar Quotations, next to Marion Barry’s “Bitch set me up,” then I’ll admit that I don’t know nuhthin’ about nuhthin’.) But I digress…

The young Americans and Europeans then joining ISIS were an intriguing parallel to those long-ago days of the winning Yankees. The Bronx Bombers didn’t use actual bombs in the Nifty 50s, but they were almost unstoppable. Their string of successes attracted numbers of “good-time” fans who wanted to join the victory party. (None of those fair weather fans actually got to join the team, however, as far as I know.)

All joking aside, ISIS armies were on a victorious roll of their own for several years – doing whatever they wanted, with no one able to stop them. Leaders of the strongest nations on earth looked like a bunch of bumbling fools, while gangs of young toughs struck heroic poses – brandishing automatic weapons, cheering, and firing bursts into the air.

Thousands of idle young men across the globe watched those TV images and pictured themselves on that winning team. They wanted to join the fun. It probably never occurred to most of them that they might actually get shot to pieces, once the world’s “sleeping giant” got its act together. Mr. Obama – who famously said he was elected to “stop wars, not start them” – ran out the clock before he had to do much fighting. But after he left office the doo-doo finally hit the fan – at least for ISIS. Their glorious victory-parade was busted up, and a lot of people got hurt.

Homeland Security and State officials have called home-grown wannabe jihadists some of our worst security-threats. Commentators and pundits scratched their heads over those young men who were heading for the Middle East to join ISIS. Why they were going there, and how to stop them became our great public riddle during the Obama regime.

That riddle prompted the State Department’s spokeswomen to theorize that these young people needed jobs because they simply didn’t have enough productive work to do – idle hands being the “Devil’s tool,” and all that. No doubt many of them were frustrated because they couldn’t become college presidents or get Hollywood careers started. (Probably because of racism. What else could explain it?)

But a better strategy than the “jobs” initiative was available to keep western young men from joining ISIS. To frame the strategy, let’s ask how many of those fair-weather Yankee fans stayed faithful, once the Yankees’ mystique faded. Not very many, I ween. When the winning stops, fans like that just fade away. It stops being fun and interesting when “their team” is no longer on top.

The same turned out to be true for those young ISIS-fans. Once we had a different kind of president, and ISIS was no longer running wild across the Middle East, the eager volunteers from Europe and the USA lost interest. The grim casualty-reports dried up the supply of cannon-fodder because the whole thing had stopped being a dependably romantic adventure. After all, why leave a cushy college life and a nice girlfriend to get blown up by a suicide bomb? Winning is great. Losing stinks.

“There’s no substitute for victory,” wrote General Douglas MacArthur2, after we fought to a bloody “draw” in Korea. You don’t have to be a Ph-doctor in history to see what a mess we inherited by leaving that war undecided. The dangerous remnant of an uncontrolled North Korea has bedeviled us for 70 years, with no end in sight.

Miss Harf’s theory notwithstanding, winning on the battlefield was still the real answer to the ISIS-problem. If you really want to dry up an enemy’s manpower-resources, nothing will do it like a serious butt-kicking. Jobs, encounter groups, and a sensitive hearing of “grievances” had nothing to do with the war that Islamic extremists were waging on the West. People who suggest these “solutions” are disconnected from reality.

Finally, in the interest of restoring sanity for the millions of American veterans who shouted at their TV sets until they ended up in the mental hospital’s wing for people so-afflicted: could we declare a moratorium on sending girls out to argue that we can’t win wars by shooting? (They were interesting to look at but, really, the shtick is getting old.)

Fortunately, we did something besides talk before the heroic Islamic “freedom fighters” came down the chimney and A-bombed the Port of New York. We finally got serious and elected a president who understood that war ain’t beanbag, and we can’t just nice-talk our way out of it. We’re not finished yet with those villains over there, but at least we’re on the right track.

Rooting for the Yankees, Then and Now was last modified: July 18th, 2019 by Woody Zimmerman