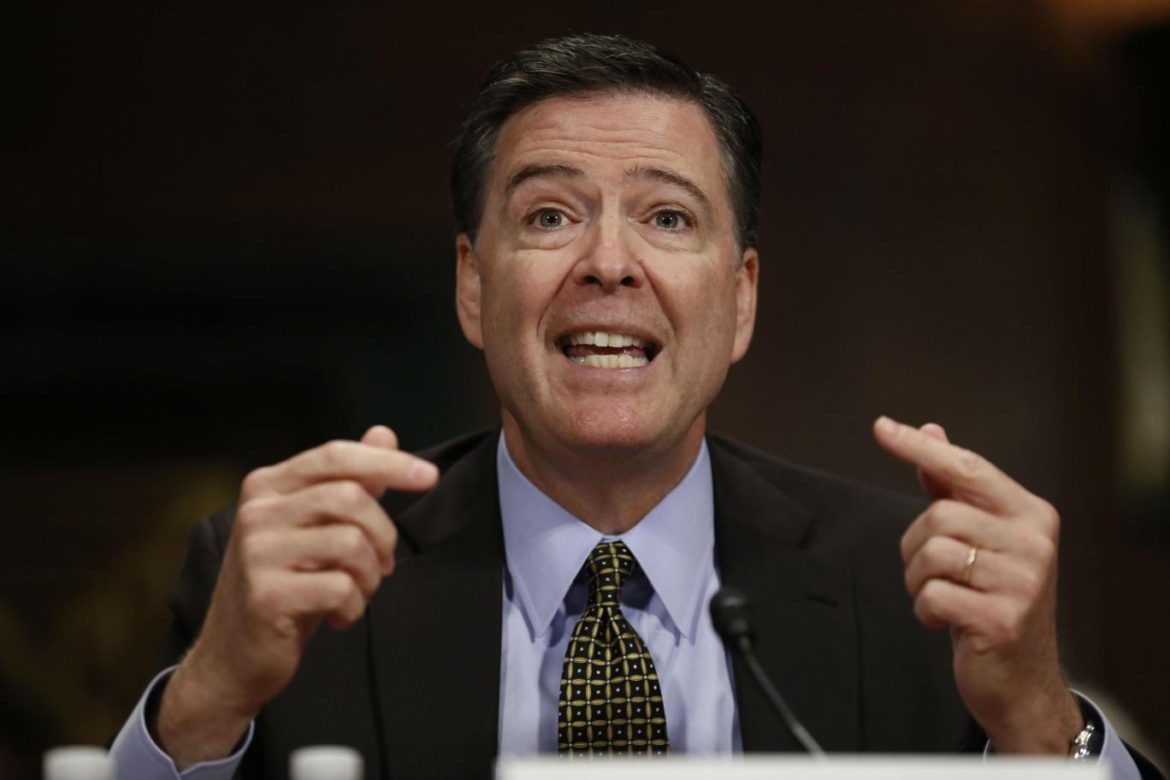 We conservatives like to pride ourselves on supporting the rule of law and making policy and legislation based on facts – not fantasy.

So, would it not behoove us to look at the actual text of Deputy Attorney General Rod Rosenstein’s memo, which outlines the reasons for firing James Comey as FBI Director?

Other than some newspapers, the 24-hour networks have not provided these details for their viewers and so politicians – including many Republicans – are jumping all over President Trump for his decision to replace Comey.

Here is the full memo from Rosenstein, who spent a 30-year career in a civil servant capacity in the Justice Department, was appointed to be U.S. Attorney for Maryland by former President Obama and then appointed as Deputy Attorney General by President Trump, and confirmed by the U.S. Senate in a whopping 96-4 vote:

I bolded the KEY findings. The full memo and Sessions and Trump letters can be found here.

The Federal Bureau of Investigation has long been regarded as our nation’s premier federal investigative agency. Over the past year, however, the FBl’s reputation and credibility have suffered substantial damage, and it has affected the entire Department of Justice. That is deeply troubling to many Department employees and veterans, legislators and citizens. The current FBI Director is an articulate and persuasive speaker about leadership and the immutable principles of the Department of Justice. He deserves our appreciation for his public service.

As you and I have discussed, however, I cannot defend the Director’s handling of the conclusion of the investigation of Secretary Clinton’s emails, and I do not understand his refusal to accept the nearly universal judgment that he was mistaken.

Almost everyone agrees that the Director made serious mistakes; it is one of the few issues that unites people of diverse perspectives. The Director was wrong to usurp the Attorney General’s authority on July 5, 2016, and announce his conclusion that the case should be closed without prosecution. It is not the function of the Director to make such an announcement. At most, the Director should have said the FBI had completed its investigation and presented its findings to federal prosecutors.

The Director now defends his decision by asserting that he believed Attorney General Loretta had a conflict. But the FBI Director is never empowered to supplant federal prosecutors and assume command of the Justice Department. There is a well-established process for other officials to step in when a conflict requires the recusal of the Attorney General. On July 5, however, the Director announced his own conclusions about the nation’s most sensitive criminal investigation, without the authorization of duly appointed Justice Department leaders. Compounding the error, the Director ignored another longstanding principle: we do not hold press conferences to release derogatory information about the subject of a declined criminal investigation. Derogatory information sometimes is disclosed in the course of criminal investigations and prosecutions, but we never release it gratuitously. The Director laid out his version of the facts for the news media as if it were a closing argument, but without a trial. It is a textbook example of what federal prosecutors and agents are taught not to do.

In response to skeptical questions at a congressional hearing, the Director defended his remarks by saying that his goal was to say what is true. What did we do, what did we find, what do we think about it. But the goal of a federal criminal investigation is not to announce our thoughts at a press conference. The goal is to determine whether there is sufficient evidence to justify a federal criminal prosecution, then allow a federal prosecutor who exercises authority delegated by the Attorney General to make a prosecutorial decision, and then if prosecution is warranted – let the judge and jury determine the facts. We sometimes release information about closed investigations in appropriate ways, but the FBI does not do it sua sponte.

Concerning his letter to the Congress on October 28, 2016, the Director cast his decision as a choice between whether he would speak about the decision to investigate the newly-discovered email messages or conceal it. Conceal is a loaded term that necessitates the issue. When federal agents and prosecutors quietly open a criminal investigation, we are not concealing anything; we are simply following the longstanding policy that we refrain from publicizing non-public information. In that context, silence is not concealment.

My perspective on these issues is shared by former Attorneys General and Deputy Attorneys General from different eras and both political parties. Judge Laurence Silberman, who served as Deputy Attorney General under President Ford, wrote that it is not the bureau’s responsibility to opine on whether a matter should be prosecuted. Silberman believes that the Director’s performance was so inappropriate for an FBI director that [he] doubt[s] the bureau will ever completely recover. Jamie Gorelick, Deputy Attorney General under President Clinton, joined with Larry Thompson, Deputy Attorney General under President George W. Bush, to opine that the Director had chosen personally to restrike the balance between transparency and fairness, departing from the department’s traditions. They concluded that the Director violated his obligation to preserve, protect and defend the traditions of the Department and the FBI.

Former Deputy Attorneys General Gorelick and Thompson described the unusual events as real-time, raw-take transparency taken to its illogical limit, a kind of reality TV of federal criminal investigation, that is antithetical to the interests of justice. Donald Ayer, who served as Deputy Attorney General under President George HW. Bush, along with other former Justice Department officials, was astonished and perplexed by the decision to break with longstanding practices followed by officials of both parties during past elections. Ayer’s letter noted, Perhaps most troubling is the precedent set by this departure from the Department’s widely-respected, non-partisan traditions. We should reject the departure and return to the traditions. Although the President has the power to remove an FBI director, the decision should not be taken I agree with the nearly unanimous opinions of former Department officials. The way the Director handled the conclusion of the email investigation was wrong. As a result, the FBI is unlikely to regain public and congressional trust until it has a Director who understands the gravity of the mistakes and pledges never to repeat them. Having refused to admit his errors, the Director cannot be expected to implement the necessary corrective actions.

Please note the array of Democrat and Republican AGs who supported this decision, a fact that CNN, MSDNC and other liberal media are failing to report and are instead equating this with Nixon’s “Saturday Night Massacre” in 1973, when he had the Attorney General and Watergate Special Prosecutor fired because they were getting too onerous to Nixon on the Watergate investigation.

You would think the media – even Fox News – would at least show some details of this memo on air. Perhaps they are not because they prefer to do the horserace ‘he said she said” approach to journalism and make everything into a partisan debate. So, therefore, knee-jerk tweets from John McCain or statements from Democratic Senate Leader Chuck Schumer get played over and over, but nobody bothers to interview any of the ex-A.G.s in the Rosenstein memo to get them to verify what they said.

In a future column, I will cite some examples of how the media (print media) are suppressing or deliberately not publishing certain facts in order to tout a liberal or anti-Trump narrative, which I believe has disastrous consequences for our democracy. A free press is critical to the survival of democratic (small d) governance in this nation. If the public is being deliberately misinformed by their local and national media and thus formulate opinions and attitudes that are grounded in bad information, we all suffer.

It is my hope that by presenting this detailed memo readers of this blog will post these FACTS on their Facebook pages or other blogs and show that this decision , while suspect to many on the Left and unfortunately, some of our own Republicans, was grounded in fact and it is necessary now for the president to choose a new FBI Director who is above politics so these various side-show investigations on Russia hacking or Hillary’s emails and the Clinton Foundation can proceed in a nonpartisan way.