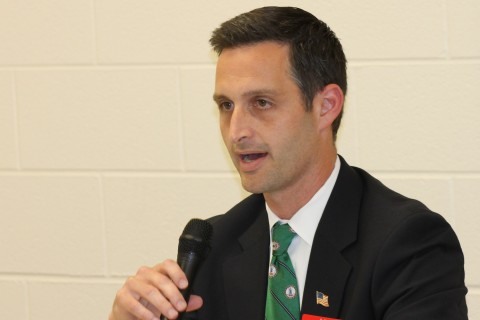 After Tuesday’s debacle there have been some calls for Republican party chair, John Whitbeck, to step down.  The Chairman explains why that will not be happening:

JW. You have a duty. Do it. Fire yourself NOW.

It’s not just him, it’s the entire worthless RPV board of directors, itake a look at the makeup; their day jobs, when they meet, where they meet, etc.

A weak, ineffectual, numerous board that infrequently meets to do nothing but polarize between power plays of a rigged convention over a rigged primary, related and other pointless sh*t.

Clear the board of a) token affinity seats, b) board-packing seats, and c) over-represented district seats that do NOT vote Republican.

And you wonder why we have so many undocumented Republican organizations screwing with our party processes?

Because our organization systemically sucks.

He comes across as very smug IMHO. Mentioned that he discussed minority outreach in 2012 – well what the hell has he done about that since 2012?

Myself my wife and my daughter all joined the Republican Party officially last year and became local delegate not in our County not in our state level. We kept seeing local events except it was the day of by people attending those events I called my district leader and after a week he finally called me back had no excuses just that he was too busy to even call me back. aslo I called the state RPV and the guy said their responsibility was to get Republicans elected I asked him how they expected if they weren’t even contacting members and trying to gain new ones. Then you have Shenandoah County that voted 321 to elect Ed Gillespie yet overwhelmingly voted out to conservatives and voted against a third conservative of their own party

Jay would you have voted for Denver? myself my wife and my daughter all joined the Republican party last year during that year we have had zero contact from anyone within the party that is why they failed

Our open primaries favor establishment control of the nominees.

And we’re surprised when we are rejected by the electorate?

If you don’t vote Republican, he shouldn’t matter to you.

The Republican Party has chosen to be part of the problem. There are two acceptable ways of fixing, repair or replace.

Repair is expensive, long, painful, and in many cases requiring a full gutting. The black mold in the GOP grow-house will take extra measures.

I want the Chairman to take responsibility for the defeat. It is his state, his candidates, his battle, his generals, his strategy & tactics, his staff, his units — his loss.

And I want the board of directors, especially the ones that voted for primary and favored Ed for the nomination to take responsibility for Chairman Whitbeck and the election.

At all levels, I want our Republican leadership to do the honorable and the right things.

Do I expect them to do so? Will I allow them to continue to drive our party, commonwealth, and country into the ground? No, some folks only learn by the stick (apparently not the vote.)

The “Republicans” on this blog aiding and abetting the enemy will be opposed and replaced. The Republican resistance is strong and growing. President Trump and Corey Stewart show us the way.

Chairman Whitbeck’s leadership, competency, and performance — while suitable for the ‘New Whig’ party — is unacceptable for Republicans, and apparently the voters of Virginia.

The GOP got spanked as the local units have forgotten that truth “that all politics are local” ! By failing over the years to contest local elective offices giving the Liberals/Dems/leftist (and fellow travelers) a walkover selection process so at the local level the Narrative is controlled by folks antithetical to conservative thought. NO MORE WALKOVERS contest every local race…

He has to go! Our women’s group has been upset with him for years! I have talked with him about our losses and Voter Fraud, sent emails but never received a response.
We are getting tired of working so hard; only to lose because the RNC and our state leaders are Establishment!!!

Well, they kinda have to be GOP establishment, because they are, by definition.

The party and candidates were out of touch with the electorate, going both ways.

Did he say ‘Sorry’ or take responsibility?

Translation: “It’s not my fault in any way because… reasons. Plus, shut up.”

We don’t need to pick apart the lame excuse video, just gong it.

Mr. Whitbeck,
With all do respect the
MS-13/Santurary Cities and The Lynchburg Steel adds were not exactly
true.

The Chairman is responsible for not bringing the issues up properly to the Nominee, bottom line! He is a fund raiser nothing more.

How come the MS-13 “Gang” add did not articulate to voters that your Federally provided Gang Task Force revenue was expired and the cost not the responsibility of localities is very hard to meet without local tax increases?

Instead of attacking immigrants,
why was it not articulated to voters the policy of open borders from our last *two* Presidents has created a unapproved permanent guest worker program that has continued the flow of *individuals* some with good intentions and some *not* with the willingness to take advantage of the kindness of Virginian’s and inflict crime in our communities?

Santurary Cities??? Please in lighten me on a cases wher Cities in Va were turning immigrant criminals back on the street. I do know that under Obama if illegals without drivers licenses were caught in traffic checkpoints they would call ICE, they would not come get them.
Was this just more of a ploy to defund the evergrowing Democrat population in Cities?

Let’s move on to the China muffler manufacturing debacle in Appomattox it was a loss of said 1.9 Million to Virginia *but* he failed to address the annual loss still intact today of estimated $25 million? Combined with our employment of the immigrants through illegal construction trades, for which Va already expenses revenue for trades education? That cost Va.
jobs , revenue and evergrowing insurance premiums?
How come all of this *fraud* was not articulated to the voter?
Could it be that he the nominee was a fraud himself?

The Lynchburg Steel add. To blame McAuliffe for a woman owned designated bussiness is completely wrong. It is a family owned business that has not been able to complete in a profitable manner due to the fine way they treat the employee as opposed to the flood of steel imported from China and Japan?

Yes, he could have had adds address fraud, the expense of curbing organized crime and embraced a little bit of Va. First
not China first.

But Chair Whitbeck chose *just*
to be a fundraiser.

I picked up my local paper (the news and advance)yesterday. I felt ok by what I read. I look forward to possibly doubling my crew of 4 to the level it was on Sept. 11th 2001.

And those who disagree;
1)Please tell me how a $700.00 tax break was going to get me felling comfortable in hiring 4 more people by summer?
2) Please articulate to me in a factual manner as I have above;
What DPOR Regulations would the nominee cut from my bussiness (building homes) to have caused me to hire more employees?
3) How would he have collected when he did not address payroll,
insurance and tax fraud? Unlicensed Contracting and JLARC427?

If the Chair is not going to step down he damn sure must do some hiring of people who are actually in touch with the issues.

I will let you guys fight out the Medicaid Expansion for that appears to be your only game.

I call on our Republican Senators to please do what is *right*, tell your chair he is to be more than a fund raiser, and please work with the current and incoming Administrations to rid Va of the fraud I have discussed and Imported Steel.

My apologies to my President,
I could not cover this in a tweet.

The problem is that the RPV has utterly failed to modernize and match the 2008 Obama database / field operations / GOTV machine. We’ve had 8 years of warning and John Whitbeck and the entire RPV has just been sleeping instead of getting up to speed.

Trump didn’t win the state in 2016, did Ed think that he would be embraced by Team Hillary?

The #never was strong with Team Ed and he thought he could ‘go it alone.’

I got outright hostility from my Trump calls and enthusiastic support from my Corey calls.

Bottom Line: We picked the wrong ticket and didn’t make the sale.

You can’t seriously believe that Corey would had failed better. Ed threw his own sense of right and wrong out the window, and tried to take up the issues that Corey and the rest of the racist Neo-confederate faction of the party wanted to focus on, and it cost him the independents and moderate by wide margins.

The only chance the party has in succeeding in Virginia is to divest itself of the VFC, Corey, and the ultra-right folks like Bob Marshall. They are toxic to all but the most extreme elements of our society and state. As long as they are embraced by the Republican party, independents, moderates, and the rest of modern, educated society will never vote republican.

We selected the wrong nominee and he lost. Corey, Denver, or even Frank might not have lost. So any of them could have done better (or not)

Our nominee failed to win and our party failed to facilitate his election. We can learn and choose a better nominee next time, and we need to replace the leadership that could not politic Team Ed into the win.

This was a bad election, of course, for Bob Marshall. And as Nixon might have said, you don’t have Bob Marshall to king around any more. But for years & years Bob won in a majority democRAT district. The pervert that defeat Marshall had a lot of “outside money” that wasn’t answered by the GOP establishment. The polls seem to say that a majority of Virginians want to keep the “Confederate Monuments. Had the GOP run on that as a single issue, they might well pulled off a victory.

The RPV constantly invests in data technology that never works right. Enough with the big data systems approach where volunteer effort and voter data is sucked upwards towards the dream of an RPV skynet. I’m tired of being the door-to-door data b*tch for centralized systems owned by these brothers or that turncoat leftist.

Buy a database site license for the units, give each unit a turnkey database from a developer that works only for the RPV and give the units the authority and responsibility to run their own data.

We were caught by surprise, we didn’t see this coming, we should have , HE should have— I hope Chairman Whitbeck has more than this ‘it’s a Dodge’ surprise commercial excuse.