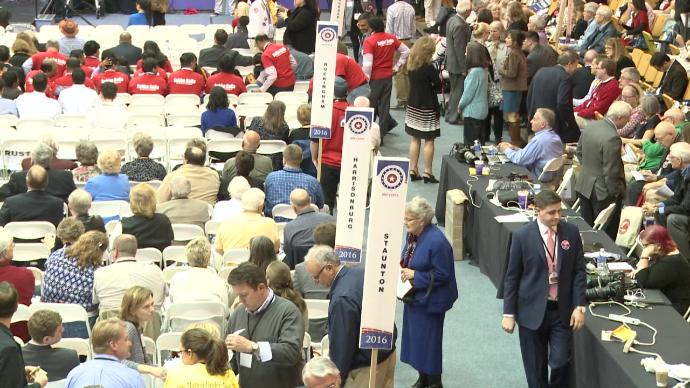 Last winter and spring, with the seeming possibility of a contested Republican National Convention for the first time in at least 40 years, state Republican parties all over the country experienced difficult and often controversial processes for electing RNC delegates.

While the RNC has not yet moved to provide guidance or leadership to the states on ways to avoid similar controversies in the future, several state parties that experienced problems last year are currently working toward remedies. Among those is the Republican Party of Virginia, where for at least the past 44 years a committee of appointed party insiders has been responsible every presidential election year for hand picking a slate of at-large delegates to be rubber-stamped by the quadrennial state party convention. We wrote about the need to end this establishment-inspired practice last summer (“End the Slate” and “End the Slate – Part Two“).

The RPV State Central Committee is a volunteer organization that only meets four times a year, most years. It takes a while to get things done. At a meeting last summer, 8th District Representative Sandy Liddy Bourne got the ball rolling on this issue. Her motion was laid aside for further study by the organization’s Party Plan Committee. That Committee, chaired by 10th District Representative Eve-Marie Gleason, has now released its report outlining two options studied by the Committee, offering no recommendation one way or the other. The report is embedded below.

An amendment to the party’s Plan of Organization (i.e., its bylaws) requires a 3/4 supermajority. Right now, it is not clear that such a supermajority exists for either option. The most common concern we have heard expressed is about the unwieldy nature of having potentially dozens (maybe hundreds) of names on a single ballot to be voted on from the floor of the state convention. Others have expressed concerns that an amendment to the Plan would tie the hands of future State Central Committees in how they could draft their convention calls and draft rules. One potential alternative approach we’ve heard suggested is passage of a resolution against the slating of delegates like has been done traditionally.

What seems most like to emerge from tomorrow, however, is a decision to wait and handle the issue at a subsequent meeting. Unit chairmen, grassroots activists, and even members of the State Central Committee have not yet had a meaningful opportunity to study these options (which, incidentally, should have been included with the Call if they are to be adopted as party plan amendments). So, we’ll probably take a little bit more time and get a significantly greater amount of feedback and buy-in from the grassroots.

Although it may or may not be the case that a consensus emerges around one of these approaches tomorrow or in the coming days, here’s the good news: nearly everyone on the State Central Committee agrees that the method used for at least the past 44 years is no longer tenable. All that’s left is to figure out what replaces it.

We’ll be on hand at the meeting tomorrow in Richmond to report live on the debate as it unfolds. As we like to say, stay tuned.

Ranked and proportional voting systems can fairly and efficiently solve a healthy portion of the problems plaguing the RPV (and countless other organizations) on this particular front.

Maybe I missed something reading through my glaucoma vision haziness. So where do the local party people get involved in these proposed delegate selection plans? Can someone give an example how these two options would work in real life…without the legalese?

The local unit has a mass meeting where anyone who shies up and signs a paper can vote for party officers.

Then we have a district mass meeting where anyone who signs papers in advance and shows up at the district “convention” can vote to elect 3 delegates and 3 alternates to the national convention. (They also elect 3 republicans to the RPV board of directors AKA SCC )

Then we have another statewide “convention” nÃ©e mass meeting where anyone who signs papers in advance and shows up gets to vote. Here we vote on the at-large delegates and alternates that are usually brokered out by RPV and star chamber nominations committee. Traditionally these are the party luminaries, financial supporters, operators, and primary winners leadership and honorees. (They also elect the sexist National Committee man and woman, one from Virginia and one from Texas.)

By focusing on the mechanics of slating and politicization of how Team Cruz wanted to maximize the votes from the at-large delegates, the SCC will address the symptom and ignore the systemic disease that is killing the RPV.

Oh. So nothing has changed. Got it. Thanks.

I was one of the hundreds of pro-Trump delegates who left there from Harrisonburg that Sat night, hoarse from screaming at Cuccinelli and sore legs from stomping in the bleachers.

Some party members admit the horrible damage done tbat day to the GOP in VA.

But for others – it’s time to kick the can down the road.

Despite nefarious machinery on the RPV’s part, thankfully Trump won. By all means, SCC – kick, delay, and convolute this issue for the globalist money bags calling the shots.

Maybe the SCC will do something about the Republicans that are not supporting the President?

Nah, too unpleasant. I wonder what wisdom the UN of the RPV will give us tomorrow.

You should never scream at Cuccinelli, and the only reason that your legs should be sore would be if . . . .

Then the Draft Ken Cuccinelli for U.S. Senate page isn’t for you, Connie.. https://www.facebook.com/KenCuccinelliForSenate/

Trump did not have enough supporters at the Harrisonburg convention. If you want to win a convention, you have to get your supporters to show up.

Our supporters had to work.

We did not consider our party would work to thwart the will of the electorate. We fricked up, we trusted them.

The will of the electorate was that the Delegates from Virginia would be bound to Trump on the first ballot. That was not thwarted.

That was entirely no thanks to our state party, nor our mass meeting elected delegates, they tried but failed.

I’m so proud of our convention delegates, especially the Kerryesque tossing of the credentials and the antics of the Virginia delegation.

But that’s old news, why can’t we just move on?

Virginia has new elections every year. We have no choice but to move on!

It wasn’t a convention, it was a statewide mass meeting.

So it’s a mass meeting with prefiling. Still not a convention.

Etched in the memory of Virginia Trump Delegates forever: The Harrisonburg Heist!

After that day’s foulness, I no longer call myself a “Conservative” .. because I have ethics and don’t believe the end justifies the means.

You are so right! I’m a Trumpist.

I’m not about to yield “conservative” to tyrants.

Don’t visit the Draft Ken Cuccinelli for U.S. Senate page John. It’s not for you. https://www.facebook.com/KenCuccinelliForSenate/

It’s not a heist when you get the most votes, and it was an accurate count. If you’ll recall, we actually did a roll call vote in Harrisonburg to count the votes for the slate. It’s too bad the Trumpists wouldn’t let the same thing happen in Cleveland concerning the rules.