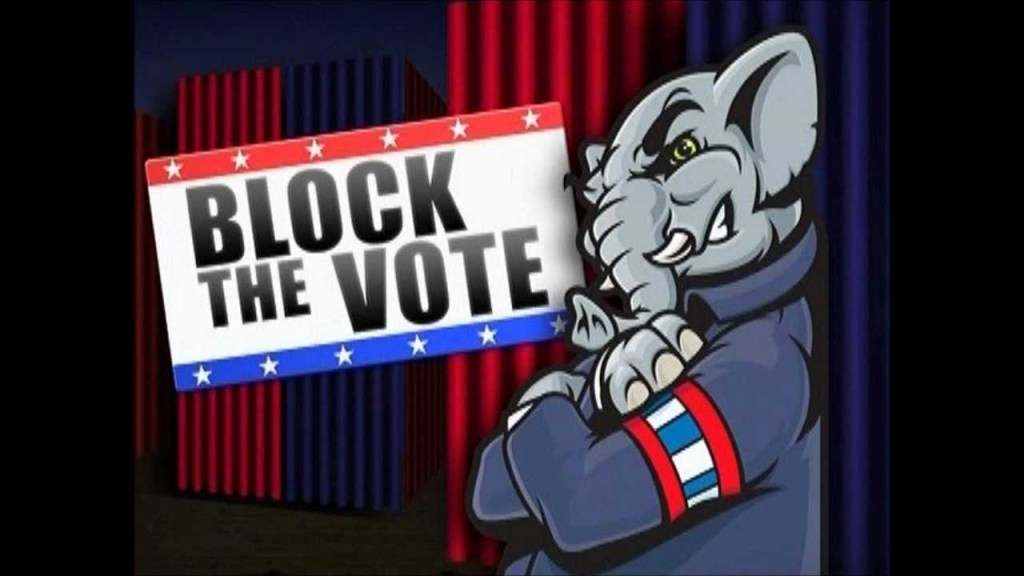 Talk about turning a big tent into a teepee!

Well, there they go again.

The Republican Party of Virginia (RPV) is once again concocting exclusionary pledge schemes to snatch defeat from the jaws of victory.

After losing seven consecutive statewide races in Virginia, you would think the brain trust at RPV would have figured out by now that they need to grow the Party, not dream up Neanderthal parliamentary stunts to further restrict grass roots participation.

The newest RPV scheme to limit participation in their nominating process is a ploy requiring signed pledges from unsuspecting voters at the voting table before they can vote in the GOP primary on Super Tuesday, March 1.

The State Board of Elections sanctioned it, at RPV’s request.

According to RPV, taking advantage of this arcane loophole in state election law somehow legitimizes their ruse.

We see right through it. It’s voter suppression, pure and simple.

If someone shows up to vote on Super Tuesday and asks for a Republican primary ballot, the State Board of Elections representative or poll worker is required by the SBE ruling to tell the voter they have to sign what the RPV calls a “Statement of Affiliation” prior to being issued a ballot.

If it walks like a duck and quacks like a duck: its a duck – or in this case, a pledge. Calling it a fancy name is intellectually disingenuous and insults the intelligence of Virginia voters.

The “Statement of Affiliation” requires any voter who requests a Republican ballot to sign their name to a document stating their allegiance to the Republican Party of Virginia.  Prospective voters are also asked to provide intrusive personal information such as cell phone numbers and email addresses.

Many Independent voters are just that…independent.  Forcing them to pledge party allegiances is counterproductive to the bigger mission, which is to inspire them to vote Republican in the general election.

What if the voter is new, an Independent, a conservative Democrat or just is not comfortable signing this invasive document at the voting table?

What if the voter is unaffiliated or has not voted in awhile because they are disgusted with the system?

If the person refuses to sign the pledge, what does the election official or poll worker do?

Do they refuse to give the GOP ballot to the voter and tell them to go home?

Do they tell them to just go pound sand?

Or maybe offer up the Democratic ballot as an alternative –that requires no pledge or signed affidavits?

This is a public relations nightmare at best, or blatant voter suppression at worst.

If the potential GOP primary voter is given the ballot anyway, after refusing to sign their manufactured pledge, then what is the point of the whole exercise?

So what do you think is going to happen if one precinct issues a ballot to someone refusing to sign the pledge and another doesn’t?  This spectacle opens up a legal Pandora’s Box nightmare.

Unless of course, it’s meant to discourage Independent, unaffiliated or new voters from showing up at the polls in the first place – and these just happen to represent a significant portion of the Trump for President voter base.

One RPV official told me the real objective is to “gather future voter mining data.”

The State Board of Elections is under no obligation to give the pledges back to the RPV.

Other RPV party bosses claim it’s a substitute for Virginia’s open primary system where voters do not have to register by party affiliation.

But that is up to the General Assembly to change — not the Republican Party of Virginia’s ruling class.

The General Assembly can’t even get that one out of committee. So the RPV attempts to back door it, ignoring the will of our elected representatives in Richmond.

What a great way to encourage Independents to vote in the upcoming Republican Presidential primary, right?

Perhaps they would just rather lose statewide for the eighth straight time in a row.

Make no mistake: this pledge gimmick is designed to punish one candidate who is bringing in the very new voters the RPV desperately needs to win a statewide election: Donald J. Trump.

What is the RPV afraid of?

Virginia Republicans have until January 15 to convince the state central RPV committee to abandon this absurd “Statement of Affiliation” and stop harassing unsuspecting voters who want to exercise their right to vote in the primary they choose.

Failure to do so sends a clear signal of intimidation…and exclusion.