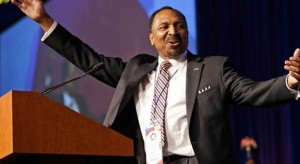 It’s no secret that E.W. Jackson is a Christian pastor. Further discrediting the leftist smear campaign against Jackson, the Richmond Times-Dispatch wants you to believe that means he’s an anti-Semite.

Apparently Jackson gave a guest sermon at Restoration Fellowship Church in Strasburg on Sunday, and–SHOCKINGLY–described Christianity as the one true religion. Obviously this is hateful, right? Right.

Well, the RTD apparently thinks so, and decided to call on an Obama-affiliated leftist Rabbi to get his thoughts. And–AGAIN SHOCKINGLY–this provides an opportunity to attack Jackson as having somehow “denigrated Judaism.”

But the RTD doesn’t stop there. In classic non sequitur fashion they take the opportunity to drag in just about every out-of-context smear against Jackson as evidence that their suspicions of hatred and bigotry simply must be right.

And to make the perfect storm, they cite John Whitbeck’s ill-advised old Catholic “a rabbi and the pope” joke last week for the apparent proposition that now two-thirds of the GOP ticket is hostile to Jews, and that the other third, Mark Obenshain, needs to denounce his ticket mates.

“For the second time in a week a member of the Cuccinelli team has publicly denigrated Judaism, this time explicitly including others who are ‘not like us,’ “ said Moline, who has longstanding ties to Democrats and helped organize a group called Rabbis for Obama.

“Mr. Cuccinelli distanced himself from the anti-Semitic joke used to entertain a crowd of his supporters. Now it is time for him and Mark Obenshain to declare clearly whether E.W. Jackson represents the values we could expect from the government they propose to lead.”

This is really disgusting, on many levels. It is as bad and blatant a hit piece as any I’ve seen from a purportedly reputable newspaper, and reads as if it is a press release from the Democratic Party of Virginia. Instead of just reporting the facts, the reporter makes a number of leaps of opinion to help readers connect dots that only exist in the fevered imaginations of anti-Christian bigots and the leftist elite (am I being redundant?).

Worse, it paints a picture so far out of phase with reality that it beggars belief that any editor allowed it to be published. I’m sure if they cared to test the allegations of anti-Semitism, they could do some research, or ask the candidate what he thinks about Jews. They might have found something like this full-throated criticism of anti-Semitism within the black community, or countless citations to “Judeo-Christian” traditions peppered throughout Jackson’s sermons and stump speeches alike.

But why let truth and objectivity get in the way of the desired narrative? That would be too much like real journalism.