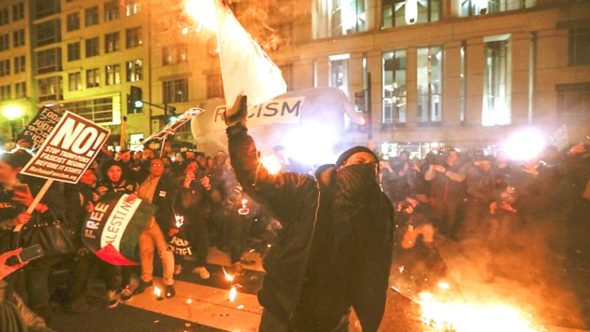 Rule of Party of One

It is upsetting to find out that a principal asked a high school student to remove his baseball jersey at a game where everyone was encouraged to wear patriotic t-shirts.  His white jersey sported the American flag, the name Trump, and number 45. The student had to remove the shirt deemed as making questionable political statements and incite violence. It is hard to understand how our president’s name and number would incite violence. One may not agree with his policies but he is our president, governing over the best economy in decades.

But our country now is negatively transformed and divided by one party, the Democrats, who are busy inciting mob violence among their followers and even paying them to create violent mob situations in the public arena, wearing dark clothing and masks like the cowards that they are, harassing innocent Americans in restaurants, shooting Congressmen on a softball field, banging on the doors of the Supreme Court, blocking traffic in Portland while one policeman is watching, interrupting Senate hearings with chants of hatred, shoving elderly people and hurting peaceful protesters, carrying bats and injuring anyone who dares to wear a hat or t-shirt supporting our president or attending his rallies.

Democrats are masters at demonizing the opposition, accusing them of hate crimes, and calling them Nazis, bigots, xenophobes, islamophobes, racists, and many other descriptors of sheer hatred and intolerance. They are following in the footsteps of Soviet communists and Nikita Khrushchev’s “conquest without war” to fundamentally transform life around the globe.

Nothing could stand in the communists’ way. When Ukrainians refused to collectivize their agriculture, to give up their land and private property for the “greater good,” peasants were attacked with demeaning and dehumanizing words craftily chosen, “kulaks” and “enemies of the people.”

In the insane world of Bolshevism and communism, it was patriotic to kill the opposition. Stalin even “decreed the liquidation of the kulaks as a class.” During a very dark period of history, 1929-1933, the number of deaths rose to 10 million, with another 10 million placed in slave-labor camps in Siberia, Central Asia, and the Far North. (Conquest without War, Pocket Books Inc., 1961)

When Stalin tried to go further, asking permission to execute members of opposition groups within the Communist Party, the Politburo and the Central Committee refused. But it was only a temporary reprieve as the bloodbath escalated.

After Sergei M. Kirov, a Politburo member, was killed by a young Party member, the annihilation of “class enemies” exploded. It is important to note that young party members were always the “useful idiots,” short on real knowledge, and long on ginned up ideological hatred and class animosity rhetoric.

Historians agree that Kirov’s murder was the signal to escalate the repression. Show trials wiped out all the Bolsheviks who led the Revolution, all the surviving members of Lenin’s Politburo. Communists ate their own useful idiots. They had dared to raise their voices against the carefully crafted cult of personality of Comrade Stalin and thus against the “teachings of Marx, Engels, and Lenin.”

Made-up, unfounded, and unproven accusations sent millions of useful idiot Russian communists and non-communists in front of the firing squad. It was a horrible way to get rid of the opposition.

It is for this reason that the recent Kavanaugh Supreme Court hearings in the American Senate were hard to watch and daunting as the “show trial,” complete with screaming paid communist Democrats in the gallery, was based on allegations from 36 years ago, and not corroborated by any credible evidence or believable witnesses.

It was eerily reminiscent of a Soviet-style “show trial.” Instead of the person being executed after the Soviet “show trial” where the outcome was already predetermined, in the American “show trial” called hearings, the accused’s entire life and professional life were assassinated in a legal system in which the accused is supposed to be innocent until proven guilty, not guilty until proven innocent.

Even though the Senate is not an actual court, the guilty “accused,” who had to prove his innocence, was already sentenced in the blaring court of public opinion.  The precedent has been set. If you ever find yourself in a real court and in a similar situation, who is going to come to your defense when you are already deemed guilty in the court of public opinion?

If you don’t have freedom of speech and assembly, and are afraid for your life in a public place, are you really free, or are you living under the rule of the party of one and their paid violent mobs?

Rule of Party of One was last modified: October 13th, 2018 by Guest Contributor Dr. Ileana Johnson