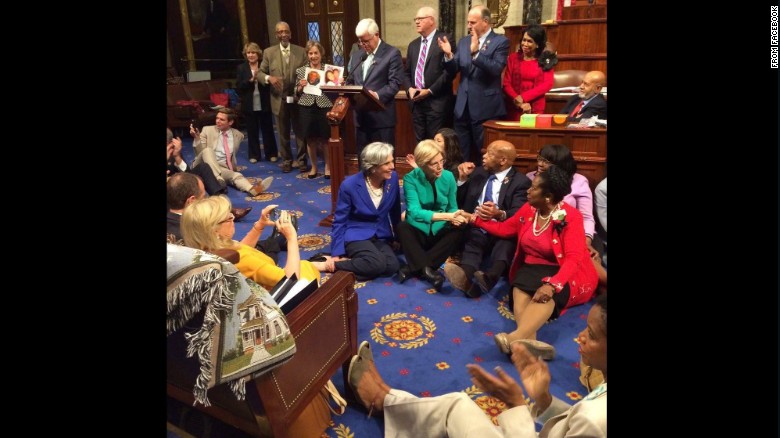 Rumble in the House

The menagerie of House Democrats – they could be extras for the bar scene in a Star Wars movie – were only slightly more preposterous in their adolescent â€œsit-inâ€ on the House floor this past week, than their Republican counterparts were in their feebleness for not having the Capitol Police drag them out of the Peopleâ€™s House.

The carnival-like fracas in the House chamber was the radical lefts version of intellectual one-upmanship on the sham â€œgun controlâ€ bills that had already failed to pass in the Senate just days before.

The four bills in question were simply â€œfeel goodâ€ publicity stunts because not one of these bills â€“ not one – would have stopped any recent shooting spree by crazed, maniacal, mass killing Islamist radicals; even though the murder of 49 people in an Orlando nightclub by a self-proclaimed radical Muslim terrorist was the pretext that inspired the need for more â€œnewâ€ gun control measures.

This is the kind of irrationality that passes for reasoned debate in the modern Congress; and once again, Republicans, instead of mounting a unified, all-out attack against this insanity, yielded the battlefield without a fight by engaging on the phony gun issue in the first place.

The line of attack by Congressional Republicans was obvious; why are Democrats ignoring and accommodating the real threat to Americans – radical Islamist murderers in our midst? Why are the Democrats silent on the slaughter of gays by a Muslim terrorist?

Weâ€™ve been to this rodeo before. Radical Jihadist killers (is there any other kind?) purchased or procured weapons legally, largely because they live among us in relative anonymity, barricaded behind a wall of political correctness and the force of official tolerance. And they live in an American culture that no longer demands assimilation with its unique responsibilities, but encourages hostile cultural enclaves around the country.

From San Antonio, Boston, San Bernardino to Orlando, these Islamists murderers were all on the radar of the FBI at one time or another. But, in the end, that didnâ€™t matter anymore than gun control laws matter to criminals.

The confusion about the place of identity in the American culture has now reached a dangerous mass, and the willful ignorance of the American media and the political class (and the progressive churches) over the widespread approval and acceptance of Sharia law in the Muslim community is a sobering reminder that we have not seen the last of these events, but merely the beginning of them.

Sharia law itself is the problem because it demands action from its adherents; it commands the killing of homosexuals, the devaluation of women, and the requirement to subjugate or kill non-Muslims. It is antithetical to everything the American experiment represents; it is in an ageless and self-proclaimed war against the Christianity and Judaism and will never be compatible in co-existence.

The more this issue is ignored, the more â€œintolerantâ€ the final reaction to it will be. Serious Muslims who reject Sharia and have come to the U.S. to get away from the darkness it embraces, or the succeeding generation of American born Muslims, have to be in the front lines of this battle by joining the American culture and actively and publically defending it and identifying the radical mosques and individuals, if there is to be any hope of breaking the grip of radicals on Islam, at least in the U.S. And the government must abandon its reluctance to address Islamist radicalism head-on, by telling the truth and ending unvetted immigration.

While the Speaker of the House, Rep. Paul Ryan (R-WI) maintains that even temporarily stopping refugees and immigration from Islamic countries is â€œnot an American value,â€ many other Americans are asking whether the killing of innocent Americans for a dark ideology is an American value.

This is the unique brand of juvenile moralizing that is rampant in the American ruling class, the administration and the Congress. The rationale behind this thinking is no longer important; but changing it will require average Americans to track down the voting records of their Congressmen and Senators; where do they stand? Did they support the massive increase in funding in the last Omnibus bill that provided for an additional 300,000 refugees, few of whom can or will be adequately vetted?

Is your representative part of the problem?

Rumble in the House was last modified: June 25th, 2016 by Michael Giere

Michael, I always appreciate the truth you share with us, but this post is truly exceptional. Our media and politicians continue to not only ignore, but to willfully obfuscate the agenda and threat posed by radical Islam and civilization jihad among us.