Running With The Bulls In Virginia 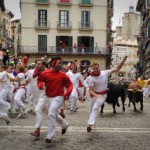 Everyone is familiar with the old tradition of the Running of the Bulls in Pamplona, Spain and elsewhere.  Originally started alongside bulls that were being led from their corral to the small town’s bull fighting arena (where the bulls would meet an untimely demise), this tradition has developed a worldwide mystique thanks in part to Ernest Hemingway’s romantic depiction of it in The Sun Also Rises.

Now that old tradition has come to Virginia!  A group in Dinwiddie has scheduled the Great Bull Run for tomorrow (Saturday, August 24) at the Virginia Motorsports Park in North Dinwiddie.  Putting a Virginia twist on things, the running the bulls will be followed by the “Tomato Royale,” a gigantic food fight with tomatoes.

Running With The Bulls In Virginia was last modified: August 23rd, 2013 by Chad Ochocinco