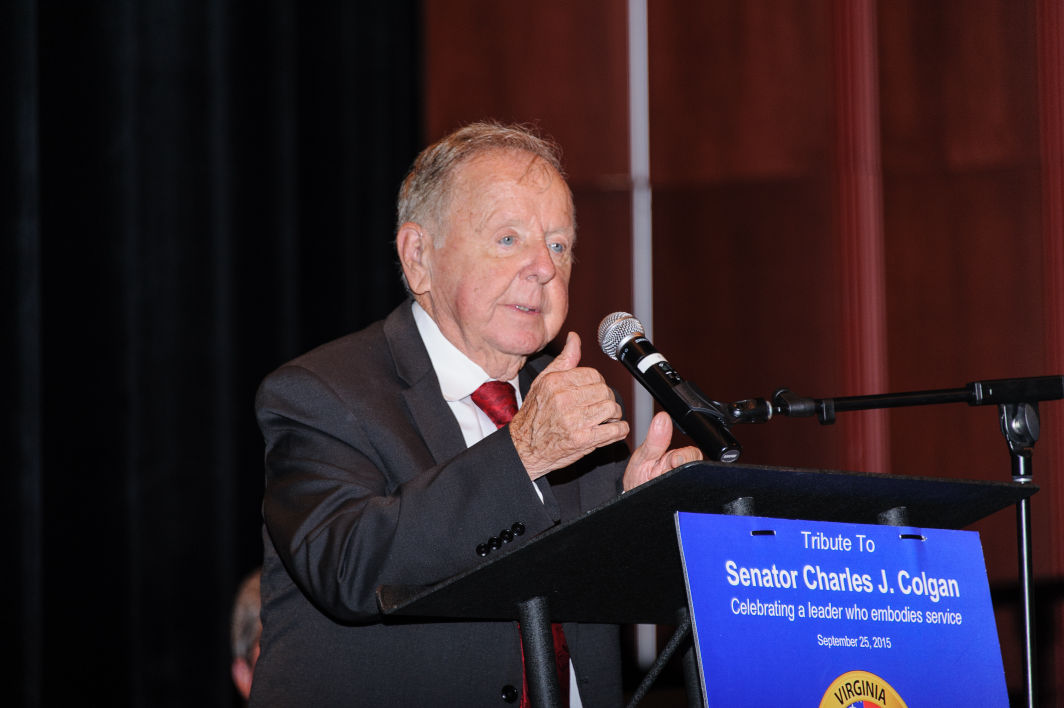 “Today he soars with the angels, he lived the American dream – 1926-2017. It is with heavy hearts that we share our beloved father and Poppy has passed away after a brief illness. Many thanks for your prayers and support. Special thanks to the Adler Care Center for their amazing care.

Originally from western Maryland, Colgan was first elected to the Virginia State Senate in 1976. He served until last year when he announced his retirement. He was succeeded in the Senate by Jeremy McPike, who told us he visited Colgan’s family over the weekend.

Prince William County’s newest high school near Manassas is .named after Colgan, and so is a hall and a theater at the Manassas Campus of Northern Virginia Community College.

George Mason University honored the long-serving Senator this past fall with a statue at its Science and Technology Campus near Manassas.

Charles J. “Chuck” Colgan retired in January 2016 as the longest-serving State Senator in Virginia history. Senator Colgan, whose home district includes Prince William County, Manassas, and Manassas Park, championed higher education around the Commonwealth for decades because he recognized that strong state universities make for a strong state and that world-class universities attract talent, which leads to innovation and growth.

Orphaned at age 5, Colgan grew up on his grandparents’ farm in Western Maryland. Following high school, he enlisted in the U.S. Army Air Corps Reserve as an aviation cadet. He was called into active duty during World War II, serving two years in the Army Air Corps and three years in the Air Force Reserves.

Dreaming of a career in aviation, he became a commercial pilot and licensed airframe and power plant mechanic. In September of 1964, his aviation career brought him and his wife Agnes to Prince William County, and in 1965 he formed Colgan Airways, Inc., which grew to operate one of the 10 largest flight schools in the country. Presidential Airlines acquired Colgan Airways, Inc., in 1985. Wanting to stay in the aviation business, he and his family established Colgan Air, Inc., in 1990. The airline served 53 cities in 16 states and had nearly 1,300 employees. Colgan and his family received the Turboprop Airline Executive of the Year Award before selling the enterprise in 2007.

Closely paralleling his aviation career was Colgan’s active community involvement and public service. Colgan entered elected office in 1971, when he was elected as the Gainesville District member of the Prince William Board of County Supervisors, serving one year as Chairman. At the urging of local business leaders, Colgan ran for and was elected to the Virginia State Senate in 1975. During his 10 consecutive terms in the Virginia Senate, Colgan introduced 560 bills and 120 joint resolutions, secured funding for the 234 bypass, the Prince William Campus of George Mason University, the Forensic Science Labotory, and buildings at the Woodbridge and Manassas Campuses of the Northern Virginia Community College and many more.

During his career, Colgan was named the “Most Influential Citizen in Prince William County” byPotomac News and “Man of the Year” by the Manassas Journal Messenger. The Virginia Transit Association named him Virginia Senator of the Year for his work on local transportation. He has been inducted into the Virginia Aviation Hall of Fame and the recipient of the Fox 5 Hometown Hero Award and Leadership Prince William’s Leadership Vision Award. In 2016, a high school in Prince William County was named in his honor. He was honored with a wonderful retirement party organized by a group of business and community leaders at the Hylton Performing Arts Center in September 2015. It was attended by more than 800.

In September on his 90th birthday, a bronze statue was dedicated to him in dedication of his commitment, leadership and extraordinary service to Prince William County, the cities of Manassas and Manassas Park, and the Commonwealth of Virginia. The statue sits in front of Colgan Hall that was recently renamed for him at George Mason University.

A true statesman, Senator Colgan achieved results based on principles and bi-partisan leadership.

He is preceded in death by his loving wife of 52 years, Agnes L. (Footen) Colgan, his parents, Ruth and Raymond Colgan, brother William Colgan and sister Catherine Bellows.

Visitation and funeral mass will be held at All Saints Catholic Church in Manassas, where Senator Colgan served as an usher for 50 years. Arrangements by Pierce Funeral Home in Manassas.

Rest In Peace Senator Colgan. Thank you for your service.

Sad. I knew him from living in PWC between overseas assignments.

From the old school back when politicians worked together.