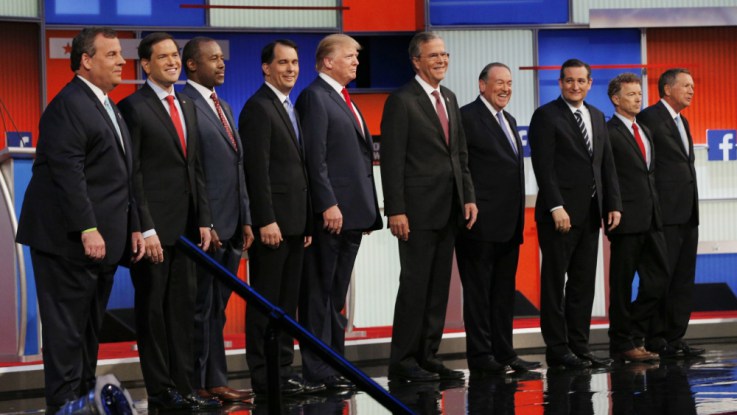 Sage Advice for the RNC and RPV

The Republican Party of Virginia will back the Republican Nominee, be it Donald Trump, Ted Cruz, Rand Paul, John Kasich, Marco Rubio, or Jeb Bush.

Each candidate promises a collection of problems unique to their own brand and faction, but none of these candidates, should they win, should be subjected to sabotage by The Republican Party itself. Nor will they. However, that does not mean that the Republican Party isnâ€™t susceptible to getting in their own way once they have their nominee.

And we wonâ€™t. And it doesnâ€™t even matter. Stop worrying about Party Unity and worry about electing your nominee.

Hillary Clinton, Bernie Sanders, and Martin Oâ€™Malley are the three most ideologically liberal candidates the Democrat Party could find. It doesnâ€™t matter which one wins, because they are all losers. Regardless who the Republican Nominee is, the Republican Party has the opportunity to reach out to Independents and Democrats who have not yet made peace with the inevitability of socialism in America. None of these candidates possess the novelty of Barack Obama. They possess hardly any novelty at all. Sanders is a socialist. Clinton is a woman. Martin Oâ€™Malley plays a mean guitar. They are all the same candidate and none of them will inspire independents or blue-dog Democrats.

If Hillary Clinton wins, we need to tell story after story about how Hillary Clinton protected her philandering husband from the accusations of his female victims. If Bernie Sanders wins, we need to talk about how Socialism will destroy the Democrat Party and how excited we all are that they finally went public with their Marxist Utopian plans. Does Bernie have a â€œFive Year Planâ€? We should ask that. If Martin Oâ€™Malley wins, we should ask farmers who depend on the rain, just how excited theyâ€™d be with a Maryland Governor that literally taxed the rain these farmers depend upon for their livelihood.

Whichever Democrat wins, itâ€™s Christmas for the Republican Party. I think that most Republicans understand this, which is why weâ€™re all fighting so damn hard to make sure our nominee wins, because whoever wins the Republican Nomination will be the next President of the United States of America.

But letâ€™s not get in our own way.

I hate Donald Trump. Itâ€™s true. I most certainly do. If he wins, then its a war on Clinton, or Sanders, or Oâ€™Malley, all day, every day. If itâ€™s Clinton, letâ€™s do nothing but talk about her ties to Goldman Sachs and the lack of safe spaces for young college-aged interns around her nefarious husband. If itâ€™s Sanders, letâ€™s just talk about how his spending will destroy the lives of every grandchild and great grandchild in America, overcome by debt, with no hope and no future and not even a glimmer of a chance at the kind of opportunity the Baby Boomers enjoyed.

Let the grassroots and the lobbyists yell and scream at one another, whining and complaining about how, since their candidate lost, the Republican Party is doomed.

The point is, the Democrats have always preyed upon our own factional challenges. Itâ€™s time the GOP learned a lesson from their enemies and prayed upon their factional challenges. Go after them, for a change. Talk about whatâ€™s best for the Democrat Party, the way they are always giving us advice about whatâ€™s best for the GOP. Weâ€™ve always let them manipulate us, badger us, bully us â€“ and itâ€™s never mattered how awful their candidate was. So, why should it matter how great or terrible our eventual nominee should be? Letâ€™s go after the Demâ€™s the way theyâ€™ve gone after us, preying upon their factional differences, dividing their base from their campaigns, encouraging them to either cross the aisle, or stay at home.

Primary season should be an awful and painful time for the Republican Party. Weâ€™re bigger than the Democrats and none of our factions really like one another. That said, letâ€™s not fool ourselves that weâ€™re the only ones with problems. I hope the RNC and the RPV will be aggressive in 2016. I hope theyâ€™ll take it to the Democrats with everything they have, instead of arguing, well after the fact, about the legitimacy of their own nominee.

Sage Advice for the RNC and RPV was last modified: February 1st, 2016 by Steven Brodie Tucker

Jeanine said I was tacky for linking to a post at the home of this post. Steve this is a pretty good piece, I will work on the other angle.

Btw, watch the Goldman Sachs reference, your guy is married to an executive there.

I wish the RNC would just “roll with it,” but it’s increasingly clear they want Rubio and they’re going to do whatever it takes to make that happen.
Take the new criteria for the next debate in New Hampshire, for example. The RNC recently decided that only those candidates who are polling top 5 in NH, and/or finish top THREE in Iowa can participate. How is it that they would give more weight to poll results than to the results of the Iowa caucus goers? They know that Rand Paul has a realistic shot at finishing in the top 4 in Iowa, so they’re making sure he’s being excluded.
So even if Paul finishes with 10% of the vote and is fourth behind Rubio with 11%, he’s out of the debate.
And you tell me that this game isn’t rigged. The RNC is freaking evil.

Very sage advice! (Confession: I read this, thinking it was about recipes).

I especially liked this part: “If Ted Cruz is our nominee, John McCain and Mitch McConnell might vote Democrat”

Aren’t they already Democrats, disguised as Republicans? Let them join the side they are on and stop fooling the gullible ones.

Bulls-eye! The democrat candidates are deeply flawed. We will never again see such an opportunity to take the white house.