Latest Posts
Election integrity in Virginia Update #4
The Latest Casualty of the Culture Wars
Children Adapt but What a Worrisome Adaptation
Sunday Funday Memes
The five people who control the future of...
Debates and Their Uses
1.8 million “ghost voters” in 29 states

Say Goodnight Dave—Rexrode out of the Cuccinelli campaign

It looks like, at long last, management of Ken Cuccinelli’s campaign has changed.

Lately the grassroots has not been happy with the Cuccinelli campaign.  We have begged to get ‘the real Ken’ back.  We want to see the Ken Cuccinelli we all knew in 2009, the forceful Ken who came out strongly for what he believed, the beliefs shared by the rank and file republican grassroots.  He want to see the Ken who lead the fight against Obamacare!  The Ken who was unapologetically pro life!  The Ken who lead the fight against higher taxes and government regulations!  The AG who calls the EPA the Employment Prevention Agency!   Who can forget the scene in Richmond at the Republican Convention in 2009 when Ken Cuccinelli spoke and the crowd roared it’s approval with big Gadsden Flags waving all over that massive room?  Ken was the Tea Party candidate before we had a Tea Party!   That Ken won elections.  We loved that Ken Cuccinelli!  There are signs that Ken is emerging!  He is coming back to his roots, the grassroots!  We couldn’t be happier!

First, Mark Levin, a hero of the right and the  grassroots has come out in support of Ken and will appear with him for a Constitutional Day Rally.

for a Constitution Day Rally

That’s very exciting news.  Mark Levin can be a huge help in this campaign because his radio program reaches a wide audience of conservatives, Tea Party members, and grassroots voters across the country.  Those groups could be of tremendous help financially and to help elevate Ken’s campaign to the national prominence that it deserves.  Mark Levin knows that Clinton cabal has to be stopped, starting in Virginia with Terry McAuliffe. 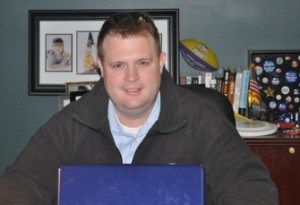 Even more evidence of a new turn in the direction of the campaign is the sidelining of campaign manager Dave Rexrode.  I’ve heard from a very reliable source that Rexrode will no longer have a prominent role in the campaign, but Ken will!  (Dare we say, Rexrode will have virtually NO role in the campaign.)   This article from today’s Pilotonline.com outlines some of the changes that are being made.  Rexrode should have been sidelined months ago.