The governing body of the Republican Party of Virginia (RPV) meets this Saturday in Short Pump to hear appeals from around the state relating to this spring’s intraparty elections. The RPV State Central Committee (SCC) will resolve controversies originating from the local GOP mass meetings in Virginia Beach and Campbell County, and from the local party canvass in Fauquier.

Yesterday, Jamie Radtke provided an overview of each of these cases here.

Last night we learned that supporters of the slating that gave rise to this spring’s discord plan to wage a positively Bolling-esque strategy at tomorrow’s SCC meeting: they will argue that my fellow SCC members and I cannot act to resolve these disputes in any way except in favor of the slaters, or risk having the Party dragged through nasty litigation right in the middle of election season.

If what I’ve heard is true (and I must say, it is consistent with signals some folks have been telegraphing for a long time), then I plan to persuade my colleagues that this is nothing more than a scare tactic, and nothing less than political extortion.

SCARE TACTICS
In just about any potential scenario tomorrow, there will be no basis for a successful lawsuit by any of the individuals on the losing side. First, without getting into boring details, the primary reason for this boils down to the fact that no court is going to substitute its judgment for our Party’s First Amendment rights.

SCC is the governing body of the Party, and in a very real sense it is the elected embodiment of the Party writ large. Under the Party’s Plan of Organization it has the final say on all disputes and controversies, and any other matters affecting the success of the Party. In other words, what is proper under the Plan is essentially what the State Central Committee—elected by thousands of GOP activists from every region of the state—says is proper.

Does that mean we should make up rules as we go? No, of course not, but any action to undo the slating will be solidly predicated on existing Party rules. The naysayers intone gleefully anytime they’re given the chance that slating is legal under the Plan, and this is absolutely, 100% true. And if the engineers of these controversies had followed the rest of the rules when they swung the divisive wrecking ball of slating through GOP meetings this past spring, there would be no basis for these appeals.

But the fact is that in each instance there appears to be a credible basis to say that the single most important rule—the one that reaches to the heart of the Party’s First Amendment free association and free speech rights—was set aside to one degree or another.

From Article I of the Republican Party of Virginia Plan of Organization (the “Plan”):

SECTION A. Qualifications
1.All legal and qualified voters under the laws of the Commonwealth of Virginia, regardless of race, religion, national origin or sex, who are in accord with the principles of the Republican Party, and who, if requested, express in open meeting either orally or in writing as may be required their intent to support all of its nominees for public office in
the ensuing election may participate as members of the Republican Party of Virginia in its mass meetings, party canvasses, conventions, or primaries encompassing their respective election districts.

(Emphasis added). This requirement stands alone, and does not depend on any other provision. In other words, even if a participant signs a statement of intent or other document attesting to his or her fidelity to the Party, the body deciding the appeal can still make a determination that the person was not in accord with the principles of the Party. The statement of intent (often derided as a “loyalty oath”) is but one tool that GOP committees may use to help determine if a person is a Republican, but it is by no means the only tool available, and it simply not the final word (though it often serves as a convenient proxy). Among other things, we can look to voting history, whether the person has made donations to candidates opposing Republicans, or to evidence of other political activity, such as posting Democrat yard signs or publicly opposing Republican nominees.

This is an inherently subjective judgment. As much as we’d like to have an objective, bright line rule, there is no rule that can capture every circumstance. In these instances, we can hearken to the words of former Supreme Court Justice Potter Stevens: we know it when we see it.

Here are some examples:

FAUQUIER
When a candidate complained to the then-chairman that their upcoming canvass was not properly restricted to just Republicans, the chairman refused to act, saying as follows:

There is very little we can do. Per the party plan, the Canvas [sic] is open to all registered voters. The only thing we can do is ask them to sign a pledge which the committee has been reluctant to do in the past.

(Emphasis added). But that is just wrong…it is not open to all registered voters, only Republicans. By itself, that lapse might not have even generated a controversy. But this violation was accompanied by a widespread, organized campaign involving the Democrat-aligned Piedmont Environmental Council, among others, to prey on the fears of liberal Fauquier residents that “extreme property rights activists” might gain advantage if they didn’t turn out to help keep those barbarians at bay. The FCRC member that coined that descriptor, Jessica Swann, also had this to say in the same email:

I’m asking for your help in achieving that goal. You do not need to be a Republican. Democrats, Progressives, Independents, Libertarians – all registered voters in Fauquier County are welcome to vote in the Fauquier County Republican Canvass on March 22nd, 2014 at the Warrenton Community Center, from 9am -2pm at 430 East Shirley Avenue (near the Wal-Mart). You must show proper identification; to ensure only Fauquier County residents are voting in this election.

Accompanying this open invitation for “Democrats, Progressives, Independents,” etc. to help elect the Republican committee was a complete open door—no type of screening or effort to limit the participation to those qualified under Article I of the Plan. #SlatingFail 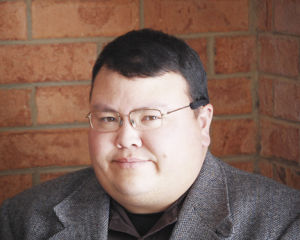 As previously reported, the controversy here arises from the activities of a local third party group, the Independent Conservatives of Campbell County (ICCC) and sympathetic local Republicans recruiting the participation of Democrats and other non-Republicans in the Campbell mass meeting. The direct beneficiary of this activity was John Ferguson, who was elected chairman of the Campbell County Committee at this meeting.

Prior to the meeting, a Ferguson supporter obtained the email addresses of all county employees and sent a message warning them in dire tones that all that stood between extremist Republicans and them losing their jobs was their participation in the GOP mass meeting:

[I]t has become clear that the Board of Supervisors is just one member away from being totally controlled by political extremists whose only agenda is to blindly cut taxes and ruthlessly slash the budget with no regard for the damage they will inflict on Campbell County residents and to you as faithful employees. . . . am part of a large group of concerned citizens who are doing all we can to keep Campbell County from falling into the political control of these extremists. Please join us at this meeting and fight for the future of Campbell County and possibly the existence of your job.

This email also made the point that attendees need not be Republicans, and that any registered voter could participate. Ferguson himself, in his own campaign literature, made the same point:

You will be asked to sign a paper declaring your “intent” to vote Republican…. However, this pledge is absolutely nonbinding, and there are no candidates selected at this time.

Also on the State Central Committee’s docket Saturday is a separate action relating to how the same people behind the slating in Campbell sneaked in an attempt in the closing seconds of the 5th District Convention to strip conservatives of voting rights on the 5th District Committee. I don’t know if this actually will be heard, but there is also an accusations that Jon Berkeley, then a candidate for 5th District Chairman, improperly discarded delegate pre-file forms from Charlotte County. 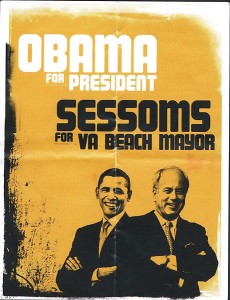 This set of controversies began with the exclusion of hundreds of delegate pre-files in favor of a “slate” of just 32 of Sen. Frank Wagner’s (R-Virginia Beach) closest allies and their spouses. As with Campbell County, the slating strategy here appears to have relied on recruiting Democrats and other non-Republicans. In but one example, according to eyewitness testimony, well over 100 municipal employees were provided transportation to the mass meeting venue, and during the proceedings appeared to blindly follow the signals provided by their boss, Virginia Beach Mayor Will Sessoms. I am not a fan of the term RINO, and think it is ridiculously overused (most times improperly), but in the case of Sessoms, the shoe fits. Sessoms made a huge splash last year in publicly supporting Terry McAuliffe and Ralph Northam over Ken Cuccinelli and E.W. Jackson, and has supported numerous other Democrats over their GOP opponents.

In Virginia Beach, as with the others, there are a number of other factors in play, including complaints about adherence to the rules during the mass meeting and subsequent complaints (from both sides) about procedural errors during the appeals process. All of this, in addition to the Article I issues, will be hashed out tomorrow.

CONCLUSION
Opinions of my friends on the State Central Committee will differ. I respect that, and even welcome it as good for the Party to have a wide range of opinions represented on SCC. When we disagree, we will do it politely and with the respect that our constituents deserve. But I hope that we don’t hear scare tactics, and I hope we don’t hear coercive threats on behalf of people who hope to join our body. Virginia Republicans deserve better.