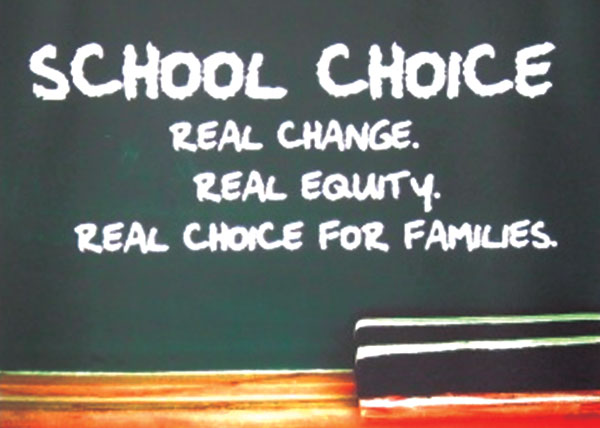 Delegate Dave LaRock’s bill for Education Savings Accounts passed today in the House of Delegates. Parents may finally have some say in how and where their children are educated. Earlier today Delegate LaRock issued this press release:

VIRGINIA HOUSE SAYS “YES” TO EDUCATION SAVINGS ACCOUNTS
Richmond, VA – The Virginia House of Delegates threw their support behind parents and students today, passing Delegate Dave LaRock’s bill to enact Education Savings Accounts by a vote of 53-46.
“Virginia’s House is serious about enacting meaningful, innovative improvements to education in our Commonwealth. This bill will benefit students, both public and private; parents, and taxpayers as we provide a better-quality education while freeing up state education dollars to be spent where they are most needed,” LaRock said of his bill. “Parents want school choice, and this may be the year they finally get it.”
Education Savings Accounts are already in use in other states, resulting in high satisfaction levels and savings to state education budgets.
“Where other states have enacted ESAs, they’ve been immensely popular and a great boon to children who are struggling academically. This is a proven step we can take to deliver better education results to our children, without breaking the Commonwealth’s budget.”
The bill has already passed the House Education and Appropriations Committees, and will now move on to the Senate.
“We’re taking this one step at a time,” LaRock added. “This bill is receiving support and acceptance among parents, teachers, education advocates and state and local school employees that is exceeding all our expectations, but there’s still opposition. We intend to stick with this until it passes and the ink is dry.”

I and Mr Dickinson have commented extensively on this bill previously in a TBE atricle of Jan 26, 2016 “Putting the All in “All” by Delegate Dave La Rock. He and I are in clear disagreement on both the nature and the effect of this bill regarding the general education issue in Virginia. But to briefly reiterate my position, this is really nothing more then a new entitlement subsidy (more of a tax bill then an educational bill) that is not really intended or able to simply reallocate funds to the benefit of the student but rather to provide some measure of financial tax relief for a small segment (around 12% today) of the state’s population. The reallocated funds this bill is proposing to be pulled from the local school budgets leave a net negative budget situation, period, and on a per student basis generally will not cover the typical full necessary expenditures for enrollment in a parochial or private school environment. So without additional parental funding this program is NOT going to be readily available to Virginia’s lower income families’ lacking the incremental desposable income to further supplement their child’s education but will in effect provide nothing more then a tax relief stipend refunded to upper middle class and wealthy parents to assist underwriting placement of their children in private parochial and/or home school educational environments. If you fall into the 12% Virginia population category of having made the choice to place your child in such a non public educational environment and are facing local school taxes (generally via county property taxes) plus the tuition of a private schooling environment I fully understand why you find this appealing (although I find the home schooling argument less justified) but I have always maintained that special legislation targeted at select groups of citizen segments less then conscionable. This is one of them and reminds me more of a Democratic legislative approach targeting specific population groups then a solid proven approach to open educational choice like the charter school structure. If the Virgina legislative process having rejected the open choice charter school, that has proven to be a working model for improvement in minority and high student concentration urban environments where school and student preformance has long been an ongoing problem, to in turn pass this type of specialized tax relief effort for a small segment of the high end income voters then the message to the lower income Virginia population couldn’t be more lould and clear. If you truthfully ask yourself why the Republican Party is daily becoming of less and less interest to the growing percentage of working class and lower income famalies across the state then this type of special interest bill furthered in the face of the outright rejection of a proven open choice solution like the charter system supported by over 70% of recently polled Virginia voters could not be a more contrasting and clear answer.

Del. Dave LaRock’s (R-33) introduction of the “Parental Choice Education Savings Account” bill is the most significant piece of educational legislation since desegregation. It begins to right longsuffering injustices and will demonstrate that the commonwealth is committed to the education of all children and not just some children.

The state mandates compulsory education. Further, it allows a parent to choose the type of school their child will attend: government, private, or home. The multi-generational injustice has been the majority forcing its will on the minority and dictating that all parents must pay for government run schools first before paying for their own privately or home educated child.

Del. LaRock’s bill would allow parents to create an educational account for every student not in a government school. The state would provide funds up to 90 percent of the value of the state’s contribution for similar students attending government run schools.

This is no small matter. In Loudoun County alone, almost 10,000 students do not attend government-run schools. At an average per pupil cost of about $15,000 per year, this cohort saves LCPS and the county $150M per year. In return for this enormous annual savings, these parents watch almost 70 percent of their property taxes and a significant portion of their state income taxes go to schools they are not required to use and from which their children derive no benefit.

That injustice is about to end. Parents will finally see their educational tax monies support their own children’s education and not their neighbors, and the Commonwealth of Virginia’s educational funds will finally become “public” for the first time in history.

Comment deleted for gratuitous insult and name calling. While we certainly permit democrats to post here, they can’t come here solely to insult.

Ms. Martin, you wrote: “Parents may finally have some say in how and where their children are educated.”

Are you an idiot?