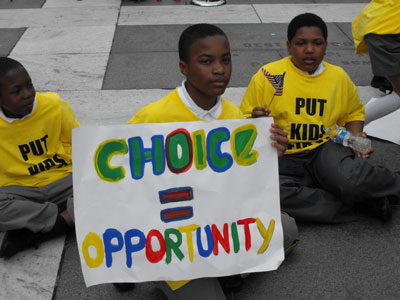 School Choice NOW More Than Ever

Having worked for school choice for years, I have learned a few things.  ALL children achieve equal results through 3rd grade but after that most black kids fall behind and never catch up.  One big reason is the “whole language” nonsense in reading.  Letters/the alphabet were created so that anyone who learns the sounds of individual letters can “sound out” most words (forget “tough” and words that make no sense alphabetically).  When over 70% of any group of children are born out of wedlock and raised by a single parent who must work, the results are devastating on kids.  They receive precious little encouragement at home as the parents depend on the schools to get their kids educated.  Little by little the educational slide becomes an avalanche where most never catch up.

Today, rampant and capricious accusations of racism plague us so teachers, on advice from their unions, turn their backs on classrooms while talking to the chalkboard and leave it up to students to fend for themselves: learn if you want to, disrupt classrooms if you want to.  The results are the disastrous “education gap” where Asians and white kids score way higher than Cental/South American kids (many of whom come to the US with limited, if any, English language speaking ability) and black kids.  These are facts.  What to do?

EVERYTHING has been tried, from multi-million dollar high schools to smaller sized classes to teachers who have “assistants” in class to no testing to whatever the latest fad is.  NOTHING has worked to close the education gap.  So, Common Core came into being.  This ridiculous curriculum was created to close the gap by making some instruction so convoluted that no one can understand it.  Result: everyone fails.  Then, make some subjects so easy that everyone scores high grades.  Result:  everyone passes.  Bottom line:  all kids score about the same and voila!!  No Education Gap!!!

Unfortunately, this guarantees national failure because other countries actually care about their children learning so as to become competitive around the world and, therefore, make successes of themselves.  What to do?

The only answer is school choice for everyone.  NO CHILD should be trapped in public schools that won’t teach.  Look around:  most public schools (nationwide) remain closed using the so-called COVID-19 flu as an excuse.  Note that teachers are still getting paid.  However, private schools are mostly open.  Which set of students do you think will advance and which will not?

Private schools are competitive…that’s right, you must perform up to grade level or out you go…but kids are taught to succeed by drilling on subjects, by being required to do homework, by being taught to behave in class, and by being prepared for tests.  Unfortunately, private schools (to include religion-based institutions) cost thousands of dollars a year because they are not subsidized by governments.  Today, it costs Fairfax County ABOUT $13,000 yearly (more?) to educate the “average” child per year.  Channeling some of that money (half?) to private schools on behalf of children whose parents don’t want their kids in public schools would eliminate the education gap in short order, to the benefit of all America.  The teachers’ unions are today’s version of George Wallace blocking the schoolhouse doors.

ALL KIDS can succeed.”