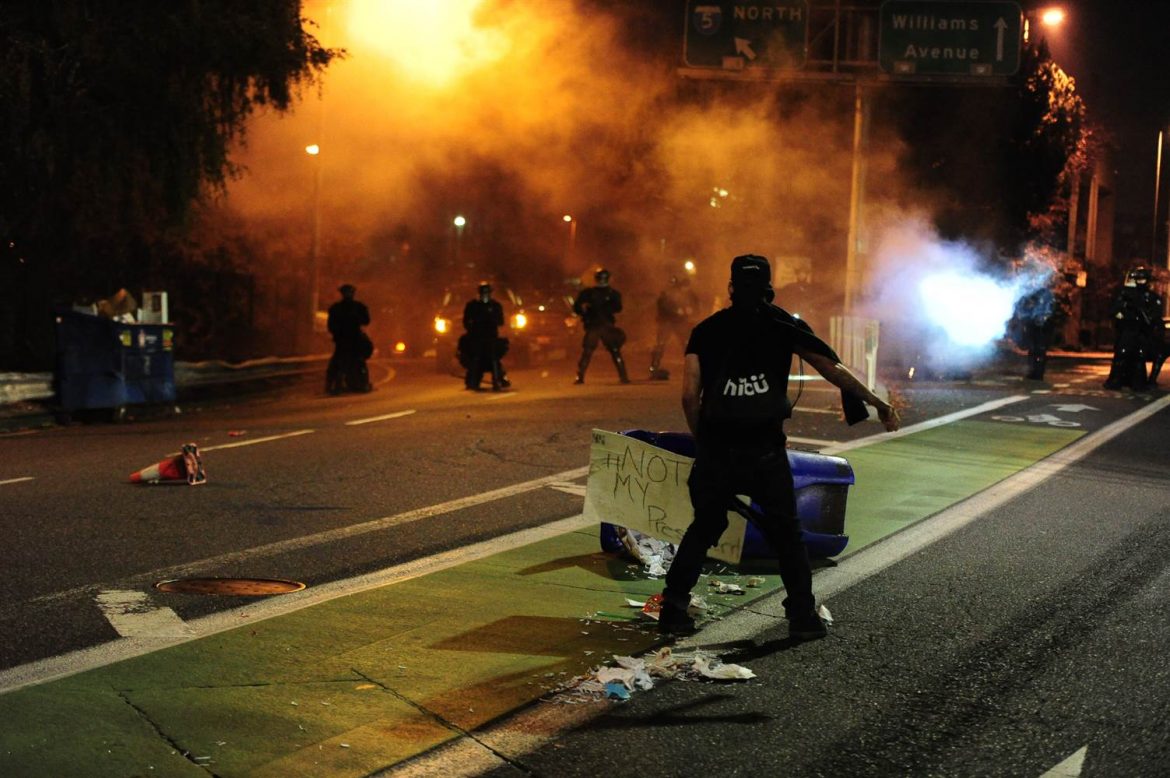 Today, numerous cities across the country – including some long regarded as models of progressive comity and orderliness – are enduring organized campaigns of violence, property-destruction, and resistance to law-enforcement. Roving mobs are pulling down statues of historical figures, smashing store-windows, looting, burning, and even shooting.

Portland, Oregon – an iconic left-coast city of (supposedly) superior progressive thought – has had eight straight weeks of nightly riots, with no end in sight. The situation has become so uncontrolled that President Trump has dispatched federal agents to protect federal buildings in the city from being damaged. In a recent public appearance to demonstrate solidarity with the mob protesting the presence of federal agents, Portland Mayor Ted Wheeler was tear-gassed.

Portland is one of a score of cities where demonstrations protesting the death of George Floyd have morphed into prolonged violence and property-damage. The riots have destroyed countless businesses – many of them minority-owned – and caused damage in the billions of dollars. A precise count of deaths is difficult to find – possibly because it would counter Big Media’s “peaceful demonstration” narrative – but certainly dozens of people have been killed in riots across the country during the past two months.

Most, if not all, of the cities enduring the prolonged rioting are “governed” (using the term loosely) by Democrats who appear willing to countenance the disruption, which they insist on characterizing as “peaceful demonstrations.” In several cities, mayors have ordered police not to oppose or engage the “demonstrators” in any way. Some mayors have also signed a letter opposing the “interference” of federal agents, which they have called “jackbooted storm troopers.” (Jawohl!)

In 1957, President Eisenhower sent 101st Airborne troops to Little Rock, Arkansas, to protect nine black kids so they could integrate a public high school. And in ’62, JFK sent 500 federal marshals, plus elements of the US Army’s 2nd Division, to quell the riots which erupted at Ole Miss, when a black student – James Meredith – attempted to enroll at the university. But today, mayors are denouncing the president’s decision to send law-enforcement “agents” – not troops – to cities where prolonged rioting threatens to undo the stability and safety of their cities. Once-serious lawyers are questioning the president’s authority to intervene in these “local” matters. City attorneys are suing to stop the entry of federal agents. 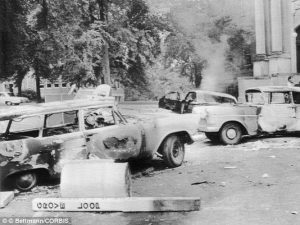 What in the world is going on? When did mayors start defending rioters who are damaging businesses, government buildings and homes in their cities? Who gave those mayors the authority to stop police from enforcing the law? And why would they allow all this to go on for weeks without sending in the riot cops to make arrests and drive out the rest of the mob?  The situation is so absurd that it couldn’t be a plausible scenario for a Saturday Night Live skit. It’s the world turned upside-down.

As I see it, what’s going on here is a new (for us) political tactic – straight out of the Marxist playbook – that I call “scorched earth blackmail.” It means that a cabal of politicians – i.e., the aforementioned Democrat mayors and governors – are committed to letting rioting, looting, property damage and violence continue in their jurisdictions until President Donald Trump is removed from office, one way or the other.

No, it’s not really about “racism” or police-brutality. Maybe it started out that way, but the death of George Floyd was just the springboard for activists whose main objective is seizing power. The uproar of that scorched earth movement – under the field-leadership of Antifa, Black Lives Matter, and other less visible anarchic and Marxist groups – will continue on through the November elections, and possibly beyond if Mr. Trump is re-elected.

Indeed, riots might become a permanent political fixture in the country, unless voters decide to kick out those “leaders” who have countenanced the wreckage of some of the country’s great cities. But I’m not the first writer to wonder if the electoral systems of some of those cities might already be so corrupted that political change by conventional means is no longer possible.

The “blackmail” aspect comes in because complicit politicians, including some at the highest governmental levels, have passed the word that this unsettled, unsafe environment – which will gradually spread from the cities into the suburbs – is what citizens can expect if they don’t give the boot to The Donald and accept Democrats’ socialist vision. That vision will “fundamentally transform” the country into an Edenic paradise of no responsibilities, no debt, no work, no laws, no cops, free everything, and universal brotherhood – i.e., something like “The Big Rock-candy Mountain,” where…

“…the cops have wooden legs; the bulldogs all have rubber teeth, and the hens lay soft-boiled eggs…”2

But this really isn’t funny. Democrats have tried to sell the free stuff vision in the past, but voters weren’t buying. So now the gloves have come off. This time Dems are saying, “No more Mr. Nice Guy. Take this deal, or else! Otherwise, we’re coming out to your cushy suburbs to burn down your #@%^& house (and your little dog, too!)”

“Normal culture” denizens, who haven’t noticed lately what Democrats are peddling, and who remember “good old” gaffe-prone Uncle Joe Biden of yesteryear, might think both parties still want the best for the American people. Maybe the party of JFK is still in their rear-view mirror. But that Democrat Party is long-gone. With his views of patriotism, love of country and service, JFK couldn’t be a Democrat today. (OK, his preference for a well-turned ankle would still give him some Democrat-cred, but otherwise, no cigar.)

America has come to a fork in the road. One of its two political parties has abandoned the governing “compact” which has been followed – with a single exception – for more than two centuries. Our “deal” (as Mr. Trump might say) has been an agreement – unwritten, but everywhere assumed in our Constitution – that each political faction will accept and cooperate with the governance of whichever faction wins an election. Losing factions may work hard, within the rules, to convince voters that their policies are preferable and correct. But outright disobedience of law and undermining the winning faction’s governance is beyond the pale – until now.

That compact, which has given Americans the freest, strongest, most prosperous nation and way of life in human history, is being trashed. Ruthless opponents of the compact now denounce it as “racist.” The president’s adversaries speak disrespectfully of him, as of no president since Lincoln. TV reporters denounce the president as racist, xenophobic, homophobic, and misogynistic. Former civil servants of the last administration admit to having tried to subvert the current president’s campaign for the office.

There seems to be no curb on the statements and behavior of anyone, with respect to their treatment of the world’s most powerful and influential public official. Nothing that he does is acceptable. Schoolchildren are taught that his presidency is illegitimate, and that he is the personification of all that is evil and disgraceful. Down at the personal level, long-time relationships and friendships are being permanently ruined by disagreements over Mr. Trump. People are losing their jobs because they spoke approvingly of him.

All this, then – the riots, the wreckage of once-prosperous and industrious cities, the subversion of justice, the abandonment of our governmental compact, the continual debasement of the president and his administration, the enlistment of anarchic organizations who want to tear down the country – and for what? To destroy a president whose entire tenure has pulled us out of Middle East wars and produced the strongest, most prosperous economy in the country’s history.

Is this what we’ve come to? Weak-kneed citizens cowering in fear, hiding under the bed, and swallowing the lies being told about our president – while criminals burn, kill and destroy everything that is good, decent, brave and noble. Are we so pusillanimous that we will accept any ignoble conditions in order to obtain peace and tranquility?

I hope not. Blackmailers can be stopped only when their victims stand up to them. For us, that time is at hand. Let’s arrest the criminals, drive out the rioters, and throw out the bums who have been letting it all happen. Enough is enough.