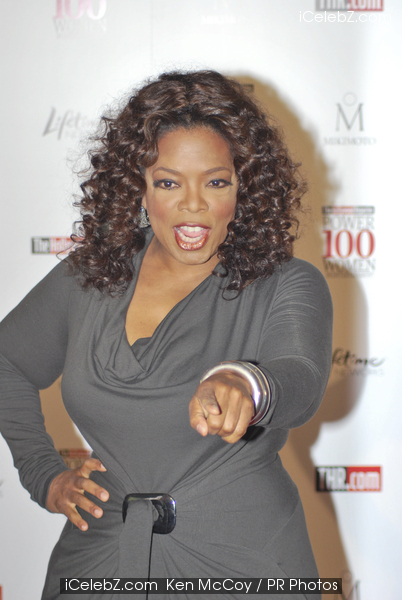 Search for a New Messiah

Here in Northern Virginia I occasionally drive past a church in North Springfield that displays a stained glass window depicting some Biblical scene that includes Jesus. At night, with the interior of the church illuminated, the window shines out in all its vivid colors. But during the day a curious inversion occurs. With daylight shining against the glass from the outside, and with no illumination from inside the church, the faces of the characters in the scene appear black. Acquaintances who live nearby irreverently call it “the church of the black Jesus.”

I thought of that church this past week when Democrats went bonkers over the prospect that TV-star Oprah Winfrey might be their next political “messiah.” Media organs were near-orgasmic in praise of her poise and presence at the Golden Globe awards ceremony, as she delivered a 7-minute speech recalling her experiences growing up poor in 1960s Mississippi and admiring the great black actor, Sidney Poitier. She lauded “the press” (which she said was “under siege”) for “speaking the truth…as we try to navigate these complicated times…” She celebrated the heroic black women who stood up to abuse and fought injustice in past years. And she promised girls watching that “…a new day is on the horizon…” when none of them would have to suffer ill treatment.

It was great political theater – certain to warm the heart of every true Democrat. Ms. Winfrey is an attractive, capable speaker who, in just a few minutes, touched on several Democrat hot button issues and constituencies: poverty, women, racial minorities, abuse, show-biz, success, and even their beloved “news” media. Only the “huddled masses” of illegal immigrants were missing from her list of Great Mentionables.

She also said nothing about Donald Trump – undoubtedly a deliberate omission, since her inspiring speech was really all about her poor beginnings, her amazing rise to mega-stardom and wealth, etc. The merest mention of the (hated) Donald would have been like throwing a worm into the punch-bowl. (Besides, isn’t the guy just a short-timer?)

This is not to denigrate Ms. Winfrey’s business acumen and entertainment-achievements. You don’t get where she is without smarts and a world of talent. And certainly a black woman working in an industry dominated by white men has had plenty to overcome. There’s no doubt that she is a very able and successful woman.

But this commentary is not about Oprah Winfrey’s singular record. It’s about Democrats’ quasi-religious search for an attractive new “messiah” who can save them from their own bankrupt policies and restore the electoral success they enjoyed with Barack Obama.

As Democrat pooh-bahs now recognize, Mr. Obama’s most powerful and attractive attribute was his dazzling – some said “messianic” – persona. He was young, good-looking, stylish, and well-spoken. He bantered easily with the hosts of celebrity TV-shows. He had an attractive family. He rapped with foreign leaders. He had all the answers. He shot hoops with the bruthas. He was hip beyond the dreams of hipness.

Policy positions? Who knew? Who cared? Here, at last, was a sensible, personable black guy who would help us shed our racial baggage and move us forward into broad, sunlit uplands. At a 2007 New Year’s Eve party I asked a young woman who she favored in the coming presidential campaign. She quickly answered, “Barack Obama.” When I asked what she liked about his prospective policies, she couldn’t come up with anything specific. “He just looks and sounds so good,” she said.

Helped by a scary crash of some big financial firms, the juggernaut of Barack Obama’s campaign rolled irresistibly over Hillary Clinton, and then over aging John McCain. Obama swept into office like an Olympian god. Indeed, some thought he was exactly that. (Had Gilbert and Sullivan composed a song for his inauguration, it would surely have included “Oh rapture!”) He received the Nobel Peace Prize after a few months in office. Millions thanked the Great Whoever for letting them live to see this blessed day.

So how did it all work out? Fortunately, there’s not enough space here to chronicle the Age of Obama. (I don’t want to see the whole thing again!) Suffice it to say it didn’t go well. A talk-show caller summed it up: “Sure, I voted for the guy. He looked and sounded great. But, heck, I never thought he would screw up this badly…”

In Oprah Winfrey perhaps Dems see the same attractive personality and the same racial dynamic that swept Mr. Obama into the presidency and gave their party eight years of power. In truth, though, this Democrat-strategy for winning the presidency is not really new. They’ve been using it for nearly 60 years.

In 1960 Democrats first used the “rock-star” strategy by fielding a handsome, debonair young Irishman whose self-deprecating humor, glamorous wife, and attractive family charmed the nation. His Catholic faith made many Protestant voters wary, but made him attractive to Catholics. Savvy reporters knew he didn’t take religion very seriously though. Rumors of his adventurous preference for a well-turned ankle convinced the media and the political establishment that he was just a “regular guy.”

More importantly, he was the first presidential candidate to use television effectively. Against JFK’s rakish good looks, the somewhat sinister-looking Nixon, with his permanent 5-o’clock shadow, had little chance under the camera’s unblinking eye. The election was a squeaker, but JFK’s dad – a former mafia run-runner during Prohibition – managed to bankroll enough bogus votes in Illinois and West Virginia to cary the day. Despite rumors of rampant voting “irregularities,” Mr. Nixon declined to contest the election, saying it would be “bad for the country.” 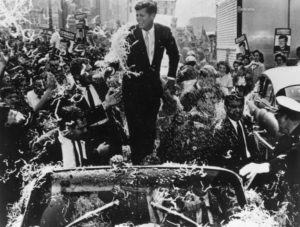 After JFK’s gruesome murder – which I still consider the worst public event of my lifetime – Democrats tried to hold the presidency by running unattractive candidates on policy alone. LBJ held onto the office with a sympathy-vote in 1964. But he bumbled into a disastrous war in Southeast Asia and so offended Southern Democrats with his pro-black civil rights policies that he abandoned re-election plans in ‘68. Dynamic anti-war candidate Bobby Kennedy looked like a shoo-in for the nomination, but his June assassination capsized the Democrats’ boat. Senator Hubert Humphrey tried valiantly to hold the party together, but it was no-go. Segregationist George Wallace split the Democrat-vote by winning 13.5% of the popular vote and five southern states. This let Richard Nixon take the election with a 43% popular vote and 301 electoral votes.

After the fiasco of the Watergate scandal, which had revealed Richard Nixon’s foul-mouthed conversational style, the public was ready for an upright man in the office. Georgia Governor Jimmy Carter looked like that guy. I recall conservative church-friends telling me that they planned to vote for Mr. Carter because he was a “born-again Christian.” I agreed that he seemed to be a fine man, but I reminded them that he was also a Democrat who would bring such a gang of brigands, varlets, New Deal leftovers and far-lefties into his administration that his devout professions of faith would be forgotten.

Four years later some of those friends had the grace to acknowledge that I had been right. Appearance and public persona were not enough. Mr. Carter’s leftist leanings messed up enough things in the country that exasperated voters gave a septuagenarian B-grade film-actor a landslide victory – not on persona, but on policies that eventually unleashed an economic boom and the collapse of the Soviet Empire. 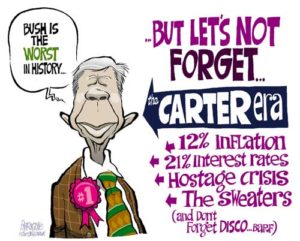 After 12 years of Reagan-Bush government, Dems reprised the dynamic young-guy strategy with Arkansas Governor Bill Clinton and his leftist wife. The attractive southerner, with his aw-shucks, good-old-boy manner, ran on the improbable platform that we had “the worst economy since the Great Depression.” Considering the claim absurd, President Bush declined to contest it – thus letting the idea that it “was time for a change” gain traction among young voters who wouldn’t have known the Great Depression from the Great Houdini. And many GOP voters – offended by Mr. Bush’s welshing on his “no new taxes” pledge – went for third-party candidate Ross Perot, giving him 19% of the popular vote and allowing Mr. Clinton to slip in with just 43%.

During the ’92 campaign, Bill Clinton’s able lieutenant – his lovely leftist-wife, Hillary – quashed what came to be called “bimbo eruptions” from her husband’s former romantic escapades. But the “stuff” finally hit the fan when his ongoing affair with a young intern came to light. The resultant scandal produced a Special Prosecutor who brought charges which ultimately led to Articles of Impeachment and a Senate-trial. Mr. Clinton survived because Democrat senators held firm on the conviction vote, but his presidency was mortally wounded. His disgrace arguably led to the narrow defeat of his vice-president, Al Gore, in the 2000 election.

Democrats were sure that identity-politics would carry the first female candidate to victory last year, but they somehow failed to comprehend how their environmental, health-care, economic and immigration policies had harmed and offended traditional constituencies like Catholics, Rustbelt-workers and coal-miners. They also had forgotten – if they ever knew it – that voters dislike open corruption in a candidate. Analysts are still arguing over how Mrs. Clinton blew what should have been a sure win, but to this observer it’s clear: her campaign crashed on the immovable rocks of disastrous policies and personal corruption in office, and she lacked the personal attractiveness that might have saved it.