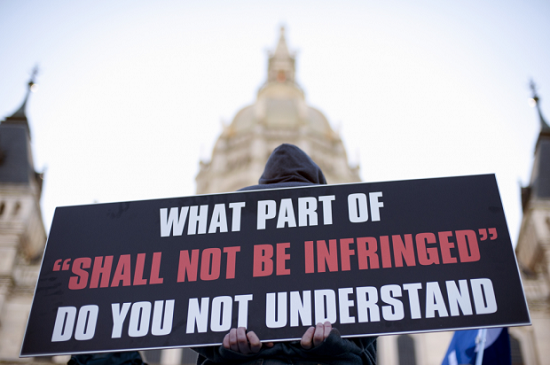 Second Amendment a Priority in 2017

The 2015 legislative session began when Governor Terry McAuliffe’s anti-gun legislative agenda was squashed in aÂ Senate Committee. This was only the beginning of the battle over the 2nd Amendment in Virginia that year. Terry McAuliffe and the Virginia Democrats had a strategyÂ to take back the Senate basedÂ entirelyÂ aroundÂ passing more gun control laws in the Commonwealth.

The strategy backfired and Virginia Democrats failed to gain a single seat in the Senate. The Republicans retained control of the General Assembly and were able to restrain yet another year of the Governors’ liberal agenda.

Terry McAuliffe is not the sort of man who takes lessons from the past. After all, he is a liberal and an idealist. We will once again watch the Democrats run against gun ownership in 2017. Thankfully, our bench of Republican candidates couldn’t be stronger on the issue. We are already receiving fliers featuring Senator Bryce Reeve’s in camo, holding a rifle, touting his outstanding record on the 2nd Amendment.

It is clear that the Republicans will be all too happy to once again run for office on a platform that placesÂ gun rightsÂ at the center of the debate. And why shouldn’t they be?

According to the Virginia Citizens Defense League, Senators Jill Vogel (running for Lieutenant Governor), Charles Carrico, Sr., Amanda Chase, Siobhan Dunnavant, Bill DeSteph and John Cosgrove all have aÂ 100% rating on their commitment to protect gun rights in Virginia. Bryce Reeves’ mailers do not exaggerate his commitment to gun rights either, sporting a solid 98% rating from VCDL. Senator Tom Garrett is running for Congress in the 5th District and he is ratedÂ with a 97% score. Delegate Rob Bell, a candidate for Attorney General, was given a 100% rating.

The overwhelming majority of Republicans currently serving in the General Assembly are rated a 95% or better.

With no shortage of Republicans with a strong record on the 2nd Amendment, we can rest assured that whomever wins our primaries will be well positioned to take on Governor McAuliffe’s agenda. It remains of the utmost important that our legislators remain intractable on gun rights, since Democrats have demonstrated a propensity toward achieving their goals through incremental change.

Democrats never ask for the whole ball of wax.Â AtÂ first, they willÂ only want to ban a few guns or add regulations for just a few case by case scenarios, but it will never be enough. They want all weapons out of the hands of the American People. They are simply smart enough not to advertise that fact. Thankfully, Republicans in Richmond haven’t been fooled and are ready to battle on our behalf in 2017.

With all the terrorist attacks home and abroad and Obama beating down the police everywhere, I believe the majority of Americans will be supporting the 2nd Amendment candidates. People are afraid. Dems who point to Europe for an example of countries who are safe and have strict gun control laws are looking very foolish. Actually Europe is wising up and they are arming themselves. Here is an interesting article about Germany…. https://www.rt.com/news/354061-germany-weapons-licenses-increase/

When anti-gunners complain about the second amendment, I ask them what the individual European should do to protect themselves against terrorism since they have no second amendment rights and are totally dependent on the government for protection. Leads to a very interesting discussion that is becoming increasingly relevant in America.

Think of this: last year at this time, Muslim refugees were being greeted with flowers and welcome signs throughout Germany. No people the German people understand that the vipers are in the hen house – and they want to throw out the government of hat brought them in. All in about a year.