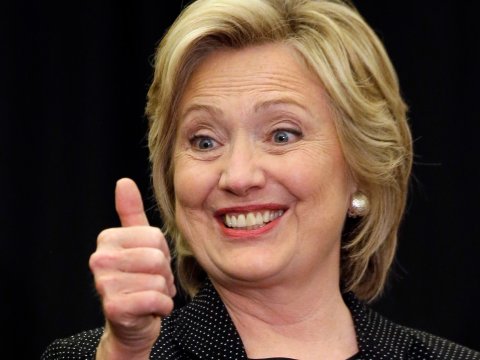 Secretary Clinton may have figured out the secret formula to winning election while being incredibly uninspiring and unpopular – making people hate the other guy more. Trump is dangerous and a bad guy. That’s the Clinton narrative we’ll see through November and so far it’s been effective. In conjunction with Clinton’s friends in the press, the Clinton Campaign appears to be taking their polling data at face value, choosing to adapt to the Secretary’s high unfavorables while simultaneously fanning the flames of  the unpopularity of her opponent. This is as clever as it is simplistic.

Donald Trump’s bombastic flare for the dramatic is both bane and boon, as Americans may interpret his behavior as arrogant, or worse erratic. Voters want to feel comfortable and safe with the leaders they choose. While The Donald has demonstrated an ability to bring new voters to the table, he’s bleeding republican support. Meanwhile, Hillary is securing her base as fewer and fewer Democrats say they’ll vote for Donald Trump.

One attractive narrative would be Hillary Clinton’s involvement with The Clinton Foundation. However, instead of hammering Hillary with accusations that she cannot be trusted to put the interests of the American People ahead of the individuals, organizations, corporations, and foreign powers which fund her foundation, Donald Trump blows the narrative and asks Republicans to give her the benefit of the doubt.

Donald Trump cannot be afraid of attacking Secretary Clinton on her family’s business, regardless how much money he’s donated to them in the past. The Clinton Foundation narrative is legitimate. Why should we give Clinton the benefit of the doubt after Clinton’s Uranium One debacle as Secretary of State?

As the Russians gradually assumed control of Uranium One in three separate transactions from 2009 to 2013, Canadian records show, a flow of cash made its way to the Clinton Foundation. Uranium One’s chairman used his family foundation to make four donations totaling $2.35 million. Those contributions were not publicly disclosed by the Clintons, despite an agreement Mrs. Clinton had struck with the Obama White House to publicly identify all donors. Other people with ties to the company made donations as well. The New York Times

As President, Hillary Clinton could very well be representing foreign governments more than the American People. We know she has in the past. Sadly, Donald Trump isn’t taking advantage of an obvious narrative.

In Iowa, according to Quinnipiac Bill Clinton currently enjoys a 51 to 44 favorable to unfavorable rating.  Bill Clinton is yet another missing narrative from this election. Looking at these numbers, I might consider running ads in Iowa that focus on President Clinton, as well as Secretary Clinton.

Trump’s support among Democrats is dwindling every day. Given the sheer number of Republicans Donald Trump has lost during the primaries, he needs to win big with Independents and Democrats.

“Iowa shows the importance of candidates tending to their base,” Brown said. “Even though Trump is on the right side of a 45 – 41 percent split among Hawkeye State independent voters, Clinton is able to tie him because she is getting 97 percent of Democrats compared to his 85 percent of Republicans.”

What do independents care about? Historically, independents have been won with promises of a more prosperous economy and subsidies for whatever their State is known for (oil, corn, wheat, natural gas, coal etc.). The economy ought to be Trump’s primary focus heading into the home stretch in October.

For Donald Trump to be successful, he must control the narrative. This means he has to find a way to beat the media at their own game. I won’t count him out. He’s done it before. If Trump does not take the narrative back from Secretary Clinton, he likely won’t win Pennsylvania and Ohio which he’ll absolutely have to win if he loses North Carolina and Virginia, as I expect he might. This means that Trump has to pick up more Democrat and Independent support in those States and he’s running out of time.

Hammer Hillary Clinton. Talk about bringing jobs back to the United States. Talk about lower taxes and a more prosperous America. Talk about how much you love this country and how you’d never sell us out to the Russians or sell out our citizens like Hillary did in Benghazi. Control the news cycles. Be disciplined and a little clever. Don’t ever, ever miss an opportunity to strike.

That’s my two cents, for whatever they are worth.

I’m obliged to point out that Hillary Clinton stopped being “Secretary Clinton” on February 1st, 2013.

Hillary is spending tens or hundreds of millions of dollars advertising on the mainstream media. Trump is spending peanuts. Why would the MSM slam their golden calf?