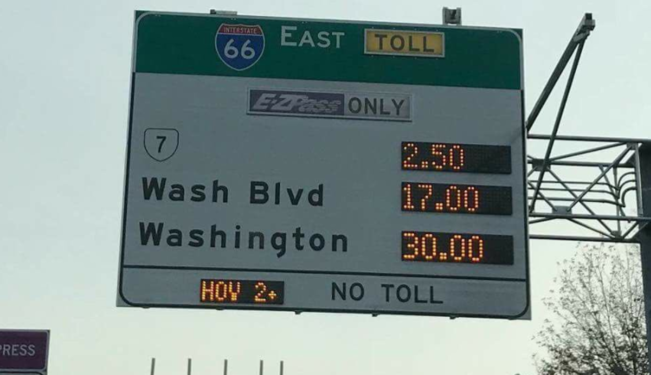 Hamilton, VA – Senator Richard Black and Delegate Dave LaRock, both of Loudoun County, today announced filing of legislation which would provide desperately-needed toll relief in Northern Virginia. If successful, HB 1489 will reduce tolls on Interstate 66 Inside the Beltway (ITB) and the Dulles Toll Road (DTR) by:

Delegate LaRock said, “Northern Virginia was already one of the highest-tolled regions in America – now, commuters driving the 36 miles from Leesburg to Washington, DC during peak times travel on three distinct toll roads, paying as much as $53 one-way. My constituents call this ‘Highway Robbery,’ and I agree. Tolls this high hurt families, hinder economic growth, and are just unacceptable.”

Senator Black also pointed to recent problems with the tolling system, stating “It’s ironic that the I-66 tolling equipment failed so spectacularly and so quickly. People entering the toll road did so without knowing that the trip would cost $39. These tolls are among the highest in the nation. The new tolling system is not off to a good start.”

Delegate Tim Hugo, vice chairman of the House Transportation Committee, added his support for the bill saying, “It is essential that we do everything we can to provide relief for commuters; these tolls are way too high.”

Former Delegate Rich Anderson also supports this effort, stating that “I represented a Prince William district in the House that arcs between I-95 in the east and I-66 in the west. This is my home and this tolling hurts the community I love dearly. I’m keenly aware that the stratospheric and unprecedented tolls on I-66 completely disregards the will of the people, many of whom are rightfully outraged. I urge my colleagues in the Virginia General Assembly to send to the new governor a slate of proposals that reduces these extravagant tolls to levels that can be afforded by the working families of Virginia.”

Loudoun County Supervisor Ron Meyer said, “We need to make transit a better option, but instead, these tolls simply price people out of their cars and out of employment opportunities. This bill should have strong bipartisan support.”

These Virginia legislators are among nine who signed a letter to Gov. McAuliffe in December, requesting relief on Northern Virginia tolls. More information is available at http://www.votelarock.us/issues/toll_relief

Why skip over the Greenway (I.e., the biggest tax on Loudoun residents going just to feed private corporate profits)?

Just as much as I believe that Representatives should use their professional experience like Delegate LaRock and Senator DeSteph to craft E-Verify (including the 1099) I believe that Transportation Commissioner MS. Valentine should use her position and experience in ending these outrageous fees.
Is 100% of these tolls used on this highway?
You see I will call out job performance on both parties.
Yes, the General Assembly Swamp exist.
Tell Senator Kaine NOT to support immigration reform if it lacks E-Verify.
You may be a supporter of one party but both are working for us, make them do their job or America / Virginia looses. I will not surrender!

I have 1 comment and 1 question. We want more in government services than we are willing to pay for. This is an example. Is this toll rate-structure necessary to maintain this road and to re-pay the investment in the road? If it is, end of discussion.

When you live in a bubble that covers the Swamp expect to breath in swamp gas. That is way to much money to commute to the DC Swamp.
I wonder if the roads that lead us to the Dismal Swamp charge as much?

What percentage of Va transportation spending bills are spent in this area?
Oh well the Goverment is shut down over the NOVA illegal immigrants. You wanted them and you now have them.

Could the Va. revenue spent subsidizing illegal immigration in Va and their Va employers be used in cutting the cost of transportation spending?
To bad Senator Black has not brought forth E-Verify legislation and that legislation should include the 1099.
No tax relief for the NOVA Swamp!
Goverment growth is not Conservative.

We have a ridiculous governor who won’t sign this into legislation. Nice effort but is for naught

rid·i·cule — noun: ridicule
1.
the subjection of someone or something to contemptuous and dismissive language or behavior.

John: How do you see “contemptuous and dismissive language or behavior” with relationship to Dr. Northam?

I’ll concede there are differences of opinion, but ridicule seems inapt to Northam, who seems quite mild in language or behavior.

P.S. I support the legislation mentioned in this piece.