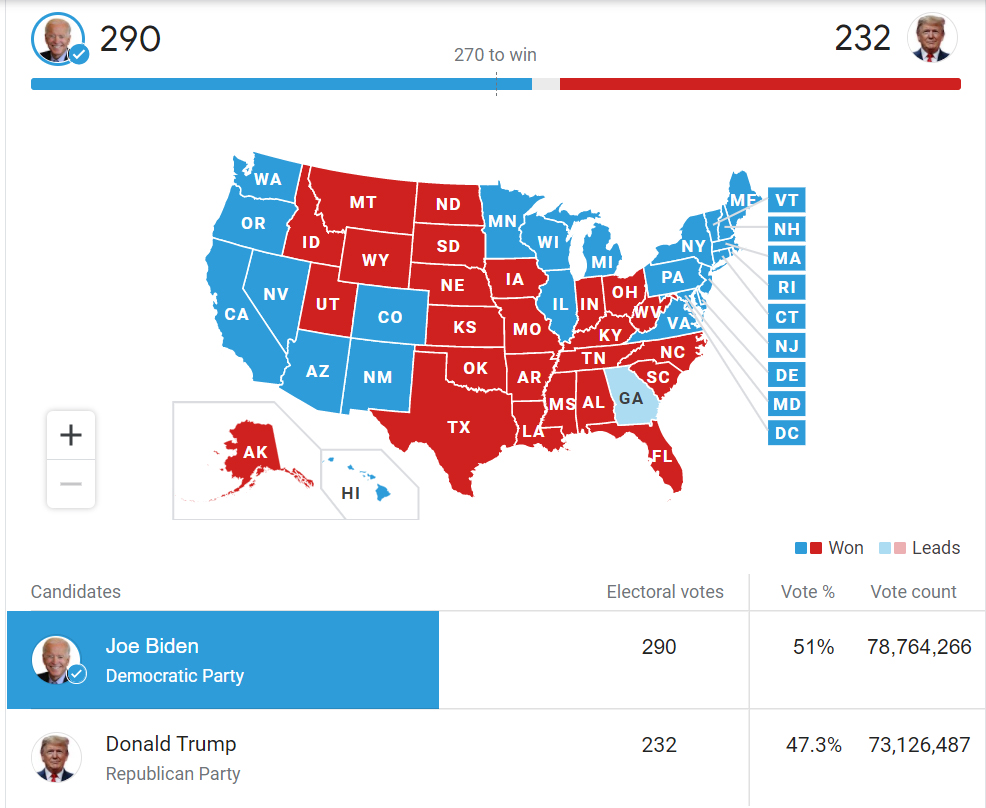 The Trump-Biden electoral college vote and national popular vote, based on news media projections, as it stood Sunday night, Nov. 15

Sadly, Democrats are not likely to go along with it.

Liberals have bitched and moaned about the electoral college since the 2000 election, which George W. Bush won by one electoral vote after carrying Florida in a dispute with democrat Al Gore, but losing the popular vote nationwide by about 3 million votes.

Donald Trump also lost the popular vote by 3 million in 2016 to Hillary Clinton but got 306 electoral votes to get elected president.

Democrat state legislatures adopted politically motivated resolutions this year saying their electors needed to go with the winner of national popular vote â€“ but the U.S. Supreme Court, in a case involving â€œfaithless electorsâ€ who refused to support Hillary Clinton in 2016, ruled electors must vote the way their laws dictate.

In all but two states, Nebraska and Maine, the electoral vote is winner take all.  Democrats controlled the House and Senate from  2007 to 2011 and never put forth a successful constitutional amendment to get rid of the electoral college or reform it.

Now, State Sen. Amanda Chase, who is a leading GOP candidate for governor of Virginia next year, reintroduced some very good legislation to change Â§ 24.2-202 of Virginiaâ€™ state code â€“ so Virginiaâ€™s electors for president and vice president would be proportioned based on which congressional district a presidential candidate wins rather than a winner-take-all system,Â  with two at-large electors going to the candidate who wins the popular vote statewide.Â

Virginia has 13 electoral votes, comprising 11 congressional districts and the two at-large electors allotted to every state plus the District of Columbia.

Chaseâ€™s bill, which failed in Richmond last winter, is outlined in this article.

Had such a system been in place in Virginia this year, Joe Biden would have won 9 electoral votes and Trump 4, as Trump won the vote in the 1st, 5th, 6th and 9th districts.

If other states adopted the Maine-Nebraska system, it would even things out for Republicans – -which is why there is not much chance her bill (a good one) would get adopted by the Democrat-controlled General Assembly in Richmond.

Earlier this year the web site 270towin, which has great maps you can play with to look at different electoral vote scenarios, looked at several proposals for getting away from the winner-take-all system

As you see in the chart below, the proportional route Chase wants, if in effect in all states, would have led to a Mitt Romney winning the presidency in 2012, and a loss of nine electoral votes for Trump in 2016 â€“ though, not enough to cost him the presidency.

A bill similar to Chaseâ€™s to proportion Pennsylvaniaâ€™s 20 electoral votes was introduced by a Republican state senator in Pennsylvania  in 2013, but it died.

I could not find how Biden and Trump fared by congressional district in the key battleground states — Arizona, Nevada, Wisconsin, Pennsylvania and Georgia.  Unlike Virginia, these states do not appear to report presidential victories by U.S. House district.

But judging by how House candidates fared, if the proportional electoral college system Chase proposes was in effect in Georgia, Biden and Trump would split that stateâ€™s 16 electoral votes equally â€“ 8 apiece.

In Nevada, proportional electoral allotting would give five votes to Biden, and one to Trump.

Democrats whine about getting rid of the electoral college, but it would require a change in the Constitution â€“ which is an insurmountable task.

However, each state legislature can change how it allots its electoral votes and adopt the Nebraska and Maine model, at least until a Convention of the States  can be convened to amend the Constitution.

And liberals seem to have no interest in that either.