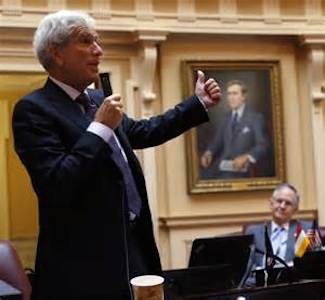 The Washington Post’s Laura Vozzella is reporting that the FBI has approached Virginia Senate Minority Leader Dick Saslaw (D-Fairfax) and informed him that someone wrote 70 unauthorized checks totaling $600,000 from his campaign account for over a year between June 2013 and September 2014.[read_more]

Sen. Saslaw has indicated that from now on he will pay much closer attention to his books and will personally scrutinize every monthly statement.

A review of one of Sen. Saslaw’s amended campaign finance reports reveals the purported recipients of these funds appear to have been two groups with the same address, The Staylle Group and the Federal Legislative Association.

A Google search returns no result for “The Staylle Group” and similar iterations of the name. The address listed for the recipients of the checks is that of David and Lynn Miller in Fairfax. Lynn Miller is, or was, the Braddock District Democratic Co-Chair and is listed on Saslaw’s campaign finance reports as the person authorizing the expenditures mailed to her home address, though the facts do not yet support a conclusion she had responsibility for any embezzlement.

According to Saslaw, no arrests have been made but the FBI “has a suspect and is close to bringing charges.”

I’ll pay “closer attention” in the future seems to be a pretty limp response to well over half a million in unauthorized expenditures and possible embezzled funds vanishing over a year period. That kind of gross negligence and lack of attention to due diligence would seem to require a little more then what sounds like a blow off. Will be interested to hear where the money trail leads.

Lynn Miller’s husband David ran for Fairfax Clerk of the Court in 2007 and his campaign got derailed because he was a fairly shady lobbyist for Scientologists with some interesting personal history. I wouldn’t be surprised if the FBI’s initial investigation involved him, and then they discovered the embezzlement during that investigation.

VPAP is only showing about $300K of the missing money, and it doesn’t appear that SBE has any further data. If there are more checks out there, Saslaw didn’t disclose them on his finance reports.