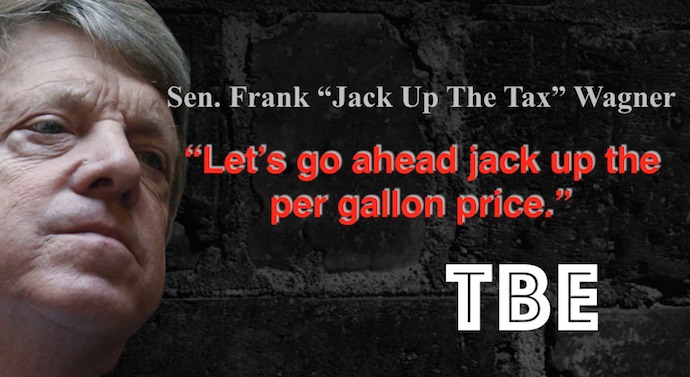 Most people outside of his Virginia Beach home base don’t know much about Sen. Frank Wagner.  Some are learning more about him as his last-place gubernatorial bid garners some modest press coverage.  Others (relatively few when measured against the whole of the primary electorate) know him from the infamy surrounding his slating scandal in 2014.

For those unacquainted with the slating scandal, in 2014 Wagner allied himself and the Virginia Beach establishment machine with the Richmond-based machine of then-Rep. Eric Cantor to try to purge various party apparatuses of pesky outsiders and anti-establishment  types.  Through Cantor’s Young Guns PAC, the two machines organized efforts to take over party committees by employing the odious and exclusionary practice of booting grassroots activists from a local committee’s delegation to its respective district convention. (I’m simplifying…see here and here for more detail).  Wagner did this in service to his own run to become Chairman of the Second Congressional District Republican Committee.  It ultimately failed, while exacerbating intra-party divisions, and alienating huge swathes of his local base and GOP activists from all over the state.

Still others know Frank from his activities in Richmond, where he has a penchant for carrying bills written by his largest non-party donor (i.e., “The bill was originally drafted by Dominion officials, according to its sponsor, Sen. Frank W. Wagner (R-Virginia Beach)”).  He also has a seemingly compulsive tic when it comes to supporting tax increases.  Not only has he introduced tax increase proposals the last two sessions, he brags about his role in crafting the budget deal in 2013 that gave us the largest tax increase in Virginia’s history…the same deal that gave us the MIRC and opened the door to potential Medicaid expansion.

It’s this seemingly endless appetite for more taxpayer money that has earned Sen. Wagner his most recent headlines.  In an interview with the Lynchburg News & Advance, the Senator boldly advocates for an increase in the gasoline tax, a tax that already reaches into Virginians’ wallets to the tune of 16.2 cents for every single gallon of gas we buy.   That tax was set by the Wagner’s 2013 budget deal, which its proponents claimed was historic and far reaching in how it funded needed investments in transportation.  Oddly, Wagner uses the same excuse this time around, claiming the government needs even more money for the problem that was supposedly fixed by Virginia’s largest tax increase just three and a half years ago.

How does he advocate for this rampant reach for your wallet? Thusly:

“Let’s go ahead jack up the per gallon price. Let’s get some roads built.”

Continuously throwing more money at transportation isn’t the right way to address economic growth.  Suggesting that it is will (rightly) not earn Wagner a lot of points among Republican primary voters, particularly after the sense of betrayal many of them endured after the 2013 mess that was supposed to have adequately addressed the problem Wagner has supposedly identified.

But I’ll give him points for this: at least he’s honest, and Virginia’s Republican primary voters know where he stands.  Better that than the alternative of deceptively claiming to be a tax hawk.  So thanks, Frank, for at least being straightforward and transparent.

UPDATE: Shaun Kenney has some similar insights (and equal disdain for the idea) here.  Shaun makes the additional point that Wagner realizes that, like only Nixon could go to China, only a Republican can sell a tax hike.  Which is why we don’t need this particular Republican in the Governor’s Mansion.