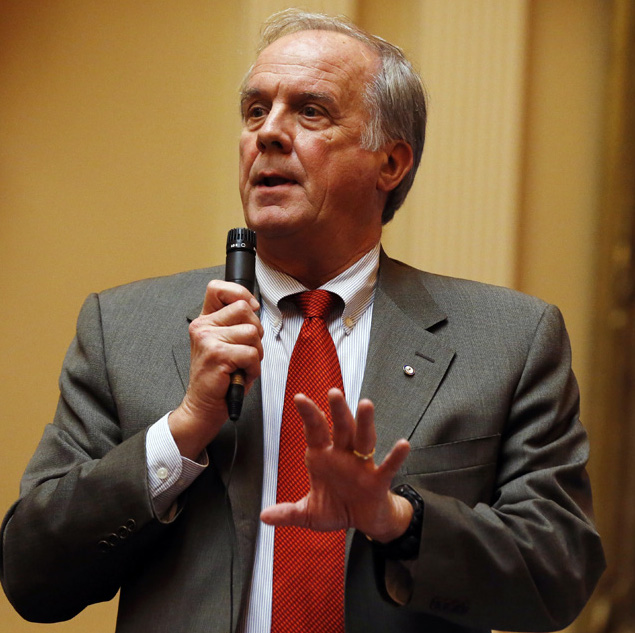 The “moderate” lawmaker, who is frequently part of the “Gang of Three” GOP senators who flip to the Democrats on key issues like Medicaid expansion, will not be missed by conservatives.[read_more]

Our “mother blog” Virginia Virtucon broke the story this morning. (If you haven’t seen the new Virtucon, check it out!) The Times-Dispatch has more here.

Watkins will be stepping down after a stunning 34 years in the General Assembly. Interestingly, Watkins cites the #BLACKorBUST amendment in June that thwarted the attempt to give Governor McAuliffe an avenue to expand Medicaid under Obamacare as one of the reasons for his departure:

Puckett’s resignation opened the door for Republicans to pass an amendment to the state budget that effectively cut off an avenue for Gov. Terry McAuliffe to draw down federal health care dollars to expand Medicaid to 400,000 uninsured Virginia residents.

Watkins and two other centrist Republicans had pushed a privatized version of expansion called Marketplace Virginia, but ended up voting with his party over concerns that the House would fail to pass a spending plan if it allowed for expansion.

“I probably should not have done that,” Watkins said.

“This last session was probably one of the most difficult sessions that I’ve ever been part of, and it convinced me there was life beyond the legislature,” he said. 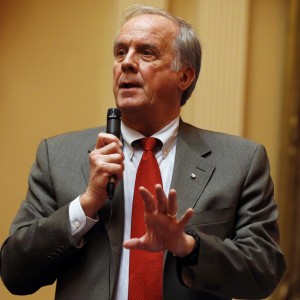 (Emphasis added). Let’s pause on that for a moment. He says he “probably should not have done that” (i.e., vote to keep the Governor from circumventing the legislature and his Republican colleagues). Folks, that attitude—the one that says that backroom deals and and legislative tricks designed to shuck accountability are legitimate behaviors—is at the heart of the problem in Richmond. If Sen. Watkins feels bad for striking a blow for good government, then we feel bad for not having helped reacquaint himself with “life beyond the legislature” any sooner than now.

The race in Watkins’ district is going to be the bellwether for the Virginia senate, as the balance of power may tip in either direction based on the outcome in this swing district. No doubt Watkins has already picked a favored successor, but we have yet to hear any names floated for the job.

Watkins’ colleagues in the “Gang of 3” are Walter Stosch (R-Henrico) and Emmett Hanger (R-Augusta). Hanger has two credible challengers this year, Marshall Pattie and Dan Moxley. We’ve also heard from members of the General Assembly that Hanger’s district may become a test case for litigating the incumbent protection act (Virginia Code 24.2-509), the law that allows incumbents to choose a state-run primary that allows Democrats to participate in Republican nominating contests. That should make for some interesting political theater.

Of course the marquee race this year will be between House Speaker Bill Howell (R-Stafford) and former Stafford Board of Supervisors Chairman Susan Stimpson. I can report (as I have informed the interested parties) that there will be no challenge to the incumbent protection act in Stafford this year, despite rumors to the contrary. Instead, it looks like both candidates are comfortable in making their case to voters in a state-run open primary. That means it’s going to get pretty expensive, pretty quick.

Finally, we are aware of another impending primary challenge. It seems former Dave Brat advisor and Eric Cantor political director Amanda Chase has decided to seek the nomination for the seat held by incumbent Republican Senator Steve Martin. Virtucon has the goods here on what will undoubtedly be a tough contest for both candidates.

I am really excited to see Susan Stimpson take on Howell. She ran an outstanding campaign and it will be an epic battle. Howell has the “Bolling syndrome” where he believes it is HIS seat and is personally offended that one of the “little people” would dare to challenge him and it’s making him crazy. Because he’s being challenged from the right, he’ll probably pretend to be a conservative in the upcoming session. Win – win for voters!

One thing I might add is that it might be beneficial to Stimpson if we tie Speaker HB2313 Howell to “his signature accomplishment” whenever his name is written or spoken.

The largest tax increase in Virginia history, HB 2313, is Speaker HB2313 Howell’s tax, he owns it, and we must give him the credit he deserves for his works.

Now, moving forward, we must also give Speaker HB2313 Howell credit for the “Howell Gasoline Tax” that starts in January. Part of his HB 2313 job killing taxation plan.

I think it would be beneficial if we could somehow get some life size images of Speaker HB2313 Howell to put into filling stations to remind people every time they get gas, that Speaker HB 2313 Howell has his hand in their pocket, and their fuel tank as well!

The only problem is that “they” will just replace Speaker HB 2313 Howell with one of his many Republican, job killing, tax and spend twins in the House.

Speaker HB2313 Howell, I know you will read this, so here is my question. Will you put as much effort into stopping any Gov. McAuliffe tax increase as you did stopping MediCaid expansion?

Or, have you and Gov. McAuliffe finally found something you can “get into bed together” on, in another Republican tax increase?

Stosch will have a top tier primary next year. An annoucment coming next week from a well known person.