Senate Candidates, Other GOP Leaders Speak Out Against Slating

Clearly Third District GOP Chairman Chris Stearns is the individual whose ox is being gored most in the ongoing slating saga undertaken by Rep. Eric Cantor’s YG Virginia organization. It is unsurprising, then, that Stearns is a vocal opponent of the practice. More surprising is that he hasn’t attempted to do the same thing with his opponents’ delegates in counties where he has a clear majority. Why? Both because he believes the practice is wrong, and because he understands that the practice leaves in its wake a wasteland of mistrust and suspicion that makes it impossible for the party to function effectively. In other words, he doesn’t give the other side a taste of their own medicine because he’s actually being a leader, not a slash-and-burn, win at all costs politician.

The internal damage to the party caused by slating (more here for those unfamiliar with the practice) is such that Republican Party of Virginia Chairman Pat Mullins has strongly condemned it: 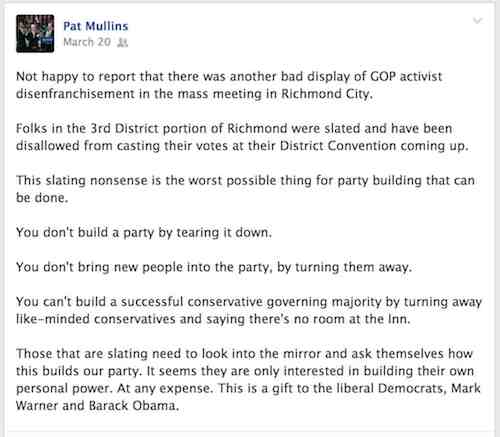 As Jamie wrote, Sen. Bill Stanley, a member of the GOP leadership in the Senate and current Chairman of the 5th Congressional District GOP, was equally forceful is his denunciation:

Although the slating is targeting delegates to district conventions, those delegates often happen to be the same people who signed up to be delegates to the state convention in June where our GOP Senate nominee will be picked. When their party has unfairly kicked them out of their process once, what are the chances they’re going to be enthusiastic about the next convention? For some, the answer is not at all. Hence, both major GOP Senate candidates are also publicly against slating. Shak Hill has said,

Is this how you build a party? Is this the party you want?

We are calling on all Conservatives to unite together and stand against the practice of Washington power politics that has crossed the Potomac into our Commonwealth. This type of bloodletting in our own ranks will further erode our chances at electoral success and rob us of our argument as a Party that stands on principle.

Our campaign has not and will not be engaged or engaging in slating. We know the rules allow for it, but Ed does not believe it is the right approach to getting delegates. The Ed for Senate Campaign is trying to get as many people as possible to attend the state convention in Roanoke on June 7.

Other party officials, including the District Chairmen in all of the affected districts (Linwood Cobb in the 7th, Gary Byler in the 2nd, Chris Stearns in the 3rd, and now Bill Stanley in the 5th), have come out strongly against this party-destroying practice. 10th District Chairman John Whitbeck, whose committee will be running the party canvass to select a nominee to succeed Frank Wolf, is also steadfast against slating, as is 1st District Chairman Eric Herr.

Despite this, staffers of YG Virginia are privately bragging that their deceptive efforts (the kind detailed here) will “crush” the grassroots opposition tonight in Henrico. And that will be a real shame. Some voices will decry the practice of slating, but then give it a free pass simply because the “other side” had a majority (e.g., “Well, it only happened because they were better organized, so I guess turnabout is fair play”).

The problem with that, of course, is there is no fair play at all about any of this.

[…] of voter registration by political party. Cantor and his crew are, for lack of a better word, notorious for supporting Virginia’s state-run open primaries over the convention process favored by […]

This is what happened in the 2nd District, and it will be interesting to see the price State Senator Frank Wagner and 85th District Delegate Scott Taylor take for this “legal” but not right political gamesmanship. IMO, Taylor fancies himself a young gun, maybe in the mode of Eric Cantor, but he may be hitching his wagon to the wrong star. The stench wafting from our Virginia Beach Mass Meeting is going to linger over our area for some time, so long, in fact, that it is certainly likely to affect efforts for electoral success of GOP candidates. Many hope it does…

This is no longer the era of families like the Byrd family of Virginia, running all the political machinery. Yes, of course, I know there is still wheeling and dealing going on, but it can’t be covered up as much, and quite a few more “lay” people are now involved in local politics, as in grassroots, tea parties, and independents.

None of these politicians seem to be asking themselves why we would vote for a non-principled Republican if we’re so against the unprincipled Democrats.

Make no mistake – Cantor’s young guns worked with Linwood cobb and others to insure slating was to happen. The conservative part of the party (yes – The Tea Party) could have slated them right back. What Cantor & Cobb must realize is that we conservatives will do the right thing even when they won’t. However I dare say, should they try slating just one more time, we will pull no punches. We play by the rules, and they had better get in line with those of us who wield the power.

Last night WAS the “one more time”. It’s time to stop pulling punches. They’ve already gone nuclear against us and we would be foolish to ignore the clear and present danger of allowing this practice to continue.

Your right to representation is on the line. Do you value it? Cantor & Co. have made impeccably clear that they want to take it from you.

This really enforces what many of us already knew. Cantor is a political moron (as we have seen in his dealings with the administration). He probably knows his actions infuriate the grass roots, but does he stop and realize this might also infuriate some of the folks that have backed him for years. I don’t think excluded establishment or moderate Republicans are any happier about being cast aside than the rest of us. This good ole boy crap has to stop. Everybody in the party gets hosed unless you are BFF’s with Cantor. What I don’t get is if they have the votes to slate at the mass meetings, they could just as easily get those folks to show up at the district conventions. If YG is bragging about crushing people at mass meetings, then surely they could do it at the district conventions. Why are they afraid of an honest, open, inclusive vote at the district convention? I suspect they either really don’t have the votes or just hate us all together (probably both). I don’t agree with Stearns on a lot of things but I think he deserves to be treated better than this. He deserves a chance to make his case in an honest and open convention. If I were in Cantor’s shoes I would try having an honest and open dialogue with the many voices in the party and listen to their concerns rather than berate them. If he showed some respect to the various voices in the conservative movement he would in turn get respect. Declaring war on your political advesaries within the party is never a good idea. Things always come back to bite you.

I would like to remind those that have been screwed by this that Cantor has a primary opponent. We have almost three months to help that challenger out by volunteering or contributing money.

I have friends in Cantor’s district and they can’t stand him.

I am sure there are many more that feel like your two friends. It would be hard to find two people anywhere that CAN stand him.

The best lesson that could be taught is for Cantor’s challenger to prevail!

“What I don’t get is if they have the votes to slate at the mass
meetings, they could just as easily get those folks to show up at the
district conventions”

I’ll be happy to explain. One of the few qualifications for being a convention delegate is that you have to be in accord with the principles of the Republican Party. The folks being rounded up by Cantor & Co. to outvote the grassroots at these events are reportedly mostly Democrats, and thus they could not be delegates.

They apparently found a loophole, which is that although you need to qualify to be a delegate, there are no qualifications for taking part in the selection of those delegates. They could drag McAuliffe into one of these meetings and he could vote for a delegate slate.

Cantor’s challenger is Dave Brat. He is gonna be great for America. check him out at DaveBratforCongress.com

While I understand your point, you make the assumption the people showing up for them have integrity and honor. The end justifies the means for these folks and they couldn’t care less about being in accord with the principles of the Republican party. As long as they haven’t voted in a Dem primary they can sign up as a delegate and participate fully at any level. Loyalty clauses have no meaning to people that have no loyalty (i.e. YGs). If they are asked to participate once, they come, sign something that is meaningless to them and unenforceable for the present meeting (though they can be restricted from participating in the future) and go their merry way.

To answer my question, they slate because it cuts down the number of heads they have to turn out and it is a block vote of their cronies. A smaller slate is much easier to control and manipulate. That control allows them to more easily select their chair who can alter the rules for the 2016 district conventions (just wait and see, their nefarious deeds are far from over). Their ultimate goal is to concentrate the power in the hands of the bosses and not the people – by any means possible.
I am probably being overly cynical here, but after all these stunts, can anyone blame me for feeling that way.

I completely agree. If the culprit of this disenfranchisement operation is Cantor and his YG machine, the best and most productive way to teach them a lesson is to give them a hell of a fight, and ultimately win! The grassroots should focus on this particular effort, in my view. That will teach them!