Senate Democrats have no heart, they won't fund cancer research for children and they won't open the National Parks

Today the House passed a bill to fund National Institutes of Health, 254 to 171.  That vote included 25 democrats who crossed over to vote with republicans to fund NIH so that childhood cancer and other health research could continue.  The final vote is here.    Senate Leader Harry Reid has said that the Senate will not consider passing the bill.

When Harry Reid was asked by a reporter “But if you can help one child who has cancer, why wouldn’t you do that”?   Reid’s response, “Why would we want to do that”?  The man has no heart.  It’s all about politics for him and the other Senate democrats.

The House has also passed a spending bill that would fund the National Parks, the Memorials, the Smithsonian, and the Holocaust museum.   Twenty three democrats crossed over to vote for that funding.  They should be supported for going against their leader, Nancy Pelosi.  It wasn’t easy for them.  The final vote can be found here. 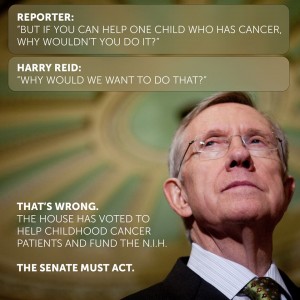