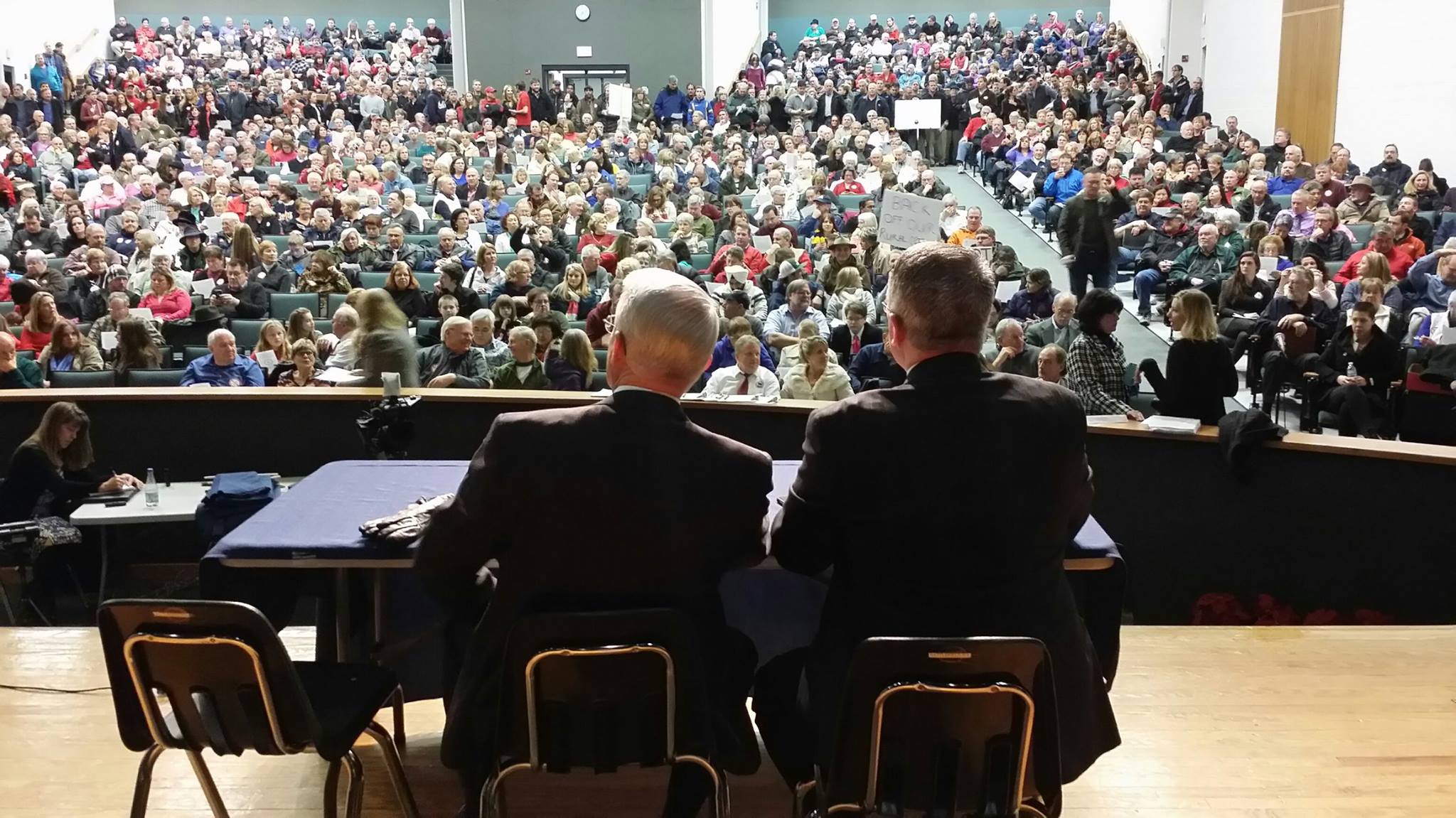 In a hastily organized Town Hall Meeting in Prince William County over a thousand people turned out to hear the plans of Senator Black and Delegate Bob Marshall for the General Assembly legislative session that begins in Richmond on Wednesday. Their previously scheduled meeting had been cancelled because of snow giving them only a few days to organize last night’s meeting. [read_more] This picture says it all, these two representatives are the Rock Stars of the General Assembly.

Dick Black is a huge disappointment. He needs to uphold the constitution and man up to things he knows are wrong. You are elected to uphold the law, so, please do so.

I had the honor of traveling around in 2008 with Dick and Bob on the campaign trail. They are gentlemen to their core, stalwart conservatives and statesmen. Virginia republicans and conservatives, as well as their constituents are well served by both. They both have the unique way of keeping the General Assembly from never having a dull moment and keeping their party on the straight and narrow. God help us if their were a VA House Session without a Bob Marshall to keep Bill Howell and the tax-raising republicans in line.

Serious question: What exactly has Bob Marshall done to keep them in line?

Senator Black and Delegate Marshall are true strong and honorable men fighting for Conservative Principles in the G.A. We’re fortunate to have them there.

My husband, Bob Marshall and Senator Black, worked with Elena Schlossberg of “ProtectPWC.org” to hold a Town Hall for the purpose of bringing citizens together to fight 12 miles of 230 KV huge power lines which would ruin the rural countryside and destroy neighborhoods and property values all to serve one data center customer. The unbuilt data center could move to an industrial location that already has power lines, natural gas, rail and easy access to 66. We are very grateful to the community for turning out, speaking up and we also thank Supervisors Stewart, Candland and Lawson for attending, listening and answering questions.

They didn’t draw the crowd, the subject (power lines) did. Tell the whole story instead of crafting it your way.

Mrs. Marshall has been kind enough to do that for us.

And you didn’t in your original story. Shame on you (yet again).

Now, if Bob Marshall and Dick Black were the main speakers at this event, then I would say “Skeptic” and Bruce are quibbling. When I worked at SAIC (now Leidos) from 1998 to 2008, my former boss, Patti Morrissey, ran against Dick Black when he was representing the 32nd House District. I really liked Patti but she harbored an I-N-T-E-N-S-E dislike against Mr. Black, which is shared among many Democrats throughout the state. On the other hand, to us conservatives 60 and older, Dick Black is a rock star. He is a decorated war veteran and does not back down in the face of intense opposition. I do not know too much about Mr. Marshall, but Dick Black can draw a crowd – regardless of the topic.