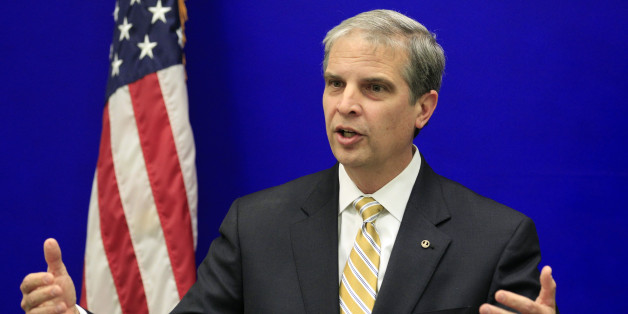 “It is clear that the Governor has overstepped his statutory and constitutional authority by signing this executive action, which automatically restores civil rights to over 200,000 convicted felons.  Democrat and Republican Governors dating back more than 30 years have researched this issue and all have concluded that they do not have the sweeping executive authority the Governor has sought to exercise today. Even Governor Kaine reached this conclusion, which his counsel explained in a detailed letter sent to the ACLU on January 15, 2010. As Governor Kaine’s counsel explained, absent an amendment to the Virginia Constitution, a Governor cannot do what this Governor did today.  This is the kind of unconstitutional executive overreach that we have seen all too often in Washington. We deserve better from a Governor of Virginia.

“While I do support a streamlined process to restore civil rights, the Governor has gone too far. I cannot endorse the Governor’s sweeping and unconstitutional action today.  The Governor restored rights without any regard to the seriousness or violent nature of the crimes committed, whether these individuals have paid their court costs in full, whether they have stayed out of trouble since their release, or most importantly, whether they have paid restitution to the victims.  The action today by the Governor fails to respect victims of crime, the rule of law and is clearly unconstitutional.”

I think we all know why Governor McAuliffe took this unconstitutional action today.   It’s his latest effort to help elect Hillary and it must be stopped.

It’s not like Obenshain would support a constitutional amendment anyway. He’s just being an insensitive d!ck as usual.

So when will Mac man free all those people still held beyond their sentencing, because the legalists deemed to keep them jailed as potential threat to society? They did their time, and who knows, maybe they want to vote too.

The Governor shall have power to remit fines and penalties under such rules and regulations as may be prescribed by law; to grant reprieves and pardons after conviction except when the prosecution has been carried on by the House of Delegates; to remove political disabilities consequent upon conviction for offenses committed prior or subsequent to the adoption of this Constitution; and to commute capital punishment.

He shall communicate to the General Assembly, at each regular session, particulars of every case of fine or penalty remitted, of reprieve or pardon granted, and of punishment commuted, with his reasons for remitting, granting, or commuting the same.

Yes, and this type of aggressive lawfare is one of the best reasons a conservative will choose to support Ted Cruz; no one else on the right side of the political aisle has an understanding of this type of lawfare or a courage — some might say audacity — similar to McAuliffe or Herrring’s to wage it.

Like the VA state senators who waited until the day Henry Marsh was attending Obama’s inauguration and then rammed through a total redistricting package on the 20-19 vote. They knew Bill Bolling would cast the tiebreaker vote against them so they built the trap for that specific day.

Yeah, that kind of audacity. Both sides play that game.

You do notice, Bruce, that that language anticipates and requires the governor to make case by case decisions (“particulars of every case”)? They can and should do something… it remain to be seen if they will.

I did get an email from Rob Bell today saying they would be filing a legal challenge.

“Particulars of every case” can be generated with a database query, with a report can be kicked out in 15 minutes.

Any legal challenge is DOA to the courts and only makes the Republicans filing that challenge like worse. Bell doesn’t need that albatross hanging around his neck when he’s running for Attorney General.

You just gotta love it when someone says one cannot do what somebody has already done. How’s that work?

I suggest Obenshaine stop talking and start filing a lawsuit.

Too many situations like this that are bringing us to be a government of men, not laws.

Maybe Obie can get the AG to look into this.

The AG already said it was OK

Great words… but missing from that statement is any sort of action plan to stop our state level Obama. Are they going to take him to court as they did not do over his abrogation of the constitutional rights of concealed carry permit holders?

until it is declared unconstitutional, the action is constitutional.
Of course, the other way republicans can look at this is as an opportunity to embrace 200,00 more people into their ranks. Also, of course, the GOP is the reason these 200,000 people would vote for Hillary – the GOP holds them in too much disdain. Now, if these felons were all bank executives and white collar, fraud convicts, they would be welcome with open arms into the GOP

And you are wrong (yet again). Things are not constitutional until a court decides otherwise. A thing either comports with the Constitution or it does not. If this executive action does not comport with the Virginia Constitution, then it is unconstitutional. Full stop. Just like robbery is against the law even when the robber is never caught.

Or that a guy is guilty even though not convicted?

by definition, the actions stand as lawful until a court says otherwise. The law does not allow for you uneducated feelings to determine right from wrong

Laws are not quantum in nature, SD… no matter how liberals may wish it to be the case. This action is not like Schrodinger’s cat… it does not have two states depending on what the court says. It either comports with the Constitution or it does not. If it does not, it is a nullity.

here is my question in a nutshell: suppose all 200,000 of these felons show up on election day. & they vote or try to. how will their votes be denied at that point? is it incumbent on the poll worker to say “oh well, that restoration was a nullity”? i bet it stands. nullity or not

You can’t just show up to vote… you have to be registered. It would be up to the registrar to follow the law and the Virginia Constitution (this is assuming that Obenshein is correct that this violate the VA Constitution).

Perhaps the real problem here is that these folks are the ones the GOP does not want to vote no matter their criminal background? The original law was out in place to suppress black voting. Not much has changed

No… the original law was and IS in place because there is a presumption that, just like the right to bear arms, felons lose their right to vote and be on juries.

Interestingly enough, the Governor has done nothing to remove language from regulations that forbid felons from being licensed in all sorts of professions. It seems to me that if you are trying to help felons get back on their feet, allowing them to more easily earn a living would be on the top of your list of things to do.

No, the history behind this law for Virginia is quite racist.

BS… the law is neutral and very similar or identical to laws all around the country. There is a presumption in all these laws that if you cannot refrain from committing serious crimes, you are unfit to take part in the body politic.

As I pointed out already, the Governor is doing nothing on the seemingly more important task of making it easier for felons to earn an honest living after they are released. Nor is he pushing for restoration of their 2nd amendment rights. This is a naked attempt at a vote grab for Hillary and his (and your) cry of racism! is cynical and historically false.

Advocates for the restoration of felon voting rights argue that the restrictions imposed are often rooted in racism, like in Virginia where advocates of the original bill were quoted as saying that the law would “eliminate the darkey as a political factor.”

how will the registrar know? do the registration forms ask the question: felon with civil rights restored?

this is a mess, whether legal or not.

Yes there are questions on the form to determine if someone is eligible to vote… including one about felonies.

well that could be, but unless & until challenged & declared unconstitutional, the Gov’s action will stand.

Not necessarily… executive orders are not legally binding if they contradict the Code of Virginia or Virginia’s Constitution. Executive action is always limited by and subservient to legislative action.

ok, well what is the impact of his executive order? The felons will get their rights restored. or are you saying that his EO violated Code of Va so that when any of these persons registers to vote, the registrar will not allow them to do so? what a mess. as if the entire registration issue aint hot enough.

That is one way it could go… A registrar could refuse to register felons covered in which case it will probably end up in court.

That’s different. So where is the challenge? Where are our legislators challenging that this was unconstitutional? Rather than just whine like a 2yo having a tantrum. Was the tantrum just a show for their constituents? Not enough anymore. Action speaks louder than words.

the question is, will they actually do something to stop this?

Exactly. What lever of power will the Republicans pull to stop this? Deeds, not words.