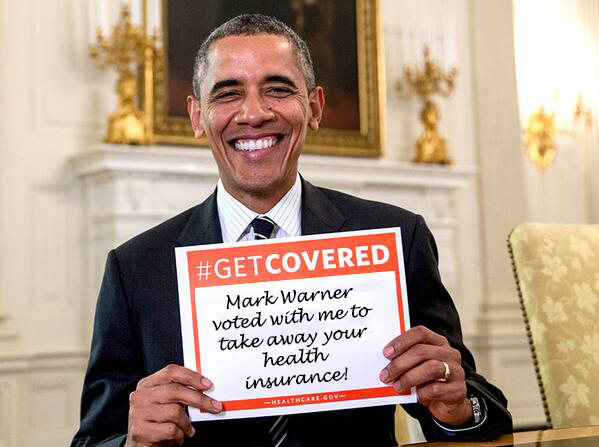 According to this article in the Washington Post, Senator Mark Warner discussed with Senator Puckett possible job offers for his daughter in an effort to dissuade Puckett from resigning from the state Senate and throwing the Senate balance to Republican control.[read_more]

James said that Warner suggested a post for Ketron at CGI, at high-tech firm Warner helped lure to Southwest Virginia when he was governor a decade ago.
“My client, Joseph Puckett, received a phone call from Senator Warner, in which there was discussion of a CGI [ job] or a federal judgeship for the sister,” James said Friday.”

For the first time in years, Senator Warner makes the news, and it’s not in a good way. Federal investigators are questioning everyone involved in Phil Puckett’s resignation including Phil Puckett and his son.  This could be very bad for Mark Warner.  Can you say “Game Changer”?
Stay tuned, there are more shoes to drop.
More here, here, and here.
Senator Mark Warner Discussed Job Offers with Phil Puckett was last modified: December 18th, 2014 by Jeanine Martin

[…] we see that Warner waded back into state-level politics this past June to offer retiring Democrat Senator Phil … in exchange for Puckett’s staying in the Senate, thus keeping that body in Democrat hands. As […]

I want to thank the Bull Elephant for sharing this information. Nothing about this that I could see in the Richmond Times Dispatch this morning – no scrolling breaking news messages on my iPad. A local NBC affiliate ran a piece and it’s starting to show up elseware.

Are you serious? This is a linked article from the Washington Post The BE did not share anything that was not already in the press.

Dear Duh: Perhaps you don’t understand. I read the morning RTD and true to form they didn’t report anything about Senator Warner’s involvement. Just like the fact that the governor’s chief of staff offered Senator Pucket and his daughter jobs has been an open secret for weeks – the story has been all over Richmond but did not appear in the RTD until just a few days ago. My point – The RTD is reluctant to report bad news about democrats – especially Mark Warner and I find myself getting news for other sources. I don’t subscribe to the WP and am therefore grateful for the information wherever found.

Yes, the RTD is a well-know bastion of liberal thought.

Seriously, they aren’t reporting on it because there’s not too much to the story. Dems were trying to get Puckett not to resign. He resigned anyways. Nothing to report on.

Even worse that you rely on this site for “news”. That does not make your case

Yeah because we all know how liberals operate the truth is what they portray it to be ! Liberals lie as well as they breath just look at the liar in chief in the White House. Or should I say the no nothing in the White House if you listen to him he just crawled out from under his rock yesterday !

All politicians lie. It’s a matter of which one you want to believe. Virginia has a two party system. You can pick between dirty tricksters or pickpockets.

When you mention Liberals, are you talking about the ones that gave us the largest tax increase on the middle-class in Virginia history last year, HB 2313? The Liberal Republican “trifecta” of McDonnell, Howell, and Norment?

Or, the Liberals that increased the Virginia budgets from about $75 Billion to about $96 Billion in just 4 years? Same Republican “trifecta” middle-class wrecking crew.

Which Liberals you talkin about????

Oh, and about them liars in the a White House, anybody find them WMD’s in Iraq yet????

just when I dismiss your posts, you come out with something good. thanks for keeping me on my toes

Great time for Gillespie to counter punch Warner with his best shot “the wet noddle”!

“Senator Gillespie, call you office”, the first armored car full of Corporate cash from the lobbyists has arrived!

Thank goodness Puckett knew that the Democrats were so sleazy that he kept the “blue dress!” They immediately lie about it. You know Mark Warner is probably wringing his hands right now wondering if there is also proof of his phone conversation and whether or not he should lie about it. Unlike the bridge they are trying to stretch to make Republicans look bad – this is ACTUALLY illegal. Poor Eric Holder…what does he do now? He can’t prosecute Democrats – he was only after Republicans and anyone who stood against Democrats. My bet is that he drops all the cases and does an “awe shucks – I wasn’t able to bag another Republican like I did with McDonnell.”