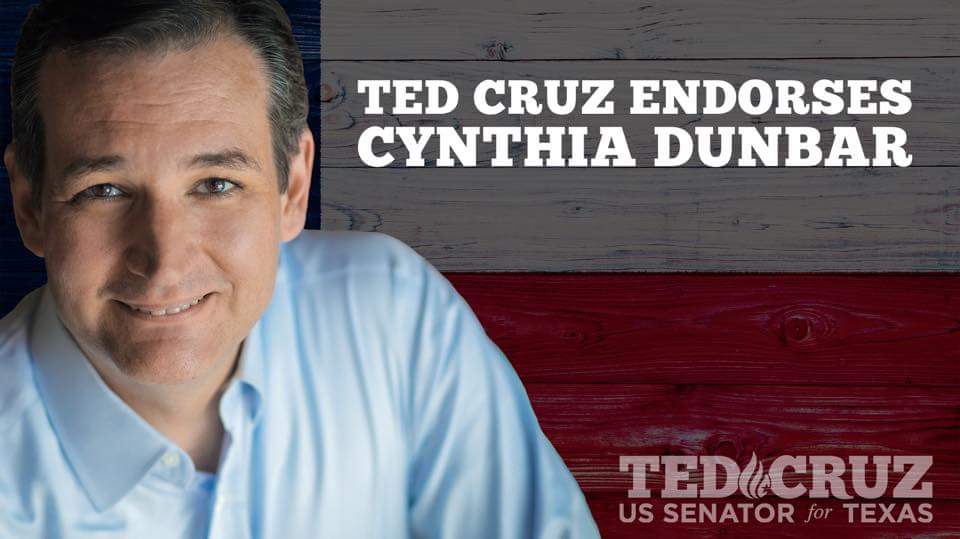 Cynthia Dunbar is a candidate who is shaped by her understanding of the Constitution, and driven by a passion to elevate and preserve our founding principles. She will be a conservative voice and strong advocate for the people of Virginia’s Sixth District. I am proud to offer my endorsement and support for her campaign.

Dunbar is running for the Republican nomination in the 6th district against Delegate Ben Cline and Chaz Haywood who is Clerk of the Court in Harrisonburg-Rockingham Circuit Court.

Texan endorses other Texan in Virginia house race, should come as no surprise.

Democrats (Hillary, Obama, and the DNC) paid Russians (and agents of Russian businesses like Steele) to make up disgusting stories (called “the dossier”) about candidate Trump which they then used to falsely swear out FISA warrants to wiretap Trump and his associates, family, and anyone who interacted with him in direct violation of the 4th Amendment, RICO statutes, and several federal laws against election interference.

The 4 page memo lays out exactly who broke what laws, how, and in what departments, and is a summary of a 99 page memo which supplies more details about the crimes committed by Democrats. It clearly proves that FBI and DOJ Obama holdovers orchestrated and colluded to first ruin Trump’s candidacy, then to use lies to try to destroy President Trump’s administration.

Wild and crazy it is!

I dunno, I think I’m sticking with law enforcement from bottom to top, thinking they stand on a wall to protect us.

When proof arrives, perhaps I will see it your way — and remind you that Republicans were more worried about Trump than Democrats, thinking he was a Dem infiltrating their party.

Until there is proof, I’ll wait and see. Meanwhile, if you have proof, I expect you will offer it and testify against our top law enforcement authorities. Likely it is easy to contact Mueller & Co. to offer help to the investigation.

We will get to the bottom of this. America is a truly great country.

P.S. How is this on topic? How does this bear on Dunbar/Cruz?

More important than just 4 pages of whatever, whoever, wants to believe, is an entire library listed under the title of “youtube” of the trump promises for America. Here are just 2 of trumps of his promises. Interesting that a picture freek like youself shys away from trump factoids……

You could hear a pin drop here about this, and no wonder. Goodlatte is very good, has represented his district well, slugging way above its weight. Excellent committee chairman, smart solution-oriented representative.

Dunbar is tragically flawed in ways that disgrace her party. She makes an issue of her dislike for Thomas Jefferson and his notion of separating church and state. How can that play well in the Sixth?

Further, her policy positions and style belong in a museum. A Texas museum — she’s an ambitious carpetbagger, and those are the kind things you can write about her.

Bottom-line: She’s on the Right, but she’s not right. There are fatal flaws in her background — like attacking Jefferson — that won’t pass without notice in the campaign. I suspect she will consider it a win even if she loses; She wants attention that will not be satiated until she is speaking for the far, far fringe right on CNN. It’s all about her.

I once believed that the Separation of Church and State was to keep the State put of the Church and that was a good thing. Now the power can be exploited by the Church as Churches have become Incorporated. Is the Church now a bussiness? I don’t let people’s religion or their self proclaimed Christianity make my decision in elections for we are all sinners.
I live in the 5th (Lynchburg ) , TJs’ Poplar Forest home is my back yard, I would prefer to keep Jeffersons Constitution as is , his home in Va and religious factions from Governing Free American Citizens.
I love Liberty University but in no way would vote for President Falwell, everyone else running for office can come to Lynchburg to kiss his ring, instead I’ll take the education for my childeren.
Yes Santurary is provided in the 6th District of Immigration Lawyer, Congressman Bob Goodlatte.

Yes, all about herself.
Unfortunately , it is possible when she is finished
Trolling for votes , taking IMO the low road,
The seat may be lost in the general election.

Beware of this loser – he doxxed me

Are you kidding? In what way could Goodlatte be considered “good” or even close to being conservative? This guy has voted to spend money like a drunken sailor. He has had these “aides” or other staff CONSISTENTLY show up in communities to discuss constituents “issues” with the stinking overbloated Federal Government.
He has allowed Harrisonburg to rise to a poverty rate of 30+ percent, according to the 2015 Census. The number of illegals has exploded over the last two years. What has he done to defend the border? ZERO. All of these candidates, especially Cline and Haywood, will need to be questioned to verify if one of them take the oath to uphold the U. S. Constitution, by God, they will make darn sure they mean it. These bs establishment types have turned out to be huge liars.