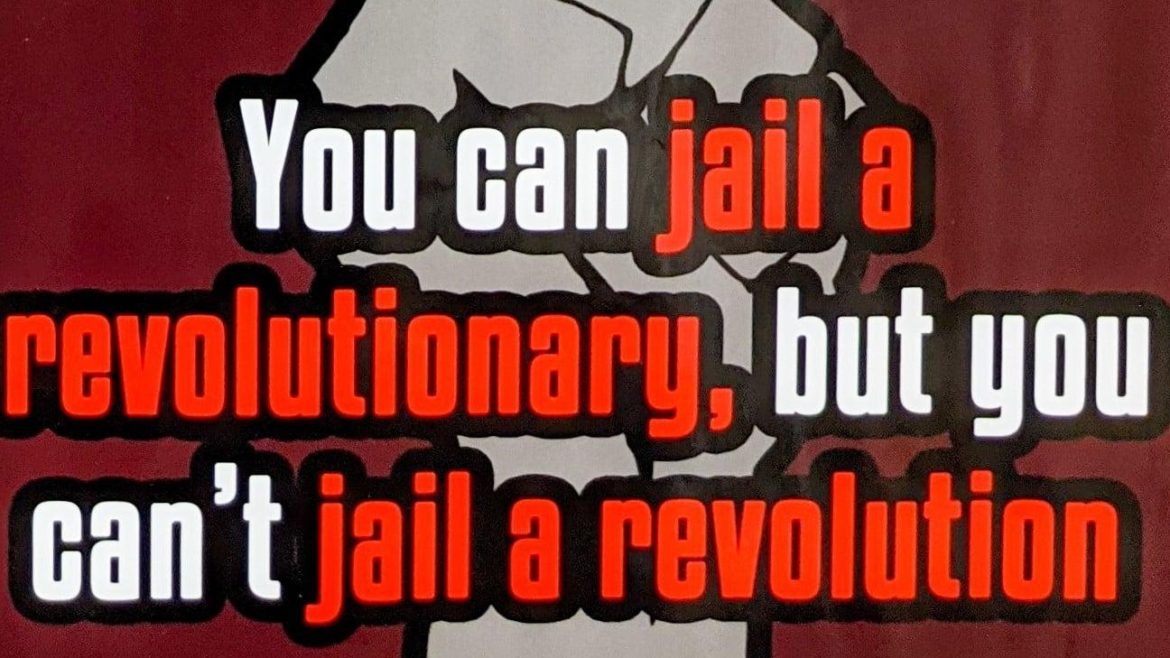 By now, most of us have probably lost count of stories about various culture wars being waged in our nation’s public schools.

Whether it’s footage of school boards mired in debates over the use of “critical theory” (as seen here, here, and here)… or battles over “gender ideology” (here, here, and here)… or a teacher caught boasting of his designs to convert students into “revolutionaries”… it’s easy to be left exhausted, with a sense of outrage fatigue. For me, however, these abstractions have become very real.

I recently attended “Middle School Orientation Day” with my 11-year-old son – and we saw divisive, ideologically-charged signs everywhere. Yes, these signs are real. And yes, I took these photos with my own phone.

Arlington, Virginia’s Swanson Middle School is adorned with images of raised fists, along with “revolutionary” messages. Many signs feature the names of highly ideological, left-wing organizations.

The sign’s image of a raised fist, often associated with communism, led me to infer the “revolutionary” quote wasn’t a reference to America’s founding. And sure enough, the words are generally attributed to Fred Hampton – a self-identified Marxist-Leninist.

At orientation day, Swanson’s equity coordinator was handing out leaflets for BoyzIIMen, a school club devoted to “current events as they relate to race, ethnicity, religion, LGBTQIA+, and intersectionality.”

Judging by the hallway signage, “gender” and “sexuality” are dominant themes at Swanson Middle School (whose students are generally below the age of consent for sexual acts/relations in Virginia). What about families who disagree with the school administration’s values regarding gender and sexuality – or just want to have a little more control over when and how these delicate issues are introduced and discussed with their own kids?

Towards the end of our tour, we saw a large banner with hand-written advice for new students. In addition to “LGBTQ+” and “puberty” references, nuggets of wisdom included “math is hard” and “procrastinating works.” The sagest advice, however, might have been “try not to die inside.”

You may be reading this story as just another outrage, in a far-away school district. Or maybe the “woke” Left’s reductive, identity-obsessed view of human nature bores you, and you’d rather focus on bigger things. I was in your shoes, until just now. You might not want a culture war, but that doesn’t mean it won’t be coming for you.

Nathan Brinkman is the father of two school-aged kids. He lives in Arlington, Virginia, where he owns and manages Brinkman Media, a general consulting firm.

Gay straight alliance has existed in schools for decades. You’re just a homophobe.

And you are a pervert.

Why subject your son to this abuse?

America LOVES Democrats, chooses Democrats regularly against Republican opposition, even in Arizona. ESPECIALLY in Arizona. And the Commonwealth of VIRGINIA. Lots of Republicans here on TBE (Joker) will tell you just that — pay attention!

Full blown indoctrination to create an entire generation of malcontents mentally abused by the school system.
Talk to any psychiatrist or psychologist, this environment will energize lots of mass shooters as they get older.