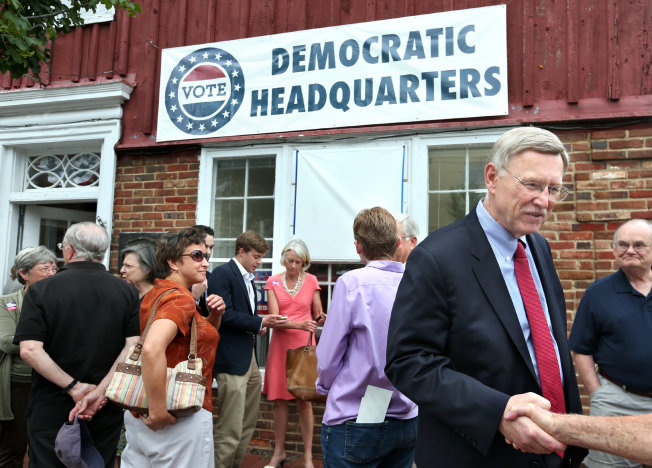 Sexist 10th District Democrats–Comstock Is Only Winning Because She’s A Woman! 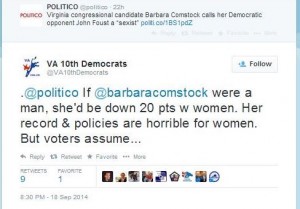 Wow.  Women in the 10th district are responding  to this disgusting, sexist, comment, and the earlier sexist remarks made by their candidate, including the following letter from Julie Williams, Vice Chair of Virginia’s 10th District Republican Committee,

The 10th District Democrat’s sexist attacks on Barbara Comstock and women in general persist with her challenger John Foust’s false, insensitive, and politically motivated comments that Barbara has “never even had a real job.” Women like me in the 10th District have waited for almost two months for Mr. Foust to do the honorable thing and acknowledge the inaccuracy of his statement as it pertains to Barbra Comstock and the distasteful stereotype it propagates. We are owed an apology and Virginians should condemn sexist remarks like these.

Yesterday, the Comstock campaign launched a new ad hitting back on Barbara’s opponent for his misleading, sexist remarks, and highlighting Barbara’s positive record as a legislator.

Barbara Comstock is winning this race because she is the only candidate who has a proven record of creating jobs, growing the economy, and writing legislation that improves the quality of life for all Virginians, including cracking down on human trafficking. Barbara Comstock is a compassionate principled leader who gets results.

Sexist 10th District Democrats–Comstock Is Only Winning Because She’s A Woman! was last modified: September 20th, 2014 by Jeanine Martin

Sorry, slightly off topic but where are the polls on this race (other then internal non verified campaign canvassing)? I’ve been able to locate little to nothing on a race the Dems claim they are all in on. You would think with less then 50 days out from election the major polling shops would be giving this race some attention. I think this race may be a whole lot closer then many are anticipating.

I haven’t seen any polling done on this race, and I wouldn’t be surprised if it end up being close in the end. Pretty much all of the major race “handicappers,” including sources like Cook, Sabato’s Crystal Ball et. al. have this race as “Leans Republican,” which I think would be a GOP win by 5% or less (give or take). I have seen no movement either way on this race since the get-go, and these sources have updated their lists recently and VA-10 remains unchanged. Of course, we’re still a month and a half out, lots of things can happen, and a forecast is by no means a guarantee of a win. However, Comstock has been and currently remains the favorite to win in November.

Thanks for the response. I reside in the 10th and from just impressions seem to see little enthusiasm in Comstock’s candidacy, not any outright opposition but just a general sense of “ho hum”. Her constant refrain of how she worked for Frank Wolf and how strongly he supports her may not work to the benefit she seems to believe. We had Frank for 33 years and many are looking for something different not his coattails. She just hasn’t cut out her own space as a candidate. If +/_ 5% is anywhere near reality I think its conceivable she could lose this to Foust. It will be all about conservative base turnout and I’m not convinced she has closed the deal in that area.

We will have to see. I live in the 10th as well and I’ve spoken with a couple of Comstock’s canvassers and I have indicated my intention to vote for her. No one from Foust’s campaign has come to my door, although I have gotten hammered with mailings from his campaign and the VA Dems. To be honest, some have been touting Foust in a positive way….most recently they have just been anti-Comstock (she support this, she wants to ban that, etc.) I agree that it will boil down to turnout and while it will most likely be close I would still give her an edge at this time. She did very well in the first debate (with another one coming up this week) and her team has been working the events pretty hard from what I can gather (perhaps someone more involved in the campaign can chime in on that). In terms of yard signs and bumper stickers, I have seen several yard signs for Comstock, only one for Foust — bumper stickers have been roughly even. One final note, in the 2013 H of D’s election, per the VPAP website, Comstock performed best in the Dranesville area, which is Foust’s home turf in Fairfax, as I recall.

I’ll mention a couple other things. First, GOP turnout/enthusiasm is anticipated to be higher this election cycle. Assuming that is ultimately the case, that would favor Comstock. Additionally, the Special Election held earlier this year in FL-13 was won after the passing of an incumbent who had served for decades. The victor (who wasn’t exactly the strongest candidate in the world) used to work for that particular Member of Congress and the seat was even more marginal than VA-10 is. Despite this, and the forecasters anticipating a victory by the much stronger Democrat candidate, the GOP won by about 2% (roughly 4,000 popular votes). Again, the assumption is that turnout and the political winds are comparable in November, but assuming things stay as they are, I would still give the edge to Comstock, especially since her power base is also in Fairfax County. Remain competitive in Fairfax and Loudoun, and win solid majorities in the rest of the district and you win the election.

Documentary film footage of ol’ Panky back in the day …

Justify this outrage against the fact that women will still vote for Foust, please?

Perhaps those who do so are thinking with their lady parts? Just a guess. I hear some men have been known to think with their man parts.