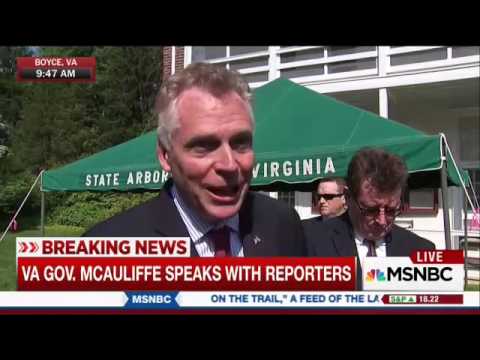 As CNN reported Monday, the Justice Department and FBI are investigating $120,000 in donations to Terry McAuliffe’s gubernatorial campaign in 2013, as well as questions surrounding McAuliffe’s personal finances and potential foreign sources of income. The investigation is said to arise from the Bureau’s examination of the Governor’s time with the Clinton Global Initiative, a subsidiary organization of the Clinton Foundation, which has received millions of dollars from foreign governments and other foreign donors, much of it while Hillary Clinton served as Secretary of State.

THE BILLIONAIRE BACKGROUND
The $120,000 in donations to McAuliffe came from a company called West Legend Corporation. According to the Virginia Public Access Project, there were two donations directly to McAuliffe’s campaign, totaling $70,000: one for $10,000 on March 27, 2013, and another for $60,000 on September 9, 2013.  West Legend Corporation then made a $50,000 donation to the McAuliffe inaugural committee on November 21, 2013, after the Governor’s election.

So what is West Legend Corporation?  It is one of the shady companies serving the U.S. interests of its owner, Wang Wenliang, a Chinese businessman.  Mr. Wang also owns Rilin Enterprises, a Hong Kong-based company through which Wang has won contracts from the Chinese government to build their embassies in a number of locations, including the Chinese embassy in Washington.  As many readers know, especially those with national security backgrounds, not just anyone can build a country’s embassy.  Because of the opportunity for espionage is so great (think of sophisticated and difficult to detect surveillance equipment built into the building), a country chooses its embassy builders very carefully, and only uses trusted contractors and direct employees.

And then there’s this:

[I]n a 2011 raid, Jersey City police and inspectors found about 30 Rilin workers living in two cramped houses, according to the Jersey Journal. The New York Times, reporting last year on the purchase of expensive New York real estate by shell companies, including one created by Wang, said the inspectors found a similar situation in 2013 and that the Rilin workers were working for the Chinese Embassy.

Importantly for the potential legal action against him and McAuliffe, Wang was also very likely a member of the Communist Chinese National People’s Congress, the highest legislative body in China, at the time of one or more of the donations. (Although most media outlets have suggested he is now a former member of this undoubtedly august body, a spokesman for Rilin told CBS News last year that Wang became a member of the NPC in 2013. Members in the NPC serve five-year terms.  It is possible he has since resigned or been removed, but we have found no confirmation of that).

INTERSECTION OF CHINESE BUSINESS WITH AMERICAN POLITICS
Business has been good to Wang, whom Forbes indicates is worth over $1 billion.  Part of that business has a Virginia nexus, too, beginning with a relationship Wang cultivated with the administration of Bob McDonnell to negotiate importation into China of Virginia-grown soybeans, via a port facility owned by Wang in Dandong, near the North Korea border. 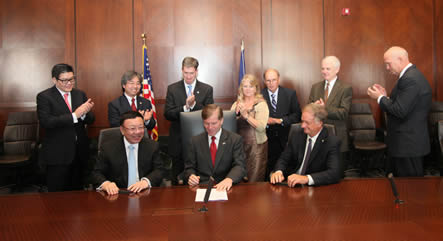 McDonnell inks the original soybean deal with Wang in 2011, which was renewed and expanded in June 2013

McAuliffe told reporters yesterday and again this morning that he’d never met Wang, despite the huge donation.  Here’s where it gets really interesting: the McGuire Woods connection.

In addition to lavishing contributions on the Clinton Foundation and Terry McAuliffe, Wang has tended to his interests via a significant lobbying effort.  Records show that entities controlled by Wang hired the Richmond-based lobbying firm of McGuire Woods Consulting beginning as early as 2012 for federal lobbying activities.  In its required disclosures, McGuire Woods says that its activities related to “trade and business development” activities with the House of Representatives and Senate, and to assisting with securing “selected visas for visitors to U.S.” via lobbying activities at the State Department.  Between January 2012 and early 2015, Wang’s Dandong Port Company paid McGuire Woods Consulting over $1.4 million for such services.

As has been widely reported, Wang’s Rilin Enterprises also pledged $2 million to the Clinton Foundation in 2013, when Clinton pal Terry McAuliffe was running for Governor of Virginia and Wang’s Dondang Port company was negotiating its Virginia deal with the McDonnell administration.  According to former South Carolina Governor Jim Hodges, who is now a lobbyist with McGuire Woods, the firm was instrumental in helping Wang get the deal done, at the same time they were helping Wang to ingratiate himself with McAuliffe.  Although the Governor denies knowing or ever having met Wang,  Hodges tells another story:

[Hodges] said that his firm, McGuireWoods Consulting, introduced Wang to “then-private citizen Terry McAuliffe” shortly after a soybean deal was closed between the commonwealth of Virginia and Dandong.

VPAP contains no record of McGuire Woods disclosing any lobbying work in Virginia during this time period, likely because neither the soybean deal nor the introduction of Wang to future-Governor McAuliffe would have qualified as a lobbying activity under Virginia’s fairly lax disclosure requirements.   What VPAP does show, however, is that Wang’s company West Legend made its first donation to McAuliffe of $10,000 on the same day (March 27, 2013) that the McGuire Woods State PAC made a $5,000 donation to McAuliffe.

SO WHAT”S THE BIG DEAL?
Aside from the tawdriness of it all, with big foreign money buying (at least) access to senior U.S. and Virginia officials without any real oversight and only minimal public disclosure, the question about this episode comes down to, “Did Terry McAuliffe break any laws?”

McAuliffe has maintained that the donations he accepted were lawful, in that they comply with Virginia’s disclosure requirements and don’t run afoul of federal prohibitions on donations from foreign nationals.  Here, McAuliffe cites Wang’s seven years as a lawful permanent resident of the United States (i.e., he has a green card).  This likely is also the reason the McGuire Woods federal lobbying disclosure reports have all certified that the Wang-related entities listed as their client (or as exerting control or influence over their client) are not “foreign entities” under the Lobbying Disclosure Act of 1995.

But, there is a reason the Department of Justice and the FBI are investigating McAuliffe for these donations, and for other aspects of his personal finances. They don’t undertake such investigations lightly.

In our next post on this subject, we’ll explore how Wang Wenliang’s green card might not be the “Get out of Jail Free” card that McAuliffe thinks it is under the three principal federal statutes that would apply to this conduct.