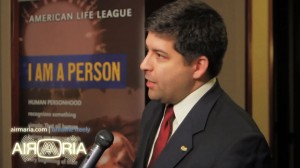 Shaun Kenney has an extensive background in the party, having served as communications directer for Ed Gillespie when Gillespie was RPV Chairman.  In 2010, Kenney  became Executive Director of American Life League, the nation’s largest grassroots Catholic pro life group. In 2009, Kenney was elected to the Fluvanna County Board of Supervisors and was later elected chairman.   Shaun is the founder K6 Consulting LLC, a political  and communication consulting firm.  He is perhaps best known for his outspoken commentary on the popular Virginia blog, Bearingdrift.com.  He lives with his wife and seven children in Kents Store, Virginia.

Shaun Kenney clearly has the background and experience to tackle this difficult assignment. We at the Bull Elephant wish him the best of luck!!

Shaun Kenney shouldn’t be allowed to serve in this capacity. He’s a RINO and a “chickensh*t”.

He certainly hasn’t covered himself in glory during his week in office. A long time, controversial, blogger with his opinions readily available on internet may not have been the party’s best choice.

Shaun Kenney is one of the reasons I have stopped contributing to the republican party. Calling people names isn’t going to get republican votes either. I hope a 3rd party springs up.

Bad news for Virginians. Good news for Crony Capitalists. Shaun Kenney is a highly rewarded lackey of the open borders, cheap labor cabal. His allegiance is to the National Chamber of Commerce. The Chamber wants amnesty. Shaun Kenney will provide the smokescreen of phony moralism and high minded sanctimonious cant to protect Amnesty pushers like Eric Cantor and Ed Gillespie. No true patriot will pay any attention to this over paid buffoon.

Please see my latest post. It confirms what you have said.

This should help to make Shaun’s job somewhat easier: http://www.politico.com/story/2014/04/supreme-court-campaign-donations-limit-105284.html

Good luck, Sean! You’ve got a big task ahead of you. I have high hopes that you can restore/fix the missing professionalism in the state organization.

If you need a hand repairing that awful RPV website, you have my email address!

The website is only part of it…I understand that the RPV went with i360 as its voter/precinct/election database system…which doesn’t even have an election day organization module/function. They essentially just made a gut decision, instead of closely scrutinizing the various offerings and picking the best one. Sad.

Oh my. This is one of our biggest problems with contacting voters and getting out the vote. I hope they have not chosen poorly, again. We keep wasting money on crummy systems. I hope that Shaun can change that.

It’s going to take some repair work to get money from the “little people” considering what the Establishment GOP has been trying to do, ie. slating and the disenfranchisement of the grassroots level of the party.

[…] The speculation that our own Shaun Kenney is heading off to become the new executive director of the Republican Party of Virginia is true. […]

[…] Martin of the Bull Elephant broke the news early this morning, and members of the State Central Committee were made aware of […]