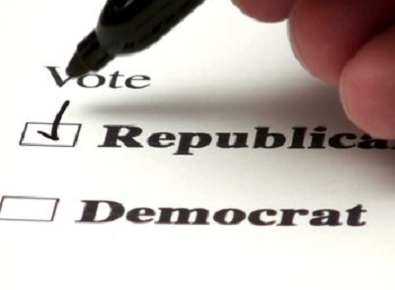 Republicans in the Virginia Senate certainly think so. The GOP majority on the Senate Privileges and Elections Committee earlier today passed such a measure on a strictly party line vote of 8-to-7. [read_more]

The measure, offered by Sen. Mark Obenshain (R-Harrisonburg), would add party affiliation to the information requested of voters, who would be allowed to register as independent if they do not choose one of the qualified political parties (which, going forward, would be any party with at least 15% of registered voters, an awfully high bar for the Libertarian Party or any others). It would take effect in advance of any primary contests in 2016. A companion measure in the House of Delegates has been introduced by Del. Steve Landes (R-Augusta).

Passage of party registration does have the potential to eliminate the kinds of intraparty strife the GOP has seen in recent years, much of which centers on importation of Democrats and other non-Republicans into GOP contests (be they high-profile primary elections, or small-scale local canvasses or mass meetings). Party registration would provide an objective bright line measure of whether the person belongs to the Party. Yet, reservations remain among many rank and file Republicans who have philosophical objections to the state having a registry reflecting individuals’ political beliefs, and among others who suspect (not without good reason, I might add) that party registration is simply allowing the camel’s nose under the tent (i.e., the first step to government regulation of political association and speech).

Democrats have little reason to favor party registration, so it is unclear what the chances either of these bills have of becoming law. Democrats do not face the same dilemma as Republicans, who in most locales across the Commonwealth constitute the only political game in town, and thus attractive targets for people who do not feel constrained by such requirements as actually having to be a member of the party to vote in its elections. Conventional wisdom says that, if Republicans really want it, the Governor won’t sign it unless there has been a deal made for Republican support of some other priority of the Governor’s. Legislative sources have suggested to The Bull Elephant that the Governor is expected to veto any party registration measure that reaches his desk.

Trust me when I say this, YES! It’s a good thing. I lived in NC for 9 years and was secretary of my county GOP for 2 terms. As secretary I ran the credentialing for the annual county convention which is every March in NC. Delegates HAD to be a registered R by 1/31 of that year or they were not seated. GOTV was easy because we could target Republicans. (I made calls this past election season at the Fredericksburg headquarters and had to call democrats who were rude). The entire structure of the election process is more organized in NC than in VA and way easier. VA takes 1000 steps to accomplish what NC can do in 10 steps. Compare the makeup of the governor, lt governor, General Assembly and US Senate from the 2 states and then get back to me. And there is ONE primary day in the spring for all elections. Anyone who thinks that VA should keep the status quo of an antiquated system is either employing wishful thinking, is willfully ignorant or is a closet democrat.

Absolutely! This would allow us to hold closed primaries where only registered Republicans would be allowed to vote. This could end the whole “primaries vs conventions” argument.

Thirty-one other states and the District of Columbia allow registration by party. This should be a no-brainer.

It works. Get it done.

The 21st century is clearly seated in the age of mass electronic communication and issue driven voter mobilization where the political party system is looking more and more like a creaky, aging anachronism that is generally focused solely on gaining more power than other groups to the detriment of the whole. Even George Washington viewed political parties as potentially destructive because of the temptation to manifest and retain power, and often to seek to extract revenge on political opponents. All you need to do is look at any given public poll on the US voter’s opinion of the existing political parties to see the facts. So given the inextricable, accelerating and evolving trend of mass communication is a policy to round up all the wandering sheep place them in a pen labeled “Republican” and declare we have “our” party back a winning strategy or a classic case of hubris on an organizational scale? When you can’t see the problems its doubtful you will find an answer. But tinker away time is not on the parties side.

Why on earth would anyone support giving more power over our political processes to party organelles?

The system was perfectly functional until Ken Cuccinelli and the grassroots bucked the powers that be and got, and won, a convention. Conventions make candidates too conservative, they say.

Thus, conventions must go… Under the guise of ‘fairness.’

Linwood Cobbs loss was not a forebarer of anything, it was just a bunch of idiot hicks from Hanover causing ‘main street’ republicans to lose to extreme fringe conservatives. SEE! Conventions are the problem.

But then Shak Hill lost to an establishment, mainstream candidate. Phew. Thank goodness, because there is NO way a more conservative, grassroots oriented candidate can even come close statewide (cough cough what happened to Cuccinelli? -Shut it!)

Ok fine, well at least Cantor doesn’t have to put up with a risky convention and can just sail through a primary.

Well at least we know that Dave Brat will only win by a little, certainly less than Cantor had been winning his seat by in generals.

Wrong. The fact of the matter is the establishment wants control of THEIR party. They have tried to drive home their narrative over and over, and it keeps getting blown up in their faces. Conventions do not automatically favor the more conservative candidate, nor do they automatically nominate the less electable candidate.

And because the sacred cow, the precious primary, has since proven to not be reliable, they must push for party registration.

Why? Well, ‘keep it small, keep it all’ is the refrain of the brain trust beind the VCN, is it not?

These folks do not see adherence to principle as the utmost ideal. No, instead they are devoted to the party. They seek to promote the party above principle under the guise of winning, being a good team player, doing their civic duty. It’s about their team winning.

But what’s more important than their team winning? Making sure their people make up the team.

The data prove overwhelmingly that there were NOT 14,000 democrats who voted for Brat in the primary. That is an hysterical lie from a consultant and pollster who got humiliated. Perhaps, PERHAPS 3000 Dems voted according to i360 data. Assuming they all voted for Brat, which is a HUGE assumption not based in data, Brat still wins by 7-8%.

And guess what, Dave Brat not only outpaced Cantor’s recent electoral results, he outpaced the Statewide candidate by a non-insignificant margin.

That obvious ‘something else’ is what was barred from hearing Mr, Cantor’s speech on winning elections – the grassroots.

They cannot control us, and they have lost the handle on the nominating process, thus they must change the game.

Party registration is a thinly veiled attempt to wrest political power away from the individuals (the grassroots) and give it to artificially powers party organelles. We must resist or we risk losing a piece of our political power and having to engage on terrain not of our choosing. Political parties are a huge problem in our country as a whole (as Washington so safely warned), and giving them more power, data, and control here in the Commonwealth is enabling those institutions.

Absolutely! Getting too old to knock on doors of those who have voted in primaries only to be told, “we’re Democrats” or “we vote in NC where we have a home” or more egregious, “we’re not citizens”. Either your walk lists truly suck or you WANT the Democrats to steal elections!