Showdown on the Shutdown

A government shutdown fight over a Continuing Resolution is child’s play compared to what happens if the federal government doesn’t raise the debt ceiling. That time bomb is ticking, but Republicans have a real chance to walk away with a win for the American people.

Some observations on this first day of the government shutdown, following the failure of Senate Democrats and the President to compromise with House Republicans on aspects of Obamacare.

But how will it all play out?

The key factor to consider in how this crisis will be resolved is what happens when the government literally runs out of other people’s money to spend. Right now, despite not having a Continuing Resolution to fund everyday activities of government, mandatory spending continues unabated. That changes on October 17, when we reach the authorized debt limit and the government’s ability to continue to borrow expires. No one is quite sure what happens then, because Congress and the President have never failed to raise the debt limit in the past. But one thing is certain: more than just “non-essential” functions would be implicated if the government is not authorized to continue to borrow and spend. Given the proportion of the federal budget that relies on debt spending, the consequences could be catastrophic, depending on how well the remaining “unborrowed” tax revenues are allocated.

Republicans have suggested that they will continue to use all available legislative tools, including by refusing to authorize continued borrowing, to stop Obamacare.

I don’t pretend to have a crystal ball that tells me exactly how this is all going to work itself out.  I know that, given the timing, resolutions of the debt ceiling crisis and the government shutdown seem likely to eventually be rolled into a single package. That is, unless Republicans cave early on the government shutdown. Republicans with less intestinal fortitude than has been shown by the House leadership will be screaming, “I told you so” about all of the bad press Republicans will be getting.  They will play as Obama’s/Reid’s/Pelosi’s useful idiots in painting the House GOP as dominated by “extremists” and the “Tea Party,” and will be the loudest voices counseling unconditional surrender and to do “the responsible thing” and put the government back to work.  Obama understands this, and will not feel any pressure to negotiate so long as those weak sisters within the Republican party are serving his purposes.  To this end, most of Obama’s and other Democrat leaders’ statements in the coming days will be designed to exacerbate any perceived split within the House GOP caucus.  One does not need powers of premonition to see this coming. 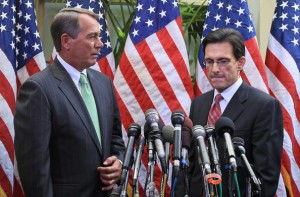 Republicans have narrowed their demands on Obamacare to just two: delaying the individual mandate for one year, just as Obama did for big businesses by executive fiat; and requiring Members of Congress and their staff to enroll in Obamacare exchanges like ordinary Americans, instead of being exempted or provided special subsidies.  If Boehner, Cantor, and sympathetic GOP Senators can marshal the message of fairness, and do a good enough job of making it clear to the American people that simply requiring Congress to live by the laws it enacts is all that is required to end these crises, the GOP has a chance to walk away with a clean win.  They won’t be able to do that unless they stay strong and united for the long haul, as Obama and the Democrats won’t give that ground unless they’re forced to.

Given the tremendous loss of face that a delay in the individual mandate would pose for the President, and the financial and logistical nightmare of implementing Obamacare without it, I think it is highly unlikely that any amount of pressure would be sufficient to get the Democrats in the Senate to compromise on that. But special exemptions and privileges for Congress under Obamacare seems indefensible. If Republicans keep the spine they’ve shown over the last 10 days, then victory will be within their grasp.

Republican leaders on Capitol Hill with whom I’ve spoken frankly concede that defunding Obamacare, or even delaying the individual mandate for a year, is likely not possible given the present makeup of the Senate. What they have their eyes on most, though, is making Obamacare the central campaign issue of the 2014 midterm elections, particularly for red state Democrats like Manchin and Landrieu.

Democrat talking heads have been squawking loudly about how the GOP is trying to up-end the legislative process, and that “elections have consequences.” What they’re gliding over is that the 2010 and 2012 elections gave Republicans a majority in the House, largely arising from opposition to Obamacare. This situation is a direct consequence of those elections, and will in turn have a direct impact on the next one. It looks like Congressional Republicans have found a winning strategy.

Showdown on the Shutdown was last modified: October 1st, 2013 by Chad Ochocinco