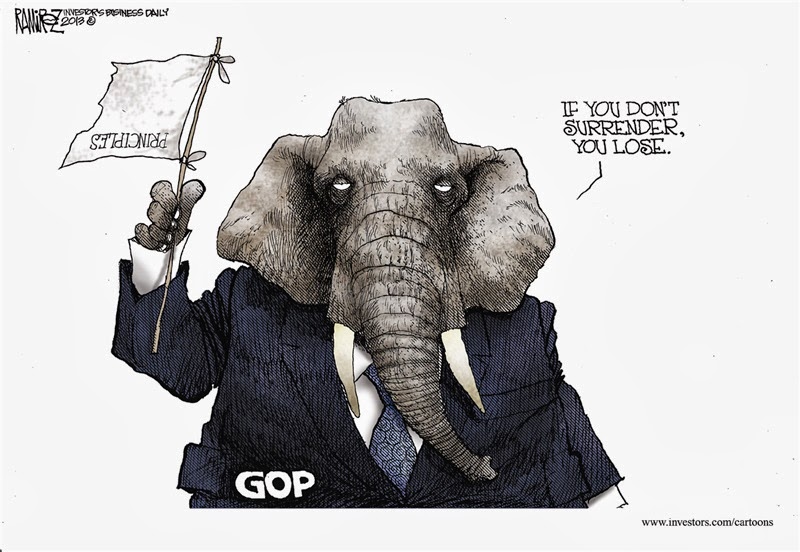 In previous writings I have mentioned a political 1990s columnist named Samuel Francis. He made few friends in the Republican Party, which he insisted on calling “the stupid party.” His style was imprudent and somewhat rude, but he had a point. He pinned that moniker on Republicans because of their propensity for “snatching defeat from the jaws of victory.” Time and again Republicans folded with a winning hand because Democrats called them mean names, or because the New York Times charged them with “insensitivity” or “racism.” (No! Not that!) Dr. Francis died in 2005, but if he were alive today he would be blasting the same GOP milquetoasts who head for the tall timber at the first sound of the guns.

Democrats, of course, do none of this. When they’re in charge, they are deaf to all criticism. They head into battle at full gallop, ruthlessly trashing any pesky Congressional rules that might block their agenda. But when they lose political control, Dems don’t curl up in a fetal position. They stay on the attack to set the stage for the next election. For them, the work is never done, the fight is never over. They may suffer setbacks, but are never defeated. Their most important rule (of the few they play by) absolutely forbids public criticism of another Democrat. They extend no hand of comity across the aisle, and they give no quarter to political enemies. It is all war, all the time, and woe unto anyone who gets in their way. (The “loyal opposition?” You must be kidding.)

Dems ran the Congress for all but a few years from 1933 to 1995, and they held the White House for 34 of those 62 years. So one can see why they’re not used to being the minority party. They have no experience with tugging the forelock and following the GOP’s lead. They believe leading is their role, and they don’t fancy handing it over to a bunch of yahoos from Flyover Country.

The Trump era – now two years along – has furnished some important insights on what the two parties are really made of. Republicans are obviously no more prepared to lead now than they were during the decades of Democratic rule. During the Obama presidency, Republicans faithfully promised their voters that they would really get things done if only they controlled the Congress and the presidency. But after the 2016 election, with a strong president in charge, and majorities in both houses of Congress, Republicans looked more like a herd of cats than an army on the march. Several senators obviously thought they would have been much better presidents than Mr. Trump, and some seem more aligned with the Democrats than with their own party. That gang opposed nearly every move Mr. Trump made.

Democrats never do this when they have the Congress and the White House. Indeed, even without control of the presidency and Congress, Democrat-holdovers in the Department of Justice and other cabinet departments managed to get a Special Prosecutor appointed to investigate supposed “collusion” between the Trump campaign and Russian agents to steal the 2016 election. The now-completed two-year investigation by Special Counsel Robert Mueller, which has produced no evidence of such collusion, has nevertheless succeeded in diverting public attention away from treasonous activities of Obama Administration officials that laid the groundwork for smearing Mr. Trump and obstructing his administration. Hillary Clinton has also skated free on security violations that would have put any ordinary citizen in the pokey.

The relatively rare occurrence of a Republican majority and presidency has revealed Democrats’ true colors. Since FDR’s time, Democrats have carefully cultivated a reputation as the “caring” party. They were the party with a heart – the sword and shield of the ordinary working man (and woman), and the counter to Republican “meanness.” Via the magic of modern media they have actually transmogrified themselves from hooded night-riders of the Klan into the party that truly looks after minorities, women, illegal immigrants, sexual deviants, potheads, criminals, abortionists, and gender-confused persons everywhere. (Is this a great country, or what?) They rode this all-caring, all-sensitive shtick all the way through the 2016 campaign – fully expecting it to make Hillary Clinton the first female president. 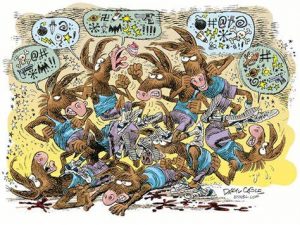 But the voters didn’t buy the prospect of a third Obama term. Working people and families from the Normal Culture saw through all the carefully crafted, faux-compassion rhetoric to grasp the (really) dirty truth: Democrats don’t give a rap about them, except as a source of votes to put them in office. Voters rejected Hillary “More of the Same” Clinton and went for Donald Trump and his bold promises – in numbers large enough to let Mr. T sweep the “rust belt” and most of the South and West. The outspoken TV Reality star shocked the world by handing Mrs. Clinton a stunning electoral defeat from which she and her party have not yet recovered. Some commentators believe the wound Democrats received might be fatal.

In the wake of that catastrophe, the mask that hid the Democratic Party’s true character began to slip, and has finally fallen away entirely. It is now clear – beyond peradventure of doubt – that Democrats care nothing for the safety and well-being of most Americans. Dems have done everything possible to block Republican proposals to undo Obamacare’s disastrous effects. They cheered and celebrated as unelected judges struck down presidential orders designed to control immigration from countries that produce dangerous terrorists, and have fought all legislative attempts to stop hordes of illegal aliens from crossing our borders. They expect illegals to become new Democrat voters, and they obviously don’t care a fig if they’re criminals or terrorists.

On college campuses, “liberals” increasingly mount violent attacks on conservatives and Trump-supporters. Last month a representative of the conservative Leadership Institute named Hayden Williams was attacked and injured on the campus of UC-Berkley by a violent student. Conservative speakers are shouted down and driven from the hallowed halls of once-great bastions of free speech, debate, and creative thought. I have seen videos of academics explaining why universities no longer allow free political speech. (The inmates are running the asylum.)

At a pro-life demonstration in Washington, DC, MAGA-cap wearing students from a Kentucky Catholic school were accosted by a party of militant black demonstrators and a drum-beating Native American activist. After Big Media released edited film of the events and falsely accused the students of “racism,” Democrats across the country ran with the story – denouncing the students’ behavior and demanding their expulsion. Later, when more fulsome video of the scene showed that the students had been falsely accused, scarcely a word of apology or retraction was heard from politicians and media talking heads who had rushed to judgment.

Young Democrats are seriously hawking socialism as a wonderful “new” idea that will furnish free everything – college, a livable income, health care, and housing – to everyone. A freshman representative from New York advocates radical deconstruction of the American economy and way of life. She demands elimination of fossil-fuel usage and air travel, and says we’ll be kaput in a dozen years unless we act now. Big Media gives her the star-treatment because she has high energy, looks good on camera, and can talk the hind leg off a mule. Democrats campaigning for the presidency are following her lead. Estimates of the cost of her Green New Deal run as high as $100 trillion, but she says we’ll just print the money we need.

Democrats are now the party of the “rich and shameless,” the politically well-connected, stoned academics, socialists, race- and gender-hustlers, baby-killers, peddlers of fetal organs, open-borders advocates, and unassimilated foreign nationalists. The party’s heroes and standard-bearers are film stars, athletes, junk-journalists, deviants, radical politicians, militant racists, and activist “educators.” They spew hatred for people we once called “America’s backbone,” and attack any who hold different views. Today’s Democrats seem to hate everything the country (and their own party) once stood for. What a tragedy.

I am not the first to note that patriots like John F. Kennedy and Harry Truman wouldn’t fit in today’s Democratic Party. Democrats make war on the police and oppose prudent measures meant to protect ordinary citizens from criminals and terrorists. Well-protected by their armed guards and gated communities, Democrat bigwigs know that miscreants can’t touch them. Their livelihoods are academic- or government-sinecures insulated from economic vagaries. And their kids attend safe, orderly, well-taught private schools – far away from public schools where the hoi polloi endure disruption from uncontrollable “students” who have no interest in learning. FDR’s “caring” party is just a memory. Democrats have become the party of the scorched earth.

So much for the Democrats. For their part, Republicans have shown a variety of “colors” during Mr. Trump’s presidency. With control of the White House and the Congress, the GOP had a golden opportunity to undo the damage Mr. Obama did to the country’s security and economic well-being. To their credit, they did lower taxes, energize business, shrink government and get the economy moving. And, after a deuce of a scrap, they managed to get Mr. Trump’s two nominees confirmed to the Supreme Court.

But with a real chance to roll back the disastrous Affordable Care Act and enable citizens to (actually) afford health insurance, Republicans fumbled the ball. Several GOP Senators have also stubbornly refused to fund the border wall that would stanch the flood of ne’er-do-wells, welfare-seekers and outright criminals crossing our borders. Action on Obamacare and border-security was fervently desired by voters who elected Mr. Trump and gave Republicans Congressional majorities in 2016. But the stupid gene is still in the GOP’s DNA. Once again they snatched defeat from the jaws of victory. Their disappointed voters let the Democrats take back the House of Representatives in 2018.

With Democrats running the House, it will be harder for Republicans to enact the Trump agenda. But they can still make political hay the way Democrats do it – even without a House-majority. Mr. Trump’s economy is booming, and his approval ratings are high. His voters are sticking with him. If Republicans support him in the Congress, they can still accomplish a lot. But if they fumble this chance, another one like it might be a long time coming, if ever.

Having watched American politics for 67 years, I can say that this totally wigged-out opposition to a sitting president by an entire political party is unprecedented in the modern era. It is a complete rejection of the unwritten “American political compact,” whereby all factions agree to adhere to the Constitution and accept every elected president. Democrats broke the compact once before, when some states rejected an elected president and seceded to form a separate country. A catastrophic civil war was the result. Now they’re trashing the compact again by rejecting Mr. Trump’s governance, parts of the Bill of Rights, control of our borders, and the way we elect a president. I don’t know where this will end up, but it certainly won’t be in a good place.

A new political model is being established for the future, and both parties can play this game. Unfortunately, though, it’s not really a game. If we don’t stop playing at it, we’re going to be in real trouble. 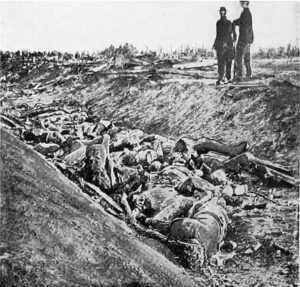