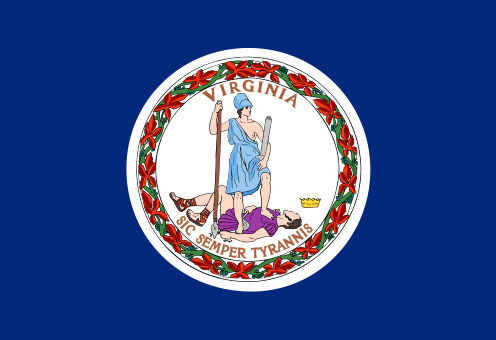 Virginia’s logo and motto embody the revolutionary zeal of our Founders who initiated the American Revolution that overthrew the rule of Britain’s King George III – “Sic Semper Tyrannis,” Thus Always To Tyrants.

America has stood up to dictators ever since. We led the destruction of fascism and Soviet communism. We are the vanguard of freedom and our system of two-party elections and checks and balances has assured that career politicians here do not become tyrants.

But with Virginia trending “blue” and Democrats feeling the winds at their backs, Virginia Gov. Ralph Northam has become a dictator by abusing the emergency powers of state law, whose intent was to deal with natural disasters like floods and hurricanes – not shutting down the economy to combat a viral epidemic.

The man who lied about being photographed in blackface in his medical school yearbook next to another student in Klan robes, whose nickname in his youth was  “Coonman”, has instituted some of the most draconian measures to combat the coronavirus epidemic of any governor in the nation.

He is among governors who have abused the President’s Coronavirus Guidelines to set policy and play politics. And, Virginia as of this writing is among the states that are low prevalence –23rd in per capita deaths and 25th in per capita cases of the 50 states

And 50 of the 300 in the reported deaths as of April 21 were in three nursing homes, that we know of.  But Northam has shown no leadership to help these homes, where staff has fled from helping frail elderly people for fear of being ill.

His proposed expenditures includes increasing the Medicaid per diem for these facilities  – but that does not guarantee better salaries or PPE for the underpaid but needed staffers, who are bailing out.

You would think a physician like him would know that disease spreads in congregant facilities and dense communities and they need personal protective equipment (PPE) too.

Yet, he barred elective surgeries to save on PPE, which has cut the income of many hospitals and doctors’ offices leading to 30,000 health care workers being furloughed. However, he has allowed some 15,000 abortions to continue despite its consumption of PPE.

Closing schools and businesses he feels are “not essential” till June 10, but keeping state liquor stores open and only closing state lottery centers to April 30 are among the abuses of power.  He extended closure of recreation facilities and gyms til May 8 and disallows people from lying on beaches – though Virginia Beach hotel stays, alone, turn in $350 million a year in revenue to the economy  – but allows people to fish on the beach or layout a blanket in a state park.

He has abused statistics and “experts” to justify his shutdown to June 10th and possibly to support more racial preferences in hiring and contracts, as noted by Hans Bader in this blog.

Some 150,000 Virginias filed for unemployment last week due to his mandated closings of certain businesses, and 75,000  have been rejected!

Thousands of school children are not being educated well because some districts do not have proper broadband nor tablets for kids to learn at home.  And, with $70 million in federal stimulus money coming to Virginia, none of his proposals call for helping those school districts or funding summer school.

Rather, he wants the General Assembly to approve money for a child care program for “essential workers,” that he’s putting his wife in charge of!

And, I have not gotten into the “progressive” legislation adopted in March by the Democrat-controlled Assembly which weakens criminal justice laws, expand control over private gun ownership and weaken oversight over voting in order to destroy any semblance of a two party system in this state and turn us into a high-tax, big regulation, job killing state like New Jersey or New York.

But tomorrow, with the General Assembly going into session in Richmond to review his budget amendments, a throng of Virginia residents who joined the Facebook pages “Reopen Virginia” and “End the Lockdown”  will flock to Richmond to protest against the dictator Northam and demand he let off the brakes.

We will be honking and waving banners and signs like Americans did to reopen Maryland, Michigan, Pennsylvania, Kentucky and other states.

We must stand up to tyranny! We are a democracy, not a meritocracy with rule by “experts.”  Even in a health crisis, democracy and free enterprise must rule our nation, and the Republicans in the General Assembly need to stand up to this dictator.

I understand this is a special session to deal with his amendments and take up and down votes, which the state constitution states .  But I urge the leaders of the Republican minority to stand up and open debate on what the governor is doing to destroy our economy and livelihood and turn Virginia into a one-party dictatorship.

Liberals are great at protesting and being heard and often use in-your-face provocation. And the media take notice.

But it’s time the silent majority of Virginia speaks out by protesting in Richmond April 22.   Please demonstrate peacefully and do social distancing or stay in your vehicles.

President Trump has urged the Liberation of Virginia and General Assembly Republicans and willing Democrats need to support that.