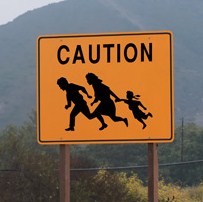 Siding with the Democrats on Amnesty for Illegal Immigrants

Nothing is more important for the integrity of our Republic than public officials doing in office what they promised to do when campaigning, and to uphold their oath to defend the Constitution once elected.[read_more]

During the 2014 race almost every Republican candidate for the Congress agreed that securing the southwestern border and fixing the nation’s broken immigration system was the number one goal, not Amnesty.

The President, of course, has disregarded his constitutional duty (again) and has ignored existing law, to fund “backdoor” Amnesty for five million (possibly closer to ten million) illegal aliens through the Department of Homeland Security. His action is unprecedented, illegal, and defies the Constitutional separation of powers.

And yet the feckless, incompetent and thoroughly dishonest GOP leadership were in on the scam from the start, to accomplish what they wanted to begin with. Amnesty.

First, the Congress right after the elections passed the Cromulous budget that the lapdog Republicans went along with. It was a massive pork laden monstrosity that no one read, that funded the Obama-Reid government though September, and buried in it was funding for DHS implementing the President’s illegal program for “backdoor” amnesty. To make the show look good, Republicans only funded DHS in the Cromulous bill until the end of February to avoid being tarred and feathered prior to the newly elected Congress being sworn into office in January.

After being sworn in, the House passed a DHS bill without amnesty funding and sent it to the Senate. After a bit of cheesy theater, Senate Republicans gave up what little fight they had, and voted for a “clean funding” for DHS last week, foregoing any further efforts to defund “executive amnesty.” They whined like little kids on a playground about that big, bad President making them vote for that nasty ‘ol amnesty.

That, of course, is a bald faced lie. They wanted to do it. They want amnesty. They believe in it. They knew that the House bill if passed in the Senate, would have put the ball in the Obama’s court. And if he vetoed the bill, then he would be the obstructer – and over 90% of the DHS personnel are “essential” personnel anyway, so there would be no actual “shutdown,” regardless of the budget impasse.

The bill was sent back to the House, and after a bit of more cheesy theater, Speaker Boehner capitulated today. After a good cry, the Speaker pulled the plug and allowed the bill to the floor so that Democrats could pass it with 75 “Republicans” to help. It was all grand theater, designed and manipulated to appear as though there were nothing else the Congress could do.

It’s is like showing up at the OK Corral with a butter knife.

Every American should mark this vote well. Every Senator and every House member that voted for this scam deserves a primary challenge, if for no other reason than they have violated their sacred oath to the citizens of the nation – to defend and uphold the Constitution and the rule of law.

Siding with the Democrats on Amnesty for Illegal Immigrants was last modified: March 4th, 2015 by Michael Giere

I suppose you can cite the page and paragraph so I can follow along on my copy of the document in question. K? Thanx.

“Amnesty Barb” — I like that phrase. Good for her primary challenger to use next year.

You cannot win the battle if you do not “prep” the battlefield. Before their troops can advance from the line of departure, commanders must lay down artillery supporting fire and air support. GOP “leaders” in Congress and in Virginia have made no serious attempt to lay down that supporting fire to win the hearts and minds of the electorate by simply providing an estimated cost of this third world invasion. GOP “leaders” have made no attempt to depict Obama as a third world dictator who sees our constitution as an ice cream cone on a summer’s day – easily melted. Los immigrantes illegales nos cuestan mucho dinero and they are undermining the rule of law – the very thing that separates us from the failed societies which they are fleeing. http://www.fairus.org/issues/publications/state-cost-studies