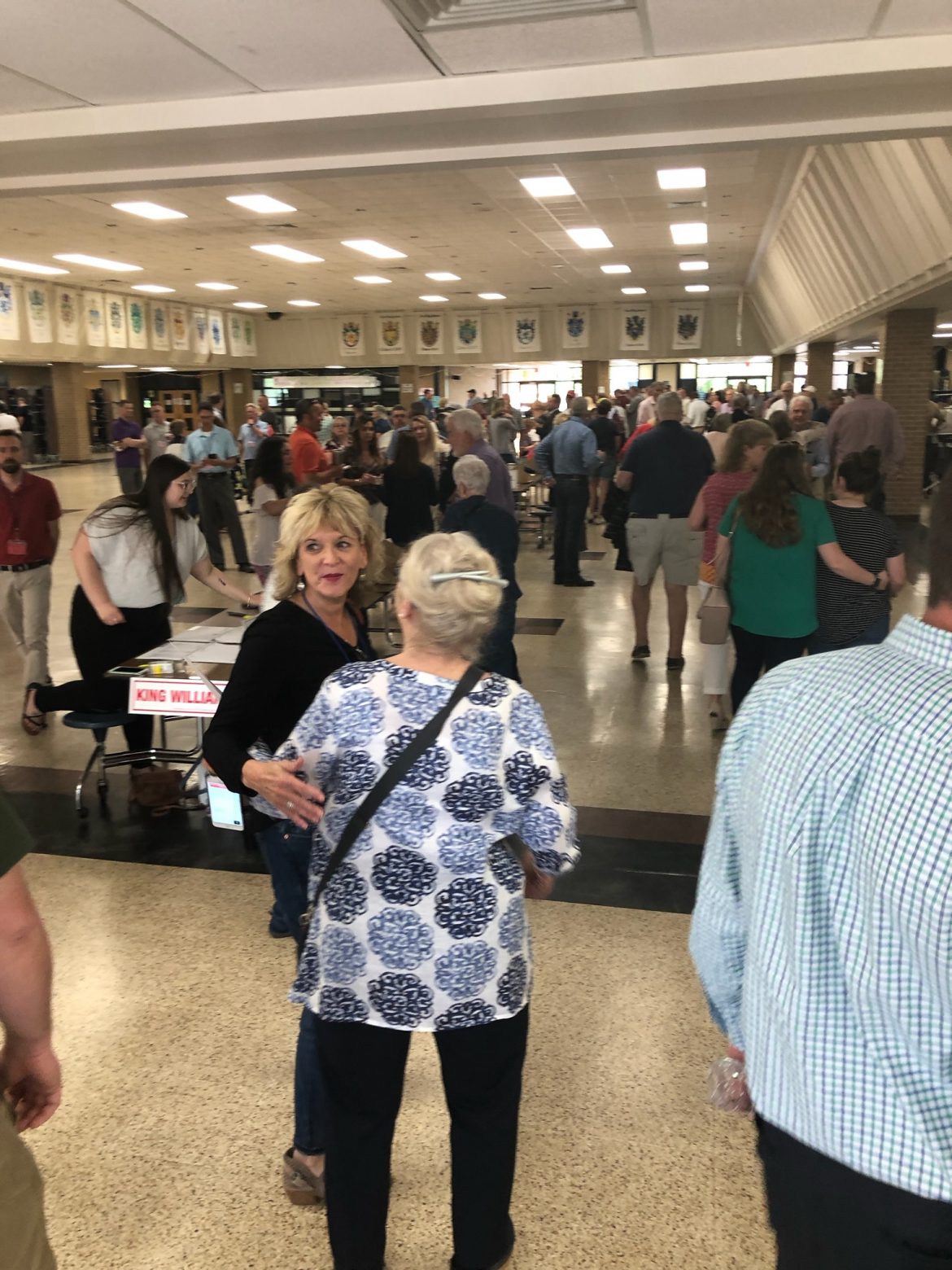 Update 3: Wyatt Wins! Final results of the balloting were as follows:

UPDATE 2: Scott Wyatt took the stage at around 11:30 to give his speech and was met with thunderous applause.

Earlier Senator David Suetterlein addressed the convention, saying that “holding this convention is keeping faith with the voters.”

“If anyone is confused today, let me tell you,” Suetterlein declared, “you are at the 97th District House Republican Convention.”

UPDATE 1: The convention was called to order this morning at about 10:30 AM. after a speech by Ryan McDougle, Daniel Bradshaw was elected temporary Chairman of the Convention.

After a report of the credentials committee, there were 486 total delegates certified to be in attendance with the breakdown as follows: Hanover – 404 delegates, New Kent – 53 delegates, King William – 29 delegates.

Hundred of people filed into Atlee High School in Hanover this morning to attend the 97th District Convention to select the Republican nominee for the Virginia House of Delegates.

With friendly volunteers on hand to check in delegates, grassroots Republicans have been arriving steadily all morning to receive their credentials and make sure their voice is heard.

These delegates are showing up to vote despite receiving an improper, and inaccurate, missive fired off by RPV Chairman, Jack Wilson, who tried to claim that the convention had been cancelled. Jack Wilson had no authority to make those claims.

Now the Peace campaign is in a catch-22. They replaced Scott Wyatt on the Legislative District Committee so they could cancel the convention mere days before it was to be held because they knew Peace was going to lose. Their hope was that nobody would show up, and that would render any appeal of their scheme moot.

But the convention is going on as planned and their vote-rigging scheme will be challenged. Elected officials are ignoring Jack Wilson’s claims and attending the convention, and Senator Tommy Norment penned a scathing rebuke of the RPV Chairman.

Does the Peace campaign continue to tell their delegates to stay away, and cede the vote to Wyatt, or show up and try to cause problems, or at least make a decent showing?

Updates will be posted as I receive them.

In a surprise to no one, Chris Peace wins his pretend Firehouse primary – The Bull Elephant June 1, 2019 at 7:04 pm

[…] Peace Pretend Primary was not sanctioned by the Republican party. Scott Wyatt was declared the nominee in the 97th district following a convention on May 4th. Peace appealed to the First District Congressional Committee, […]

[…] Scott Wyatt won a landslide victory at the 97th District Convention, and after the 1st District Committee upheld the results of that […]