Last night a Wire Fox Terrier named Sky won the coveted Best in Show at the most famous dog show in the world, the Westminster Kennel Club Dog Show.  A bloodhound named Nathan was the crowd favorite but the judge chose 5 year old Sky.  Terriers have won the Westminster 46 times, more than any other breed.  This is the 14th win for a Wire Fox Terrier.   No bloodhound has ever won. More here and here. 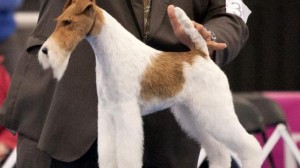