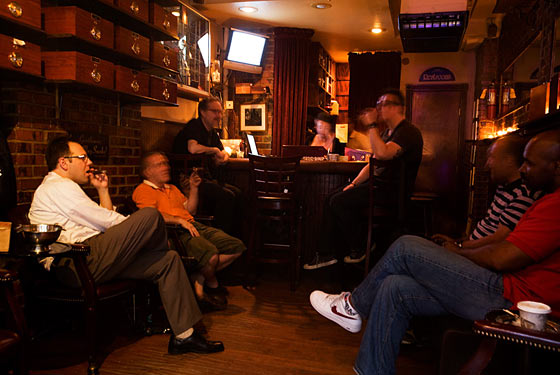 I know what you’re thinking. This is the year 2016. I have just described a place that doesn’t exist. Drink some coffee and sober up, buddy. We’ve got terrorists blowing things up all over the world. We’ve got division being stirred up in every corner of American life, from race to religion. Basic things that we used to take for granted, like gender, are now blurred lines. Simply put, the world’s going to hell in a hand basket. It’s hard to find a respite.

Well, I’ve found a place like I’ve just described. I’ve spent most of my adult life in that community. That place is your local cigar shop. There’s a fairly diverse group of guys (and the occasional gal) that spend their time in these places. Our community consists of published authors, political hacks, college professors, musicians, chauffeurs, construction workers, doctors, techies, soccer moms, unemployed people, military, jocks, nerds, students, and retirees. We include people of all races, ethnicities, and backgrounds, There are some really rich and successful people that hang out in the cigar shops but 99% of them do not have an ego, at least in that space. You wouldn’t know what these people did for a living unless you asked them. The shared interest of smoking a quality cigar civilizes everyone and brings us all together in the shop. It’s a family, the brothers and sisters of the leaf.

If you’ve never been in a cigar shop, never smoked a cigar, and just don’t get it, I’ll explain it to you. It’s no secret that Americans live the fastest paced lives on the planet. Our veins are filled with coffee and caffeine. We’re amped up. We never slow down. Smoking a cigar makes us slow down and notice the forest through the trees. It relaxes us. The act of slowing down and smoking a cigar forces people to forget their own baloney and have real genuine conversations with the people around us. It is a powerful and wonderful starting point that creates human connection. It’s like sports but we’re all on the same team. We don’t get high and our senses don’t get dulled like some other hobbies. Also, premium cigars are not like cigarettes. They’re composed of all natural tobacco and contain none of the cancer causing additives like tar that the cigarette companies put into their products. The companies that produce and/or sell hand-made cigars are generally family owned and run businesses. Premium cigars are not marketed to and neither are they appealing to minors. Cigar shops also are far more diligent and have an astronomically higher success rate in not selling to the underage than other tobacco selling stores. These are wonderful places that give a positive contribution to society, not a negative one.

The cigar community is a place where people take their problems, discuss relationship issues, and talk about work, family, and career issues. Really anything else you can think of is discussed. We take care of each other. If there’s a death in a community member’s family, the whole group from that shop will show up at the funeral. They will generally be the last people to leave. If someone’s car’s broken down, there’s always someone willing to give a ride. If someone’s having a bad day, they go to the shop and laugh with the friends they’ve made there. If someone has a kid or gets married, cigars all around! Life is shared and not just talked about.

There’s no such thing as political correctness in a cigar shop. There’s no need for it. The jokes and stories fly with such frequency that it’s impossible to not leave the shop with a smile on your face. No one tiptoes around the tulips. No one gets offended by jokes because no one’s looking for a hidden meaning or a political agenda. The customers just like to make each other laugh or have an honest discussion. In short, in your local cigar shop, you’ve got a great group of people acting the way everyone else should. It is like this all around the country.

It’s a shame the FDA and the federal government wants to shut the cigar industry down and close down our community.  The regulations they are likely to impose on us are imminent, and would force many neighborhood shops to close. With all the hate, unrest, and general baloney going on in the world, I have to ask, why in the world would the government destroy something that brings people together?

[…] If you know nothing about the cigar community, take a look at a previous writing, a post entitled Smoke Filled Rooms. […]

We need more of these cigar lounges. We also need a smoke longes in car dealerships so men can go and smoke while their car is worked n.

Sorry, promised a guy who sounded like a Cylon and talked through a hole in his throat that I wouldn’t go there.

A Cylon? You show your age, sir.

Wow that brings back memories.

So true…I’d get more anxious in a cigar shop, knowing I’m dying a bit more with every breath 🙂

I get it though.

All very true about cigar shops. It’s a unique culture.