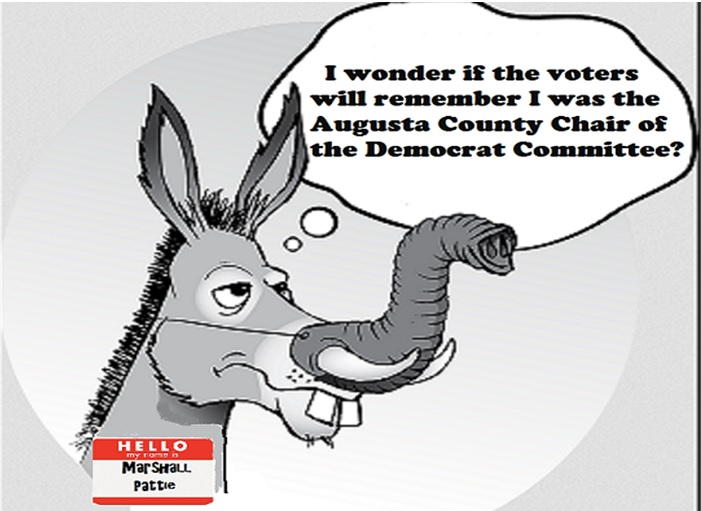 So, about Marshall Pattie….

If you are a Republican voter in district 24 you need to know the facts about Senate candidate Marshall Pattie, who claims to be a Republican.

Marshall Pattie is no Republican.

In 2008, there were misguided Republicans who wanted to support the first black president, so they foolishly voted for Barack Obama.  Should we forgive them?  That’s up to you to decide.

What is not forgivable are people who supported Barack Obama’s re-election!  At the time of his re-election, Obama had forced Obamacare upon us.  No true Republican would stand with Obama after Obamacare!   It is a basic litmus test.

In an attempt to fool voters, Mr. Pattie is claiming to now be a Republican.  Are his claims plausible?

In an email (February 17, 2015) Mr. Pattie claimed to be ignorant about what Democrats believed.  You can’t make this stuff up.  To quote his email: “the main reason why I continued to consider myself a Democrat was my general ignorance of what was occurring politically with this country.”  Mr. Pattie was not chairman of the Democrat party for a few months.  He was chairman from 2009 to 2011—2 years.

Is Mr. Pattie stupid?  He earned a Bachelor’s degree from Texas Christian University.  Guess what his major was?  Answer: political science.  So how could he possibly claim ignorance of what Democrats and Barack Obama stand for?  Ignorance is not a reasonable excuse unless Mr. Pattie got a refund from the University for failing to educate him.

In 2009 Mr. Pattie, a professor at James Madison University, was quoted in the article “Valley marks inauguration” saying “I don’t think there’s been this much enthusiasm, certainly not in my lifetime, for any one president.”  It sure seems like he was paying attention.

Mr. Pattie wasn’t just an activist.  As a James Madison University professor, he fully embraced the Democrat liberal agenda.  He was a member of the Academy of Management.  Within the Academy, Pattie CHOSE to specialize in Gender and Diversity Organizations for years.  In 2005 Mr. Pattie attended the Gay, Lesbian, Bisexual and Transgender conference in Honolulu!  Mr. Pattie wasn’t just an attendee.  He authored a paper for review at this conference.  He continued to attend GDO conferences even as recently as 2011.

In 2007, Pattie co-authored an article with Myrtle Bell entitled – Exploring the Literature on Relationships between Gender Roles.  What’s the harm?  The authors represented the cutting-edge notion of “gender role theory” as it was used “to explain” certain employee problems.  It demonstrates not only Pattie’s political association and awareness of this theory, but more importantly it show that he was one of the liberal-leftie’s leading academics in this field of study.  As we now know, gender role theory is the excuse used to explain all issues from a liberal, anti-Christian perspective and it is the theory used to advance homosexual and transgender policy.

In 2010 Pattie and his wife hosted a fundraiser for then Democrat Congressman Tom Perriello at their home.   Congressman Perriello could not be present so Mr. Pattie had Senator Donald McEachin fill in.  McEachin is best known for proposing that GLBT individuals be added to the list of protected classes.  Do you see a pattern here?

The only Republican who should vote for Marshall Pattie is Bruce/Caitlyn Jenner.

So, about Marshall Pattie…. was last modified: June 5th, 2015 by Steven Thomas

[…] Republicans have long been wary of Pattie, reportedly a 2009-2011 chair of the Augusta County Democrats, a campaign organizer for the 2012 reelection of […]