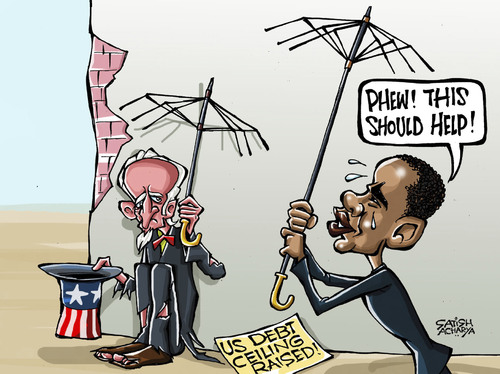 The annual Battle of the Budget in Washington is ushering in a new episode of the Debt Ceiling Follies.  Republicans are trying valiantly to stop more Biden spending wherever possible, and keep a lid on taxes until the November elections. Democrats – who see a possible electoral bloodbath ahead in November – are running round the country warning that Republican majorities in Congress will resist raising the debt ceiling. This, they claim, would hurt senior citizens by blocking timely issuance of monthly Social Security pension-payments. The question is which side will blink first.

For his part, Joe Biden is throwing in the kitchen sink – doubling down on Dems’ claim that failing to raise the debt-ceiling will be a fiscal “catastrophe.” He claims that the USA would default on its debt-obligations and be unable to send Social Security recipients their monthly checks. He says critically ill patients might not get needed medical care, and darkly predicts a resurgence of the COVID pandemic. The scare-mongering has reached levels rarely seen – even in a city which thrives on such hyperbole.

In the course of all this fiscal catastrophe-hype, very few questions have been raised by the media about the validity of those scaremonger-claims. Most notably, I have not seen a single report pronouncing the no-Social-Security-checks claim a complete fabrication. I don’t say this lightly, but I am certain that the threat is empty – or should be, if the law is followed. (These days, of course, hoping that the law will be followed is basically a crap-shoot.)

The fact is that Social Security is an entirely separate financial system. Its fiscal books are separate from the federal government’s books. The system receives its funds from working people. Those “payroll taxes” (as they are often called) are used directly to fund the benefits paid every month to pensioners and other Social Security recipients.

In past years, any FICA “surpluses” – i.e., monies received that exceeded those needed to pay benefits – went into the Old-Age and Survivors and Disability Insurance (OASDI) Trust Fund (commonly known as the Social Security Trust Fund). The OASDI, of course, is now a “virtual reality,” since those surpluses are immediately borrowed by the federal government to fund its operating deficits. At present, the OASDI Trust Fund contains $2.9 trillion in special securities issued by the federal treasury.

Last year the Social Security System reached a point where payroll taxes could not entirely cover its benefit payments. Total income, including interest to the combined OASI and DI Trust Funds, amounted to $1.088 trillion in 2021. This included:

Total expenditures from the combined OASI and DI Trust Funds for 2021 totaled $1.145 trillion, so $57 billion had to be drawn from the Trust Funds to cover benefit payments. The federal treasury honored the Trust Fund’s treasury-securities by borrowing the needed $57 billion from other lenders.

Of course, tapping into the Trust Fund is not very good for Social Security in the long term. By approximately 2037 (or 2040, or 2043, depending on how it is estimated), the OASDI could be empty, causing a major political readjustment with respect to retirement pensions. Analysts differ on whether the country’s employment-levels can increase enough to put Social Security in the black once again.

The bottom line, though, is that Mr. Biden’s ominous yarn about seniors not getting their pension-checks if the debt-ceiling isn’t raised is complete rubbish. It’s possible that he doesn’t realize that Social Security has separate books, of course, but a president who isn’t aware of this really should not be sitting in the Oval Office. It’s more likely that Mr. Biden does know the truth, but has chosen to mislead fearful old people (and their children) for political advantage. He might also be aware that some Congress-people don’t realize the truth either. (One hopes that no Republicans are among that group.)

Whatever happens with the debt-ceiling, there is no chance of Social Security checks not going out on time, unless the president chooses to violate the law and stop them by executive order. It’s difficult to visualize him doing that, but he has surprised us before with unexpected executive orders, and he could do it again.

The difference in this case would be the number of people affected by presidential actions – i.e., millions of pensioners instead of just a few thousand oil-pipeline workers thrown out of work. If Social Security checks are stopped, somebody is bound to notice that his actions are actually illegal. Surely a gaggle of lawsuits would spring up to challenge his actions.

Actually, no lawsuits of this kind should be entertained by the lower courts – unless judges become scofflaws, too. Surprising numbers of citizens (who possibly snoozed through civics class) don’t realize that a sitting president cannot be sued for actions performed as part of his official duties. Nor can any senator, representative, cabinet officer, military person, or civil servant. All these are expressly exempted by the Constitution from arrest or legal action. It’s not hard to see that the country’s governance would be paralyzed by an avalanche of lawsuits, should this be allowed.

There are ways to remove or discipline each of the parties listed above. But a sitting president cannot be disciplined. The only Constitutional remedy is impeachment by the House of Representative and conviction by two-thirds vote of the Senate. Conviction results in removal of the official from office.

Of 46 presidents, only three have been impeached (i.e., formally indicted by the House), and none has been convicted. Andrew Johnson’s was acquitted by a single vote. Bill Clinton was impeached on two articles, but the Senate failed to convict him on either. Donald Trump – of fond recent memory – was impeached twice, but was acquitted both times.

A Republican-controlled Senate failed to convict Mr. Clinton on two serious charges involving jury-tampering and perjury in the Paula Jones trial. (If these were not High Crimes, within the meaning of the Constitutional language, one wonders what would be.) One article failed, 45-55; the other failed, 50-50. Ten Republicans voted against the first article, and five voted against the second. All Democrats voted against both articles. A president inclined to flout the law obviously need not fear removal from office, unless the charge is pilfering from the White House coffee-supplies. (Some crimes can’t be excused.)

Those votes surely have not escaped Mr. Biden’s notice. Both House and Senate are currently under the (narrow) control of his own party, so of course there is no possibility of his impeachment or conviction in the three months ahead. But the upcoming mid-term elections could produce a drastic realignment of political orbits. Should Republicans regain control of the Congress, Mr. Biden might find an illegal stoppage of Social Security payments a risky gambit. Unless he can stop those elections, he could be in big trouble.

Any of my readers who think things are out of control are right. And if we want to re-establish control, we need to vote out the gang that seems determined to spend us into penury. We have to stop fooling around with that bunch. These are dangerous times.

“There is treasure to be desired…in the dwelling of the wise; but a foolish man spendeth it up.” (Proverbs 21:20; KJV)