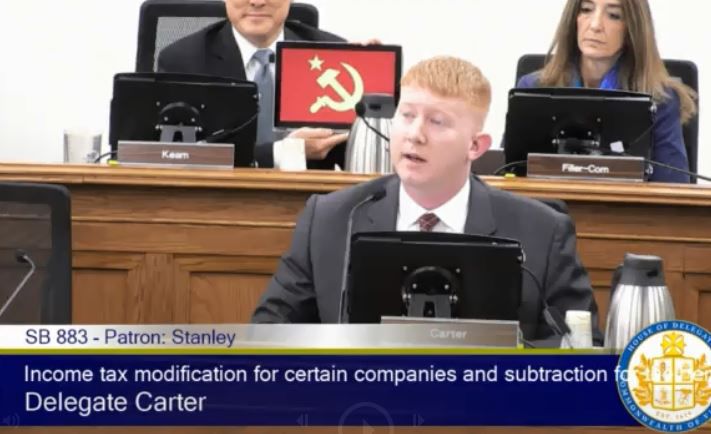 Delegate Lee Carter (Socialist-Manassas) is in his first term having won election in 2017 against Jackson Miller in District 50.  Carter is 31 years old and a self-proclaimed socialist. In the General Assembly Carter did not get along well with Republicans and many Democrat delegates. (See the photo above of Delegate Keam (D-Fairfax) mocking Carter.)

Last week Carter went on a Twitter tear exposing more about his past than anyone would want to know.  Definitely TMI.  If nothing else his Tweets show his very questionable judgment, instability,  and lack of control.  All of 15 Tweets can be found here with some of the highlights below:

Something I’ve noticed: the corporate establishment doesn’t know how to deal with socialists running for office. They tried ignoring me, and when that didn’t work they tried redbaiting. That didn’t work either, so they’re smearing @Ocasio2018 and @SalazarSenate18 (1/15)

So here are some of the things you can expect to be used against me. Growing up, my family’s income varied a lot. Some years were good, other years we had kerosene heaters in the living room because we couldn’t afford to heat the whole house. Good years don’t negate that. (3/15)

I’m a Unitarian Universalist, from an agnostic perspective. I was raised irreligious, which led to a lot of bullying growing up in the bible belt. Experimented with various faiths as a young adult, but came back to largely agnostic UU.
(5/15

I was a terrible student in school, and continue to be one in college, but for different reasons. Back then it was laziness and rebellion, now I’m years behind where I want to be and have no degree yet b/c I keep having to quit my classes to go back to work. (6/15

I’m an elder millennial and an internet early adopter, so my formative years happened on the internet. I said horrible things without realizing the harm of them. Homophobic, transphobic, sometimes sexist or racially insensitive. Wish I could undo that harm, but I can’t. (7/15)

I’m deeply conflicted about my military service. Proud to have served, but that service was stolen by foreign policy that treats human life as secondary to corporate profit and control over the global south. Thankful I never had to go into combat, just fixed phones (8/15)

I got arrested at boot camp on suspicion of assault. It was quickly ruled self defense, and they let me go after about an hour or two. Terrifying situation to be in at age 18. (9/15)

I’ve been fired from one job (it was my fault – burnout) and forced to resign from another (retaliation for worker’s comp). Laid off from many more because the companies ran out of money or work for me. Financial struggle from that includes a foreclosure and a car repo (9/15)

I’m on divorce #3. I have no hard feelings against the first, in fact we’re friends again, but the second and third were extremely unhealthy relationships. I got out for my own health and safety, even had to get a emergency protective order at one point. (10/15)

On a related note, I’ve lived through abuse, including rape I didn’t report because I didn’t expect any justice as a male survivor of rape by an intimate partner. I won’t name her publicly. Struggled with intermittent depression ever since, but it gets better w/ time (11/15)

The custody fight for my daughter got ugly, to the point where a baseless claim for termination of parental rights was filed against me. I agreed to pay arrearage I didn’t actually owe in the settlement because it was cheaper than paying a lawyer to fight it all the way (12/15)

Just like everyone else under 35, I’m sure explicit images or video of me exists out there somewhere. Unlike Anthony Weiner, I never sent them unsolicited, and never while I was in a relationship. That’s just a reality of dating in the smartphone era. (13/15)

To sum up Carter’s rant, he’s 31 years old, on his third divorce, with custody problems.  He’s been sued for back payments of child support.  His job history is poor, having quit or been fired numerous times. His financial history is worse.  He’s had a forecloser and a car repossessed.  It’s likely there are nude photos of Delegate Carter on the internet because he’s “just like everyone else under 35”.  No, he’s not.  The good news (?) is those photos were taken when he was not in a relationship.  Huh?  Was he sending the photos to random women?  Carter did very poorly in school and has yet to complete his degree.  He’s conflicted about his military service and was arrested while in boot camp.  He has survived rape and depression.  On the internet, Carter has said things that were “Homophobic, transphobic, sometimes sexist or racially insensitive”.

Could the Democrats have chosen anyone worse?  Were they completely unaware of Carter’s background?  It’s truly shocking and sad that this irresponsible and unstable socialist beat a great guy like Jackson Miller. We need to get Carter out of the House of Delegates. Virginia and his constituents deserve better, much better.

[…] it no secret that he his an avowed Democrat socialist/communist.  Carter was more than happy to air all of his past indiscretions, whether we wanted to know or not.  Carter’s win took out the wonderful Jackson Miller.  […]