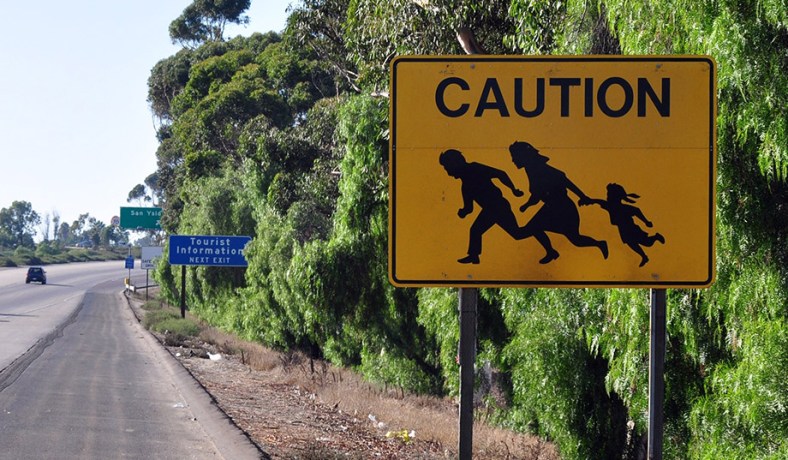 On a print from 1886 of the Statue of Liberty someone wrote, “There is room in America and brotherhood for all who will support our institutions and aid in our development. But those who come to disturb our peace and dethrone our laws are aliens and enemies forever.”

Times have changed fundamentally since 1886. Liberal Americans and the socialist Democrats of today are fighting the rest of the country to remove our borders, to disarm law enforcement, to pay for illegal aliens’ free healthcare, education, housing, voting rights, and every other benefit American citizens have.

Millennials devoid of common sense and their radical socialist representatives like Alexandria Ocasio-Cortez (D-New York) are openly calling for transforming our country into a Venezuela. It seems surreal that American citizens would want to live in the Twilight Zone of globalism or in a bad zombie apocalypse movie they so enjoy.

Of course socialist Democrats want open borders; millions of new illegal alien voters will help garner more representatives in the U.S. House and thus control it in perpetuity, with no Republican opposition, a type of California populated by 435 individuals who pretend to serve “we the people,” while silencing 52% of the U.S. population.

According to USA Today, “half of the 600,000 residents aided by NYC Care are undocumented immigrants” and New York City will spend “up to $100 million per year to expand health care coverage to people without health insurance including immigrants in the U.S. illegally.” https://www.usatoday.com/story/news/nation/2019/01/09/new-york-city-care-comprehensive-health-care-plan-concerns/2522924002/?utm_source=google&utm_medium=amp&utm_campaign=speakable&fbclid=IwAR0O71yHlujHVPQbUUg-eynNX0u7P_LAU1EYn3A9lZsE3eBuuYfUpT_YWNA

According to the Federation for American Immigration Reform (FAIR), the federal government expenditures on illegal aliens is almost $46 billion a year, the state and local governments spend approximately $89 billion a year, for a total of roughly $135 billion annually. Illegal aliens pay $15.5 billion in federal taxes, $3.5 billion in state and local taxes, totaling $19 billion.  FAIR estimates that the total economic impact of illegal immigration is a burden of $116 billion annually, money that should be spent on veterans and American low income families.

A one-time cost of $5 billion to build the southern border wall is a small sum when compared with such a huge yearly expense to maintain and provide for illegal aliens. President Reagan had promised this wall when he amnestied 3 million illegal aliens in 1986. But Congress never appropriated sufficient money for its construction. https://www.fairus.org/issue/publications-resources/fiscal-burden-illegal-immigration-united-states-taxpayers?fbclid=IwAR1QGopbIjMDBSTj5dhRkQvA4p_NtIihUKGx4om8DXpLFoOy5K_45uNx6vE

Recently, Rep. Alexandria Ocasio-Cortez (D-NY) made some bizarre statements on MSNBC. “Everyday immigrants commit crimes at a far lower rate than everyday Americans” and illegals on the border “are acting more American than any person who seeks to keep them out will ever be.”

The fact that we need a border wall is most vividly described by Americans who live in the vicinity of the border with Mexico.  A resident of El Indio, Texas, living half a mile from the border wrote about “15 men who pulled a gun on my husband and had a 13 year-old Mexican girl they had kidnapped from Guerrero. She had blood all over her and had urinated on herself. My husband was able to, with the help of the Border Patrol agents in a helicopter who passed over, get the gun from the Honduran man; they rushed the poor girl to the emergency room for help – she had been in fact kidnapped and gang raped by these men. We are kind people and believe in helping others in need but there have been three attacks on my husband on our ranch in the last three months.”

Schumer and Pelosi talk about “Trump’s manufactured drama with the border.” Adding more security at the border crossing will not help because illegals “are not coming through the borders, they are coming through mesquite and brush,” she added.

A wall will stop most illegal crossers even though some may dig under or escalate it. The Border Patrol needs help, the American ranchers need help, and Americans must feel safe in their own sovereign country.

If walls are “not effective and are socially unjust,” as the Democrats claim, why are rich people and most of Washington, D.C., surrounded by protective walls and barriers? If walls are not effective, why are there walls around prisons? Why do we have billions of dollars of privacy and noise cancelation walls around neighborhoods close to the highway?

There is a limit how many illegal invaders a country can absorb before it is no longer a nation but a socialist hellhole where the invaders vote for their free fair share of our confiscated stuff. As the progressive Mayor De Blasio said in his State of the City address, “Brothers and sisters, there’s plenty of money in the world. There’s plenty of money in this city. It’s just in the wrong hands.” Socialists are very fond of redistributing other people’s money and wealth but not their own. https://nypost.com/2019/01/10/de-blasio-theres-plenty-of-money-in-nyc-its-just-in-the-wrong-hands/

Liberals have asked me why a foreigner like me is against immigration. Illegal aliens are “undocumented Americans” but I, a legal American, am still a “foreigner.”

One problem with that question is that I am a naturalized American who assimilated into this country and learned the language which is something illegal aliens are not likely to do as they reject our language and our culture vehemently, they only want our welfare. They know very little about our country’s history and civics, vote illegally, and thus negatively affect the transformation of our nation into the third world corrupt dictatorship they’ve fled.

These illegal economic migrants are illiterate, can’t read or write in their own dialects, and are therefore no asset to America, they are not making it better with their presence; they are a drag on society. They depress wages and it costs our society too much money to care for them from cradle to grave. Once here, the chain migration explodes, each new addition becomes a ward of the state and of the taxpayers who must work more in order to pay for them. It is, in essence, a form of slavery for the American people to support illegals who never assimilate.

Millions of legal immigrants have waited patiently in quarantine at Ellis Island before they were admitted to this country. Being healthy and willing to contribute without the benefit of generous welfare was important for the health of the nation. But now liberals have decided that unvetted, criminal, dangerous, and sick individuals from around the world should come freely into our country infecting our children in schools and the population at large with diseases that had been previously eradicated in this country.

Illegals who manage to get across the border, flood ERs when they get sick, using the system as their primary care doctor since doctors in private practice do not treat people without insurance. Fearing deportation, many with serious illnesses such as TB, do not seek continued treatment and develop drug resistant forms of TB. Their unvaccinated children infect American children in schools, sometimes with strange illnesses that have never been seen in this country but that are endemic in Central America.

By law, illegals must be treated for free and translators must be provided, while veterans beg VA hospitals for their proper and prompt treatment, including care for cancers developed while in service to our country. One case in point, Johnny, was sent back and forth to two VA hospitals, miles away from his rural home, never received proper treatment for his prostate cancer and, once it spread to the rest of his body, one VA hospital offered care, but it was too late. Johnny passed away a few months ago.

According to the Washington Times, at least 50 people who arrive at the southern border each day need urgent medical care, including those with cases of pneumonia, tuberculosis, flu, parasites, and even pregnant women close to giving birth. These people had left their homes sick in hopes that smuggling organizations will bring them in less than a week to our southern border, dropping them off in western Texas and New Mexico, in areas less affected by the flow of illegals pouring into the U.S.

Washington Times cites the Customs and Border Protection (CBP) Commissioner Kevin McAleenan, that “The faster trip also makes it easier for sick people to come, and provides ‘confidence for parents to bring younger children as well.’” He also explains that those who came, “needed help, were ill when they arrived at the border.” If they die in custody, the Border Patrol is blamed for mishandling their care. https://m.washingtontimes.com/news/2018/dec/31/number-sick-kids-soars-border/?fbclid=IwAR0duxXqe3jYdhg8g82QByxurBX8Du2Zv-ZC9zhYEk4P_O3jZvsYlyEB1cg

I am against ILLEGAL immigration. There is nothing wrong with being called an “alien.” I was once a legal alien myself. But illegal aliens have become a protected class sent to the head of the line by progressivism and politicians in this country. Four million LEGAL aliens are awaiting patiently the dispensation of their legal immigration files at the end of the line because the lawmakers, the courts, governors, mayors, and cops in sanctuary cities and states refuse to enforce the immigration laws currently on the books.

President Trump is the solitary wall that is protecting this country in so many ways from a full-blown communist takeover. He has managed to slow down the tide but the march to Sharia Law continues with the election of two Muslim representatives who have made it clear already that they are not necessarily representing their American constituents but the interests of various foreign cultures, imaginary countries, and theocracies.