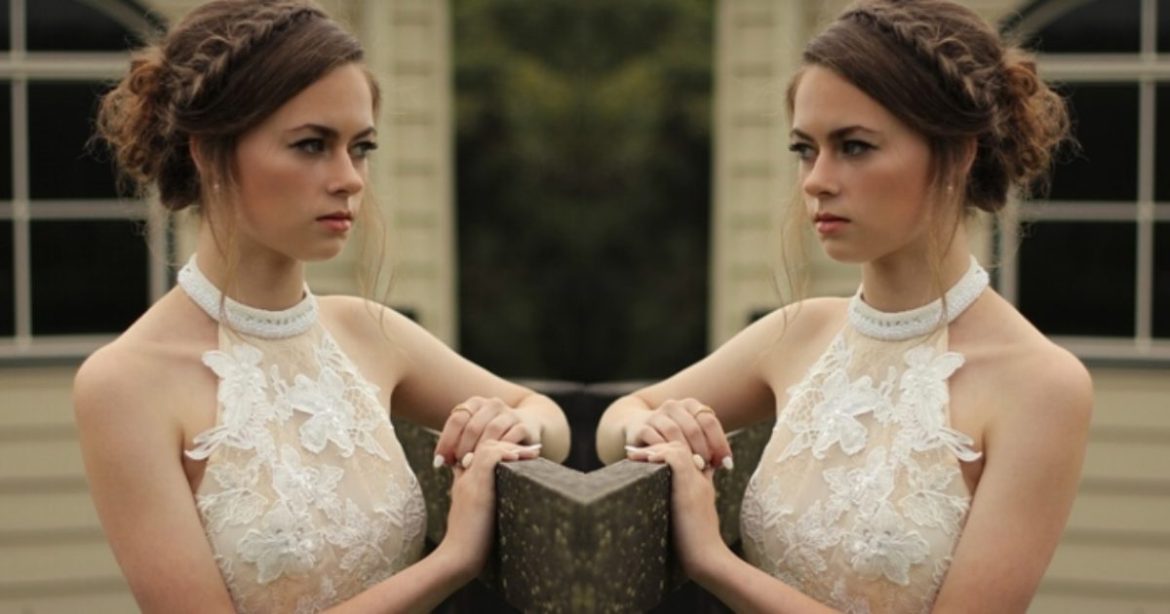 Sologamy can be defined as marriage to oneself, done by mostly feminists who haven’t found someone who will marry them.  It is a growing trend among lonely, sad, women and a few men.

Sologamy is the marriage of someone to one’s own self — the his- or herness of it is not relevant, although it seems to be mostly women who are doing it. Apparently Linda Baker was the first person to marry herself back in December 1993. Others have followed suit, including Sara Sharpe, who wrote about her self-marriage in A Dress, A Ring, Promises to Self. And there’s Nadine Schweigert, a thirty-six-year-old-woman from Fargo, North Dakota, who was interviewed by Anderson Cooper after marrying herself in front of some forty of her closest friends. “I, Nadine,” she said to herself, “promise to enjoy inhabiting my own life and to relish a lifelong love affair with my beautiful self.” Jennifer Hoes is a Dutch woman who did the same thing in 2003. Her same-self marriage was the subject of a recent ten-minute documentary by Aeon Magazine.

Who knew that this self-marriage has been going on for over 20 years?

In the new, sad trend called “sologamy,” women are committing themselves to themselves with their own wedding ceremony. These women, such as self-styled “sologamist” Erika Anderson, throw on a white gown, invite their close friends and family and marry themselves in a legally nonbinding way.

“I would describe it as women saying yes to themselves,” Anderson, 37, toldWUSA9. “It means that we are enough, even if we are not partnered with someone else.

“You’re worth it!” added the feminist.”

Anderson said she grew tired of people asking why she was still single. So, in front of family and friends she married herself,” notes WUSA9.

If you are unsure how to arrange a marriage to yourself, visit the website imarriedme.com where you can buy a planning kit and a wedding ring.

What happens if the marriage doesn’t work out?  Can one get a divorce and have a real wedding to a man?

You can’t make this stuff up. You can read more about sologamy here, here, and here.

I just cant even….

Fine by me. I wonder what they do when they nag themselves to the point that they sleep around on themselves, file divorce papers on themselves, and end up taking all their money and running off with the pool guy. I mean nobody, including them, wants to be married to some pain in the ass that would marry themselves.

Nothing like growing old, alone, crying into a beer at the bar, because you dragged yourself through a lengthy divorce and took everything you owned, including the dog.

I could maybe date me, but I think that’s as far as it could go, there’s really no long term future in my relationship with me. Sure, I could take me out on a few dates, maybe go see the new wonder woman movie that is coming out, but it could never last. Relationships are built on trust, and I’m pretty sure I’d cheat on me with the first pretty girl that tried to seduce me.

That is pretty funny.

These women need to be treated for a psychiatric disorder. Anyone so narcissistic and self-absorbed to pretend to marry herself is desperately seeking attention and clearly will go to extremes to achieve it. What comes next to seek even more and more attention? Without psychiatric help, there’s no telling to what ends they would go to.

I wonder how the IRS would treat this. Are these people bringing the marriage penalty on to themselves?

I guess next people can be their own children and qualify for government benefits.

Get out of the house for Petes sake , that doesn’t mean go to a bar. If you are looking for marriage for family;
Don’t rush to find marriage
Live with the values that allow proper marriages to thrive and be successful then marriage will find you.
Put Tom Hanks on a island and suddenly everyone wants to marry a volleyball,
” Wilson come back”

WHY are so-called ‘conservatives’ so upset when different groups and different people want to participate in the ‘conservative’ social/legal contract of marriage?

Who’s upset? I feel sorry for those poor women.

A marriage of ONE? Makes no sense at all.

What consenting adults do is their business. But marriage is a Biblical thing. So a marriage of one is mocking God. That’s why we get upset.

This is insanity, and definitely not participating in the “social/legal contract of marriage.” Marriage requires two people in both the societal and the legal sense. These women are too self-absorbed to allow a second person to be involved in the so-called “marriage.”

You do realize, don’t you, that your manner of arguing that marriage is ONLY what you believe that it is …. is the same manner of argument that pro-abortion arguments make: the unborn infant is NOT a human person because they don’t believe that it is a person. If you want to preserve marriage as a serious social/legal … and MORAL …. contract, and if you want to preserve the human dignity of the human person …. you’ll need to come up with better arguments. A strong argument is from the God-given liberty of human persons: that God has given liberty to human persons allowing them to choose wisely or unwisely, to form their relationships, to respect life or not to repeat life. When asked to respect others, most people – most, not all – will try to become better and wiser about respecting others, SO LONG as everyone is equally respected. Americans have a Constitution and many laws that summon that better and wiser behavior by treating each person as equal under the law BUT as we all see the elites – particularly moneyed elites, and White Supremacist elites – have engineered laws to look fair that are not fair. Trump promised to ‘drain that swamp’ and has spend half a year wasting time tweeting and twitting and bowing to Saudi kings and making money for the family fortune, looking like a loser, and a liar, so far.

Despite your arguments, which veer seriously off topic, marriage requires people by its very definition. “Marriage” to an inanimate object cannot truly be considered a marriage at all. If these women can marry a building, why not a potato, or my backyard fence?

This is equal opportunity under the law – everyone is equally entitled to marry another person and equally prohibited from marrying a building. I can assure you that the government doesn’t consider these women married under the law.

We are presenting arguments from philosophical and sociological perspectives. You are returning to the logic of law. They are different theoretical foundations with the law being more strict in deployment of language. Laws generally have much more constrained meanings than philosophical topics … but it would probably be a ‘bad’ law is no one knew clearly what it meant. On the there hand Constitutional principles are broad: For example, the Founders would be surprised to know that 21st century Americans take the 2nd Amendment to mean that ‘jane smith’ wants to carry a armor piercing machine gun for her own protection when she goes to by kale in the local church farmer’s market.

Since marriage is a legal contract in addition to a moral contract, it was only natural that I concentrated on that aspect. if it’s not legally permissable, your desire to justify it is really a moot point. Nevertheless,. I’ll play along.

No matter whether you are speaking from a legal, moral, or philosophical viewpoint, marriage is a relationship between two people. Until a short time ago, it was a contract between two members of the opposite sex, but society expanded the definition so that it is between two people regardless of gender.

Now you claim that the definition must once again be expanded – this time to include a relationship between a person and an inanimate object. Ignoring the issue that a woman cannot consummate her “marriage” to a building or a potato or my backyard fence, there are also the issues that the inanimate object cannot have feelings toward the other party or enter into any kind of agreement because it is unable to think, make a commitment, or enter into a contract. Since we accept (legally, philosophically, and morally) that both parties must agree to marriage, both parties must be human because inanimate cannot consent to anything at all.

If we accepted that consent was a non-issue as you seem to believe, then adults could also marry very young children. Will you also argue for the right of a 30 year old man to marry a 4 year old little girl and consummate the marriage?

OBVIOUSLY, from even a high school level of education, we know that you are reporting out historical bias. EVEN high school students know that marriage has historically been a
1. means of finance – using traditions and laws about bride prices and payments and transfers of property or wealth, or requirements that brides perform free labor, and even abuse of the labor (beating wives brought into the family, setting wives on fire if they did not satisfy the requirements of labor, etc)
2. a means of social control (of gender, or sexuality, or race, or tribe, or class, etc) – American White Supremacy chattel slavery did not allow enslave ‘opposite sex couples’ – as you say – to marry and in fact by law required them not to marry, for owners to rape female (and male) slaves even if they were know to be attempting to live as a ‘wedded’ couple, and allows masters to sell partners from one another and to sell children away from parents;
3. a means of diplomacy – husbands and wives bartered in war, in giving and receiving territory, as hostages, etc
So EVEN A HIGH SCHOOL education knows that you are very very VERY historically blind. The question is: why did you INTENTIONALLY leave these facts out? These are not FAKE FACTS … as the White House is fond of calling FACTS that it does not like.

By the way, the only president who bowed to the Saudi king was Obama. Trump merely shook his hand.

BUZZER WRONG! I SAW with my own eyes that Trump bowed head and shoulders as his Overlord King put a foreign medallion on him. WITH MY OWN EYES I SAW THAT.

This society has indeed gone crazy. People are just lost. These trends are based in a lack of faith in a creator. Sad.

My nephew married a feminist. He divorced her less than a year later. I dated a few feminists years ago when I was single. I learned my nephew’s lesson a lot more cheaply. No matter what you do around a feminist, even if you do it exactly the way she says, it will never be right. Which is how feminists end up marrying themselves.