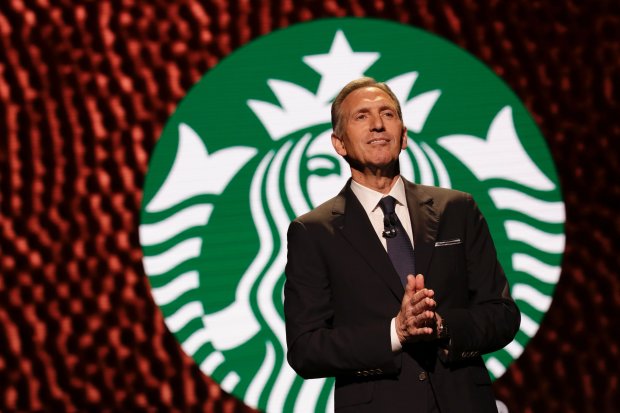 Some Sanity From the Ultimate Social Justice Warrior

“There’s no for-profit business in the world that could sustain itself or survive with $20 trillion in debt”.

“The greatest threat domestically to the country is this 21 trillion in debt hanging over the cloud of America and future generations….. The only way we are going to get out of that is we’ve got to grow the economy, in my view, 4% or greater.  And then we have to go after entitlements”.

“It concerns me that so many voices….. are going so far to the left I say to myself ‘how are we going to pay for these things in terms of things like single payer – people espousing the fact that government is going to give everyone a job.  I don’t think that’s realistic”.

Sounds like a conservative Republican talking.  The focus on debt could have come straight from me.   This country can survive a lot of things. But no nation can survive excess debt.   But no, these great quotes are from soon to be former CEO of Starbucks Howard Schultz – talking about his own party, and how it has moved too far to the left.  Mr. Schultz, who never met a social cause he didn’t like or jump on, who never met a conservative who he didn’t trash, who does not want anyone who thinks outside of his narrow views inside any of his Starbucks coffee houses, has accused the Democratic party of moving too far to the left.

Mr. Schultz has hopped on board more SJW causes than Meathead from All in the Family.  (SJW = Social Justice Warrior aka someone who can only talk identity politics 24/7 and who believes that the USA is the most fundamentally evil nation ever founded). Remember it was Schultz who has done matching donations from his employees to Planned Parenthood, the number one killer of black babies in the USA, and then calls whites racist and thinks we need to have a required conversation about race.  He publicly rips a store manager in Philadelphia who had several African American youths removed and then arrested because they were taking up space in a Starbucks store and then refused to leave. The list goes on and on.

Some words of wisdom from yours truly for all involved:

For Mr. Schultz – glad to see you partially live in the real world.  However if you were thinking of running for President – trashing your own lunatic base is not the best way to go about it.  Barack Obama and Bernie Sanders have moved the party so far to the left that the modern day Democratic party has more in touch with the USSR than with the European countries they say they want to emulate.  Get to know your own customers – they hate all things America and believe that the USA is the worst nation ever founded, and they want to destroy what made you rich and them comfortable to feel better about their pitiful lives.

For the SJW’s – your own hero thinks you are misguided and need to grow up.  Are you still going to spend $4 on overpriced coffee? If you really care about the poor, take that $4 and give it to a reputable charity, or better yet, work for that charity instead.   Unless of course you really don’t care about the poor and just want to be seen as cool in front of your pathetic loser friends.

For the Democratic party – when you’ve lost the most famous SJW since Meathead, all is not well in Paradise.

Some Sanity From the Ultimate Social Justice Warrior was last modified: June 6th, 2018 by John Massoud

Shultz is not talking to the left, he is talking to you gop voters.Because your vote is a trump vote unless he can fool you into voting for him. Here are the facts. Before 2025, that 20 trillion dollars will be over 30 trillion. There’s nothing anyone can do short of defaulting on the debt. When it comes to paying this off, a billionaire like Trump or shultz is just as poor as everyone else.

“There’s nothing anyone can do short of defaulting on the debt.”

Of course things can be done to keep the debt from rising from $20 trillion to $30 trillion. The three most popular choices include 1) grow the economy by over 4% per year, 2) tax more, 3) pay less out, especially in entitlements.

Saw this too. This dude is very representative of corporate America now. Virtue signaling, Identity politics. Promoting affirmative action with diversity coordinators like Michelle Obama was in Chicago, getting paid a quarter of a million bucks. Then add in people like Melinda Gates who says she is going to discriminate against white males with her forays into venture capitalism to promote women and minorities because tech is suffering without diversity! My God what a load of crap. The tech industry has plenty of diversity you billionaire married twit… H1B visas are everywhere moron.

And then add in corporations never ending attempts to eliminate borders and outsource jobs to countries where they don’t have to pay America wages, deal with American laws like the entire EPA industry OSHA or the Legal Industrial Complex we have built up. Boy those corporations will virtue signal about how they loove the environment… but then make all their products in China where you can’t see the sky on good day.

So to sum up, corporate America is full of crap. I doubt that this guy is going anywhere with that message despite its veracity. Yeah the US is drowning in future debt, but Bernie says you can have a government job, free college and health care.

Who do you think is going to win?

Where have we seen such private-public political partnerships in the past?

I know dozens of CEOs of large companies. Most are very conservative. However, most are also smart enough to keep their yaps shut about politics while they are CEOs. There are exceptions, particularly in the business to consumer space where the consumer product is heavily bought by younger Americans. Companies like Starbucks. But what are the political views of the CEOs of Pepsi, Boeing, Ford, Wal-Mart, etc? I have no idea because they are among the many CEOs who don’t see themselves as surrogate politicians.

Also, the article is technically wrong. Kevin Johnson replaced Schultz as the CEO of Starbucks in April, 2017. Schultz is stepping down as Executive Chairman. Given that, his only tie to Starbucks will be as a very substantial shareholder (I assume). He no longer has to toe the line of far left liberalism as part of his job running a company which targets hipsters as both employees and customers. CEOs and Chairmen of the Board have an obligation to their shareholders to try to reflect the views of the customers they serve. Or, if they can’t force themselves to do that, to shut up and quietly go about their business. Or, resign and say whatever they want. I strongly suspect Mr. Schultz’s “newfound” respect for fiscal sanity has been part of his political – economic philosophy for quite some time. After all, those billions and billions of dollars he has accumulated won’t do him much good if our money turns out to be worthless.

“I know dozens of CEOs of large companies. Most are very conservative.”

I used to assume so too, but now I believe that is not true at all. Even some of the largest defense company CEO’s are Democrats, and many of their senior staff are liberal/progressive. And the same is true of senior military officers and seniors in the Intelligence Community too. The common perception that most business and military leaders are conservative Republicans is wrong. If you’ve got data, I’m willing to be corrected, but I’ve never seen any such data, and my own experience is filled with dozens of surprising contradictions to that assumption. You’re right that most CEOs are smart enough to not vocalize their personal political views, which can fool a lot of people for a very long time. But they’re just people, like everybody else, with inexplicable political views.