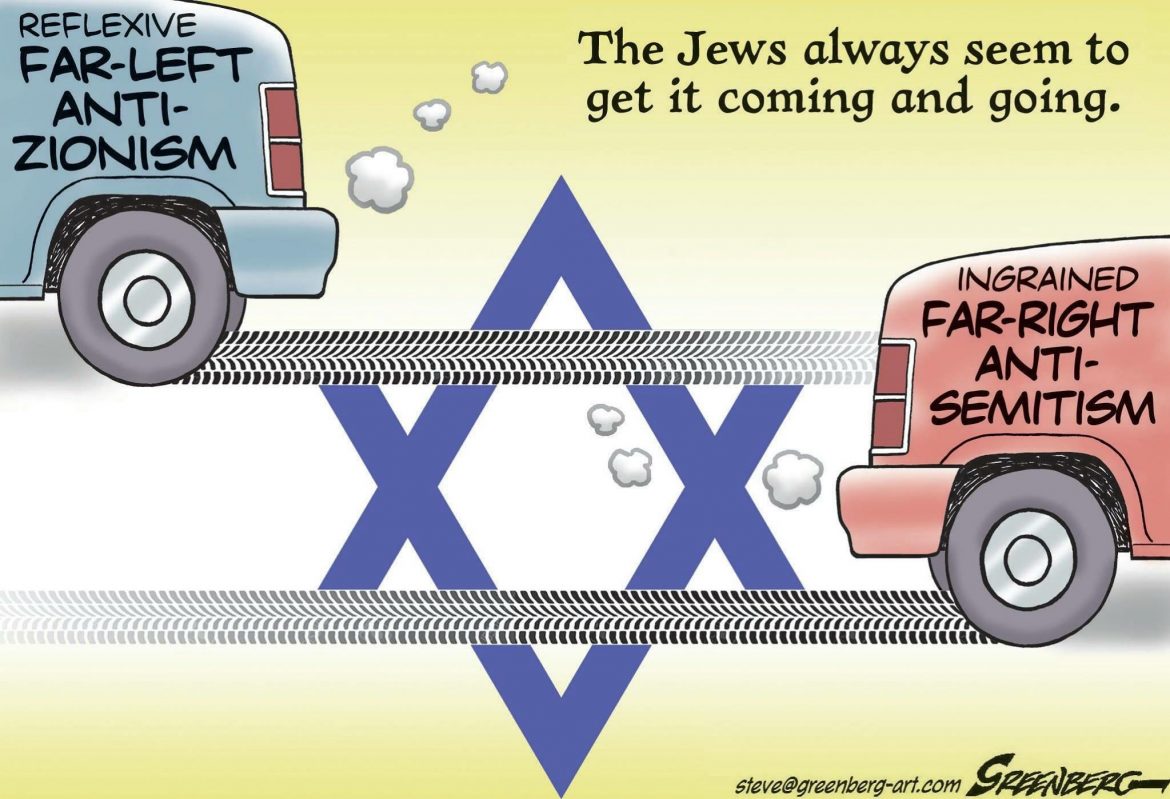 Some thoughts about anti-Semitism and the emerging anti-Zionist Left

The rabbi’s sermon at my synagogue last Saturday was devoted to anti-Semitism.  He wondered why “everyone worldwide is talking about it. I am not so sure I want that,” he said in jest.

He also said, and I agree, that anti-Semitism is going to be with us forever, at least until the Moshiach (Messiah) re-establishes a Third Temple and ushers in a true Messianic Era.

But while anti-Semitism seems to be on the rise, like most issues in the U.S. these days, liberals and conservatives differ on whom to blame.

Liberals feel anti-Semitic acts – such as the recent shooting deaths of 11 Jews at a Pittsburgh synagogue and swastikas painted on synagogues and gravestones – is all due to the rise of the far right and President Trump’s election in 2016.  To them, anti-Semitism is a right-wing thing, a la the Unite the Right rally in Charlottesville, VA in August 2017, not criticism of Israel nor support for more Palestinian autonomy. Liberals believe Minnesota freshman Rep. Ilhan Omar’s tweets and public statements about Israel and Jews were not anti-Semitic, and more due to her lack of “education;” after all, she was a Sudanese refugee.

Conservatives view Omar’s words about Jewish influence on Israel policy and Jews’ allegiance to a “foreign power”  as anti Semitic and feel the Democrats have abandoned their longstanding support for an independent Jewish state.  To us, anti-Semitism is a Leftist phenomenon these days, influenced by the universities, notably the Boycott, Divestiture, Sanctions (BDS) movement against Israel for its “oppression of the Palestinians.” BDS is openly supported by Omar and her fellow socialist Dems,  Rep. Rashida Tlaib (Michigan) and Alexandria Ocastio-Cortex (NY).

What is lost in all of this is WHY we are having this debate? It’s due to two things, in my view:

First, votes.  There is a growing non-white population in the U.S., which is not supportive of Israel nor Zionism.  This includes Muslims of which Omar is one. While Muslims are well integrated into American society, they harbor sympathy for Palestinians and feel they are oppressed by Israel, despite overwhelming evidence that non-Jews who live in Israel are better off than their fellow brethren in the Palestinian controlled areas.

The fact is the Jewish population of the U.S. (about 6 million) is not growing as fast as the non-white population, and Democrats know Jews vote Democrat out of allegiance (and ignorance, in my book).  So, Democrats feel they can “hold” the Jewish vote while apologizing or “justifying” the absurd and often racist or anti-Semitic comments of leaders like Linda Sarsour and Louis Farrakhan.

Hence, the Democratic leadership, including a number of Jews, agreed to water down their original resolution to condemn anti Semitism and Omar’s remarks by  including other forms of bigotry

Conservatives also see this issue as an opportunity to get votes, primarily from their conservative Christian base, which is gung ho Israel, and hopefully bring in Jews who are more pro-Israel.

Second, it’s difficult for liberals to view anti-Semitism in the same vein as racism or anti LGBTQ because Jews in the U.S. and much of the world are by and large well off and white, and the Holocaust is fading from memory.  Multiculturalism and emotions for the underdog prevent Democrats these days from seeing any real problem with anti Zionism, BDS or anti-Semitic language to convey a point.

Plus, Israel has become a successful high-tech nation, no longer a ragtag group of Holocaust survivors, tilling the soil on kibbutzes, and fending off the Arab Legions with antiquated shotguns.

Israeli Prime Minister Benjamin Netanyahu said it succinctly in a speech to American Jewish organizations last month:   “There is one problem that we face and …it’s the resurgence of anti-Semitism…It parallels the success that we’ve talked about in Israel… I think that we have to call it very simply and very clearly, anti-Zionism is the new form of anti-Semitism,” he said.

Liberals tend to side with the underdog and the “Multiculturalism Mob” in this nation see people like Omar or Tlaib as victims, not Jews or Israel.

Progressive secular “self hating” Jews tend to side with the Mob and make it difficult to for any bipartisan efforts to support Israel, as Leftwing Jews seem to value liberalism, diversity and electing Democrats more.

There is no question in my mind that the KKK, alt.right and neo-Nazis are dangerous people.  They have proven they can be violent, and are the major cause of the anti-Semitic incidents and attacks in the U.S.

However, these groups have no chance of gaining political office. Democrats, however, do.

Virtually all of the Democratic candidates for president supported Omar while feigning support for Israel.

So, as a Jew, I don’t wake up every day thinking someone is out there to kill me, either on the Left or the far Right. However, I do fear the growing anti-Zionism among Democrats and their liberal establishment apologists in the media, Hollywood and academia threatens to ensure the U.S. keeps its staunch military and economic alliance with Israel.  We can thank former President Obama for starting this.

Only the Republican Party stands in the way of America abandoning the only true safe haven in the world for Jews to flee if they are threatened.

Some thoughts about anti-Semitism and the emerging anti-Zionist Left was last modified: March 11th, 2019 by Guest Contributor Ken Reid